My Meds Make Me Fat—But They're Worth It 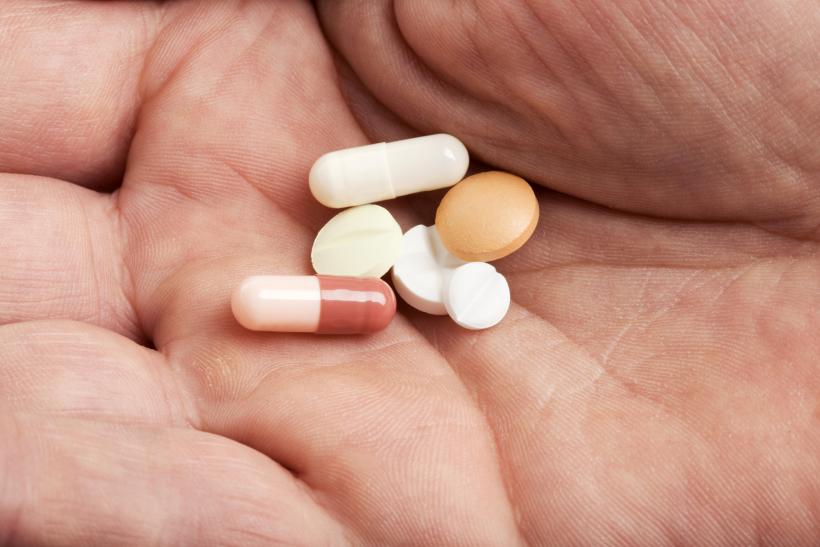 Right now, I'm still taking my AIs as I struggle to accept my new body. I suppose as women, we're always going through some sort of metamorphosis, aren't we?

I wasn't always on aromatase inhibitors—AIs for short. They're a class of drugs which stop estrogen production in postmenopausal women who've had hormone-based breast cancer like me. AIs come with a host of lovely side effects including joint pain, mouth (and vaginal!) dryness and osteoporosis. Weight loss is another. So is weight gain, which I've been lucky enough to experience.

But there's also another nifty side effect—not getting breast cancer again. Although AIs are not a 100% guarantee against recurrence, studies show that they give an extra layer of protection against hormone-based cancers returning. So, I keep taking my tiny white pill every morning.

But it's almost like I'm living in another person's body. I always had a generous bottom, even when I was a toothpick. Now, I actually have a gut! When I sit on the toilet, it's like someone soft and squishy is sitting in my lap. Sometimes, at night, when I'm especially bloated I think I look like I'm in my second trimester.

But my meds are keeping me healthy, keeping cancer at bay, so I religiously pop 1 mg of Arimidex daily. I could try another AI but they all have similar side effects. And to me, it's like the devil you know and the devil you don't.

A few friends broke up with their AIs because of the side effects. Nancy stopped taking them after two and a half years—the recommended length of treatment is five to ten. She had a recurrence three years later and died three years after that. Ellen didn't like how she felt on Arimidex and Tamoxifen and stopped after only eight months. She's still alive and kicking ten years later, though.

Right now, I'm still taking my AIs as I struggle to accept my new body. I suppose as women, we're always going through some sort of metamorphosis, aren't we?

In my teens, I was painfully skinny, five-five and barely 100 pounds. I couldn't gain weight if I tried—and I did, wolfing down gobs of Chinese roasted pork with rice washed down with a Carvel black and white milkshake for lunch. Despite my efforts, my hipbones were painfully sharp and my pelvis even had an inward scoop to it.

Gradually, I softened into a more womanly body. At age 35, I suddenly realized I was a size 12, and wondered how that happened. Where did Skinny Chick go? Welcome to Middle Age, I guess.

Then came a late-in-life pregnancy at age 39. I managed to lose most of my babyfat—from 172 pounds I went down to 147 as a nursing mom. But after David was weaned, I continued to eat like I was eating for two. When I tipped the scales at 163, I decided to make some changes. My new physique made me feel matronly. Plus my arthritic left knee was even more wonky from the extra pounds.

Reluctantly, I joined a weight-loss group and kept track of what I ate through a points system. It wasn't as bad or as hard I thought. It helped me make a conscious decision about everything I put into my mouth. It wasn't that I could never have a brownie again but at 7 points out of my daily allowance of 26, I thought long and hard about a Tollhouse cookie (3 points) vs. banana (0 points).

Slowly, over the next 18 months, I went down to 147 pounds, losing 16 pounds, wonderfully close to my goal of shedding 20. But then I got blindsided—I was diagnosed with breast cancer in 2013. Suddenly, my focus was not on my weight but on staying alive. The meeting facilitator at SHARE, the support group I attend, told us that most women gain 10-15 pounds post-diagnosis. Why? The delicious combo platter of stress-related eating and cancer-fighting drugs.

During my chemotherapy infusions, I was pumped with IV steroids to help combat nausea. Plus they prescribed oral steroids. I soon discovered that I was hyper-sensitive to them and found myself waking up in the middle of the night with my stomach grumbling. I chowed down on things like cold, leftover hamburgers and rice pudding. Late-night eating was something I never did, even when pregnant.

Overwhelmed by chemo and tracking points, I took a hiatus from the weight-maintenance program and focused on recovering to get strong enough for my next chemo session. I tried to bulk up on good foods to help build my flagging iron levels and white blood count. I wanted this ordeal over with ASAP and didn't want to delay an infusion because I was too weak.

The tactic worked . . . but I also gained 13 pounds. By the time my hair started growing back, I was a robust 160 pounds. Even more bad news: I had to take AIs, which had a reputation for causing weight gain. And you know the rest.

I was between a rock and a hard place: life (as a svelte survivor) or (possible) death if I didn't take the medication proven to keep people cancer-free. For me, it was a no-brainer. But then there was my jelly belly to contend with.

Back on the weight-loss program for more than a year, I've whittled down to 153 pounds. My oncologist says I wear it well—he was surprised I weighed that much. The nurses remind me to celebrate my cancer-free status. And yet . . .

I'm trying to rejoice in the fact that I'm still alive after a horrific few months of treatment. But with all I've been through, I'm not about to deny myself a piece of Godiva chocolate now and then. I'm also not going to poison myself with too much sugar, however. Breast cancer studies say that obesity could be a contributing factor but plenty of my slender sisters (vegans and veggies) have been diagnosed, too.

My solution? Focus on being healthy and happy, not on numbers on the scale. And I'll stay on my meds because being a little bit chubby is better than being a lot dead.