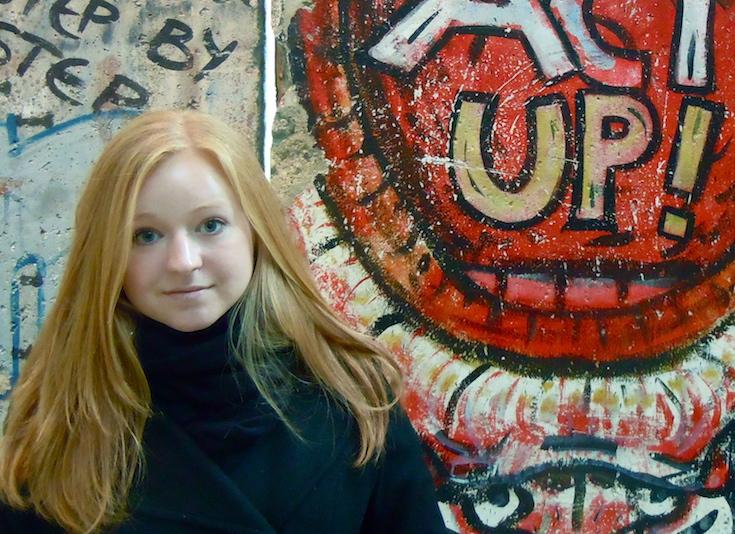 Kezman in front of the Berlin Wall

You know that age-old axiom that asks you to walk a mile in someone's shoes before you judge them?

If you're in need of said shoes and a map, 27-year-old filmmaker Laura Kezman is happy to oblige. This recovered anorectic is channeling the frustrations of her affliction into an intrepid documentary entitled, Just Eat. The film—which is currently seeking funding on Indiegogo—seeks to explore cultural misconceptions surrounding eating disorders, while offering newfound insight into the illness itself.

Kezman has wended her way through all kinds of media and journalism, beginning with studies in filmmaking and journalism at University of Wisconsin-Milwaukee before landing gigs with NBC, Al Jazeera English, National Geographic, and now as a producer for Norway documentary The Myken Project.

We caught up with Kezman to learn more about her motivations behind the film and what it's like to share her story. And in doing so, we realized something else: Eating disorders need to be discussed more than one week per year.

Many well-meaning, people will exclaim “just eat!” in hopes of getting through to their eating disorder-riddled loved ones. Can you explain to our readers why this phrase is not only not-so-help but actually rather harmful?

We agonized over that title! When we took a step back, we talked about misconceptions: What is prohibiting change from happening? "Just eat" is one of the most insensitive and traumatizing things someone with an eating disorder can hear. It’s harmful, yet it’s one of the most impulsive things an ignorant person can say. I think that statement is rooted in this idea that there’s a simplistic answer for people with eating disorders. Many think it's about food, image, and pursuit of vanity. The title is meant to call out those misconceptions; our film will challenge assumptions.

In your film “Just Eat”, you pose a question: “Why is the deadliest mental illness the least funded and the most ignored?” Did you enter the project with the same speculations you have today, or have they changed? If so, how?

The simple answer is no. I didn’t know the questions I was asking when I started this film four years ago (after I moved to DC for a job). The film started after I was brave enough to Google “anorexia.” Shortly after I did that, I realized that this wasn’t an unfortunate thing that just happens; it’s an epidemic that’s being reflected in the way our country is prioritizing it—which is not at all. I had a loose idea going into the film, but all I knew is that I had to do it.

Over time, the more serious questions have surfaced. Who is making these decisions? Why is it okay? Why are individuals trying to get help on the brink of hospitalization, yet insurance companies are denying them assistance for treatment? The more I immersed myself in the story on a personal and journalistic level, I realized no one was asking these questions. I felt angry at the injustice. People are forced out of treatment because insurance won’t cover it. I want to strip away this conceptual notion of what eating disorders are. It’s not about pressure to be pretty or thin—this is a public health concern. Let’s tell that story. 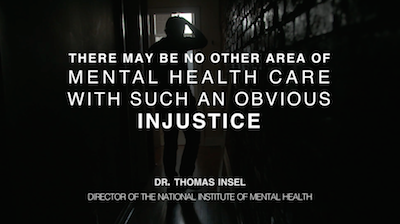 You mention that you suffered from an eating disorder previously. Can you give our readers a quick explanation as to the differences in the way you perceive your world when you were most affected, versus a period when you were less (or not) affected?

It’s a mental illness; it’s not a choice. If I were to recap, the first word that came to mind was “gray.” Everything felt like stone. It was dead. I mean, my world was absolutely consumed by this militant obsession—from the time I woke to the time I went to bed—with numbers and food. Life was happening around me, but everything was a daze. The physical effects of the disease started to reach me (lightheadedness, ringing in my ears, nearly fainting), but none of it mattered. My physical body was sending warning sings that what I was doing wasn’t sustainable, yet my mind was willing to overlook that because the drive to control what I was consuming superseded that.

I consider myself to be a rational person; logically, I knew that what I was doing was not sustainable. I knew I didn’t need to lose weight. It made sense, yet the driving force that dictated my behaviors were so strong that it completely eclipsed logic. Fear and anxiety (and even panic) were the driving forces. It’s not about food. It’s not about the image. It’s something much more insidious than that.

I'm not in that place any more. When I compare my state now to then, I feel gratitude. I am happy to be experiencing things as fully as I do now. Even in those vulnerable moments when eating disordered thoughts take hold again, I fight against them when considering how fulfilled I feel. Food is no longer the enemy.

In your preview, you discuss the difficulties you faced seeking treatment. What aspect proved to be most challenging? 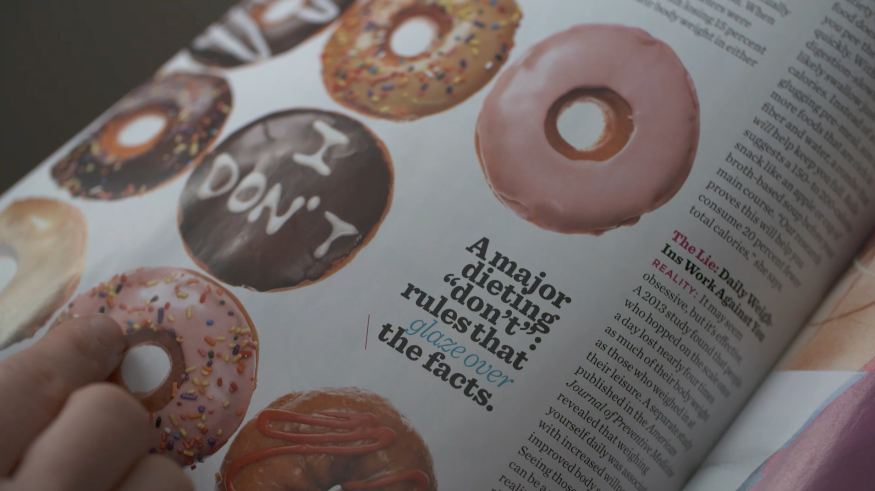 My family had difficulty finding help. Lack of resources worked against us in the beginning. My mom and grandmother were actively looking for places to take me, and it was so difficult. When my physical health was in jeopardy, my parents had to bring me to the emergency room. I bounced from doctor to doctor and no one knew what was wrong. All this was happening while I was trying to digest that I might have a problem. It wasn’t until later that we realized there was a inpatient facility right in Wisconsin (where I’m from) that’s esteemed—but we didn’t know that. We asked doctors/nurses where to direct us, and no one suggested it. My family stumbled upon it when they were researching my options. It was between $15,000 and $20,000 just to walk in the door. That didn’t include the actual treatment that would be needed. Resources and insurance coverage worked against us.

If I were to hand you a magic wand, how would you change the current landscape of eating disorder treatment?

Well, I think I would eradicate the brain anomaly responsible for eating disorders. If that’s being too idealistic, I’d make it so that treatment centers would inform doctors and have an intake fee of zero dollars. 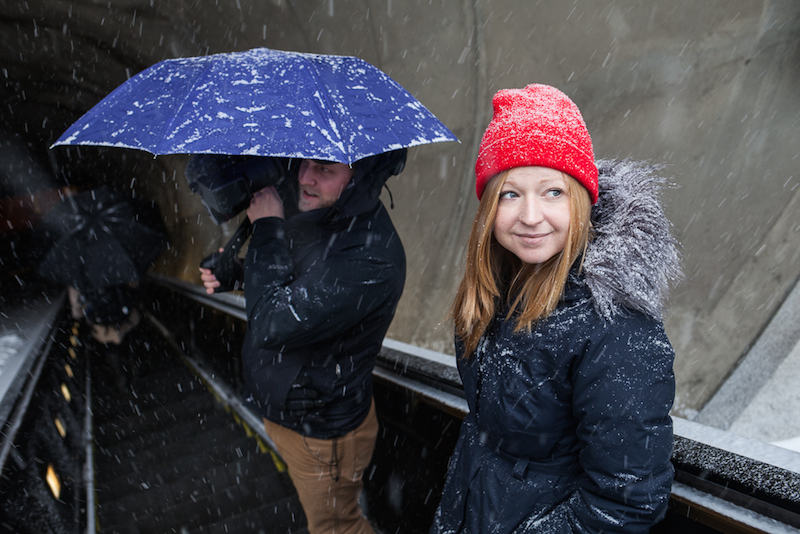 The notion of anorexia as a disease of the privileged has permeated our culture. In your opinion, what continues to keep this fallacy alive?

I think our understanding of most things is made available by the resources we consume. Information about eating disorders is out there, but you have to fight through some thick weeds to get to it. A tweet can even shape an opinion—we infer and draw our own conclusions based on 140 characters. Few people dig deep.

If we position ourselves to be consuming information that skewed against eating disorders (like an over-simplified story of a celeb who has an eating disorder), the same stereotypes continue to be perpetuated by our simplistic and misguided understanding. There is fantastic information out there, but it’s not made accessible; it’s not the top headline.

What were your initial goals with the film project and how have they evolved?

The initial goal was to start a new conversation about eating disorders that de-stigmatized the disease itself and generate a real understanding of what they are. While that is still a big part, I think it’s positioned itself to be a much more national conversation. We’re tying this to the dialog of mental health in the nation and the Affordable Care Act. What language in that will help those with eating disorders? What holes are there? It changes the way we’ve framed this film and asked these questions. Action items to change these things are possible. I think that this is a story that affects everybody; everyone knows someone who has an eating disorder, whether or not they know it. We are elevating this issue and having an honest conversation about it.

Kezman is nearing the end of her Indiegogo campaign. Click here to learn more or contribute.