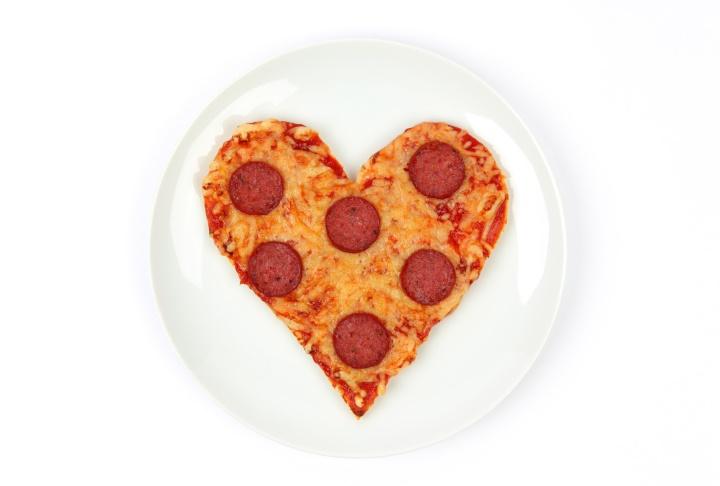 You’d think of all the sacrifices and characteristics becoming of the abstract of Love itself, pizza—or at least a calzone—would serve as some extension of the sort of thing we’d expect of Good Christian Folk.

This will hopefully be the last thing you’ll ever need to read about any controversy surrounding same-sex marriage or LGBTQ orientation and the freedom of businesses, fraternities, colleges, organizations, and people with money to discriminate against humans who may not be heterosexual and may want to enter into the lawful institution of marriage.

But I’m going to go out on a limb here and predict that it won’t be.

We’ve come a long way in just the last 20 years here in the West in terms of our views on religion and homosexuality (and the two being compatible), but we still have probably millennia to go if the last millennium has taught us anything. Each election cycle, both sides of the political aisle find new ways to hold onto old ideas regarding the same issues. It’s what we do best.

Recently, and thanks to Glenn Beck’s The Blaze TV (which is not shown on actual televisions), Memories Pizza in Walkerton, Indiana, raised $842,387 on GoFundMe.com from roughly 29,000 donors as a way of supporting their right not to cater a hypothetical same-sex wedding. This followed the March 26 passing of the Indiana SB 101 Religious Freedom Restoration Act, which, in the 1990s, was originally created to let Native Americans consume peyote in congress with religious rituals. Is pizza good with peyote? Maybe like a half peyote topping?

The $842K may seem like small change to the business that Indiana would lose if Apple, the NCAA, Subaru, and Gen Con left the state, but I’m left with the question that I have every four years when the talking heads and the politicians wearing gold crosses start talking about religious freedom from parts of culture: what does this have to do with loving your neighbor?

Now forgive me for going simple on this one. But if we’re going to squash this debate once and for all, we have to get to the root: Christianity, mainly American Evangelical Christianity, with its heavy, swampy, long-lasting and syndicated cultural drippings, should have been, at one point, rooted in one maxim: Love Your Neighbor As Yourself. It’s literally all over the New Testament, and is referred to as the sum of the “Law and Prophets” and the “whole of the Law” according to what I thought was every church’s interpretation of their own club’s rules.

And yet they’re not serving pizza at a wedding? You’d think of all the sacrifices and characteristics becoming of the abstract of Love itself, pizza—or at least a calzone—would serve as some extension of the sort of thing we’d expect of Good Christian Folk.

Similarly, this past summer in Massachusetts, we saw Gordon College, a Christian Liberal Arts school, receive the same quick national attention and polarizing coverage after its President Dr. Michael Lindsay requested that President Obama allow Gordon to discriminate in their hiring policies, namely that they not be forced to hire gays, lesbians, and the like. Obama said no, but not before Salem, Massachusetts, Mayor Driscoll took on Gordon and Glenn Beck, who had already stoked the “Culture War” fires as he is wont to do.

Gordon College’s Code of Conduct prohibits, among other behaviors, “homosexual practice” as an antithetical-to-Scripture act. Pro-LGBTQ Christian individuals organized and formed OneGordon, which follows in the tradition of OneWheaton, the only other liberal Christian college to have a pro-LGBTQ organization, and only run by alumni.

Has the Love Your Neighbor Club loved themselves into such great wealth and prominence that they can deny pizza and employment at whim? What power!

Logically, and in the spirit of the Religious Freedom Restoration Act, an establishment that is owned by Christians, therefore, should pass some sort of purity test for its employees and customers, because you never know when someone may be of an ilk that is against just one of your religious beliefs, which, as a business owner, you’re entitled to discriminate against. In this case they shouldn’t serve any food, drink, or product that isn’t Christian or grown on Christian fields or manufactured in Christian factories, kitchens, laboratories, or warehouses by the faithful who are in lockstep exactly along hermeneutical lines. Also every tile, paint splash, table-top, countertop, menu, screen, placemat, receipt, and material used for said Christian establishment should be of Christian material made only by Christians and then driven by Christian drivers only on Christian highways in Christian automobiles and/or trucks. All clothing material must have a specific religious message printed clearly on it, and be made by believers of the same exact faith as the proprietors of the establishment, all while a soundtrack of Christian songs is played through sanctified speakers. Only the faithful will be served after a rigorous test has been administered and finds that the clientele is in good standing with the invisible powers that be. It’s that simple! (Note that in this scenario you can replace “Christian” with any religion, sect, specific denomination, or assumed-to-be-persecuted-cult).

Now, I don’t attempt to apply a “love your neighbor” philosophy to my life, although I’ve tried. I get along, nicely and kindly. I also avoid the whole “love your enemy” maxim as it has always confused me. Love is a tricky thing—I love my wife and kids, my immediate and extended family, friends, job, hobbies, and I have great care for my students and athletes.

I also have great compassion for the world over, and wish nonviolence and prosperity to all peoples. That’s as much as I can do. But I don’t have enough love for all my neighbors, not really. I’ll lend a tool or help shovel the snow if need be, especially if “neighbor” really means everybody, which it does if you listen carefully when the Club People really get going.

I’ve been privileged to officiate a few weddings, some of them being gay and lesbians weddings of people I love very much, including gay and lesbian members of the Love Your Neighbor Club. And while people and businesses have the right to discriminate against clientele based on their own discerning interests, they shouldn’t drag the name of Love into it. It just doesn’t make sense.

But Glenn Beck, Memories Pizza, and Gordon College have every right to discriminate however they want. That’s it. And people are going to support them, willingly; millions of people who vote and donate money will continue to do so, because it’s how they feel about it. And this will never change. Until they read this essay.

So—to those on the Right (including the Ultra-Orthodox Believers who feel persecuted and put-upon by laws that might not allow you to discern who you get to serve as your clientele or demographic): I get it. But you kind of run the game, and there are plenty of actually disenfranchised people out there who need the kind of cash you bring to the game. $842K would go a long way for a lot of people and businesses that wouldn’t act as shells for some political agenda. I’m sure the Love Your Neighbor Club has opinions on this.

And to those on the Left (including and specifically the Christian Left): for those of you who are wishing to grab the old religious dinosaur by its tail and transform it into a different creature, just know that it’s never going to happen. Just think of any religion other than the Unitarian Universalists and you’ll see that no one is going to change. Most of the world is ruled by old, dusty religion, which holds as its policy that men of old make the rules, and that the rules aren’t bending. Ever. So some shift has to happen, peacefully, if there is going to be some sort of new day of understanding.

I don’t have a perfect replacement for the Love Your Neighbor maxim, so I’ll steal the most appropriate line from my favorite Hoosier—writer and Humanist Kurt Vonnegut Jr. in God Bless You, Mr. Rosewater, where he writes, “Hello babies. Welcome to Earth. It’s hot in the summer and cold in the winter. It’s round and wet and crowded . . . There’s only one rule that I know of, babies – “God damn it, you’ve got to be kind.”

If love seems like an impossible commandment, try kindness. Or tolerance. And possibly a side of wings, depending on what pizzeria in Indiana you visit on your wedding day.

If you like this article, please share it! Your clicks keep us alive!
Tags
LGBTQ
sexuality
Love
Indiana
discrimination
law
same-sex marriage