The Despicable Trend Of "Feminist To Fuck" Men 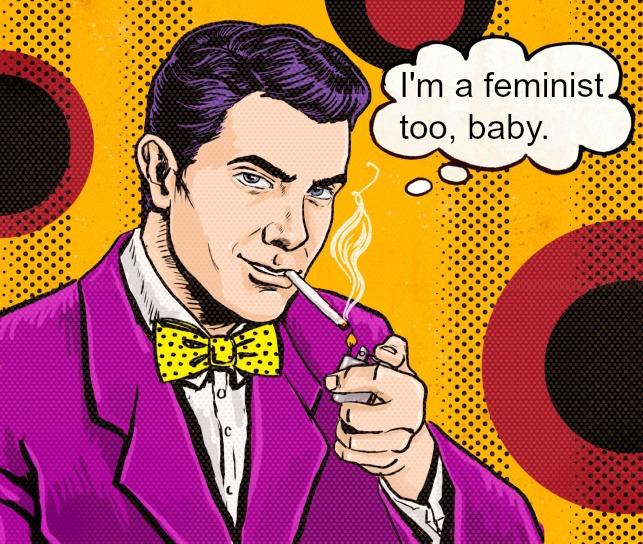 Feminism has evolved into the new "man at the park with a cute dog" or "man at the mall babysitting"—the latest cheap ploy to impress or lure a woman.

I used to be elated when men would identify as feminist. Now, I find myself on high alert.

During my own feminist journey, I've observed feminism become more palatable to all people, thanks in large part to celebrities like Beyonce identifying with the movement. But as more males have started to identify as feminist, something nefarious has happened: an increasing number of men have become "feminist to fuck." Feminism has evolved into the new "man at the park with a cute dog" or "man at the mall babysitting"—the latest cheap ploy to impress or lure a woman.

To explain this phenomenon, I decided to put out some feelers in my real life and Internet life, tapping into experiences with self-declared feminist males who—much like white allies to people of color—believe they gain a special snowflake type of status in female and non-binary feminist communities.

Tasmi Imlak, a friend with a substantial following as a young feminist, shared an experience relatable to me and many other women online:

"Being someone who is extremely vocal about feminism on Twitter, sometimes guys direct message me just to tell me that they're feminists. As the conversation goes on, it turns out they're trying to hit on me and using being feminist as some sort of pick-up line. This has happened to me on multiple occasions, and one guy even asked for nudes after telling me that he was a feminist."

Stella Boonshoft, who had a body-positive post go viral years ago, shared her own experiences with this epidemic:

"I've been hit on in person by self-described male feminists once or twice. And when I used to write a body-positivity and feminism blog, I got tons of emails from guys saying they 'believed in my cause' and stuff like that, and then would go on to say something pointless about how they personally are attracted to me or wanted to sleep with me. Which of course negated any claims they had about supporting my cause."

My friend Mariyam shared this story about one loud and proud "feminist" man:

"Well, this one guy on Twitter tweeted about how unfair it is that he has to wait in lines and women cut in queues (one of the few advantages of patriarchy that, nonetheless, itself comes from a place of sexism). He was talking about how women need to acknowledge that gender inequality is their fault as well at times. A couple of my mutual followers and I explained to him the harassment women are subjected to in public places, and if a woman gets the advantage to cut in queues and avoid that, then it's completely okay to allow her it.

He tried to tell us feminism means equality, as if it is all a mathematical equation and there aren't various factors at play. He said to me 'you're not a feminist,' and multiple women, five to be exact, came at him. He said we were all wrong.

Sometimes, the phenomenon is less egregious, but still annoying. I've had friends tell me, for instance, that they've stumbled on men on Tinder who use "swipe right if you are a feminist." Does that sentence really deserve a swipe?

I've also personally encountered men at alarming rates in social situations and when organizing online who use the very troubling universal "we." One even posted an Instagram photo about women that said, "We are 50% of the population, why aren't we equal" with no context. It makes me question whether these men are intelligently deploying a rouse, or if they possess weak reading comprehension.

Many male feminists I've encountered will also use "bitch" to describe women, while still holding power over said women due to their male identity. Specifically, I've seen the term used to describe women who choose not to ascribe to feminism . . . as if this makes it okay to deploy a word with a loaded history of oppression.

I'm not saying men should have no role in the feminist movement. But since these are clearly not the right ways to engage with the cause . . .  what is?

To delve deeper into the issue of how men should engage with feminism, I chatted with a few guys I respect to get their opinion on where they fit into this ever-evolving movement. When I asked Ali Elabbady if he was a feminist, he said this: "That's more up to the people I love and respect to determine. I cannot brand myself as a feminist or an ally, simply because it's not my place to do so."

Robert Bivouac, a pal who regularly helps me with my poetry, is someone I have long admired—but I have never really delved into his views. When I asked him whether he identifies as a feminist or an ally, he responded:

"I don't like the use of the word 'identify' in relation to feminism, so the best I can say is I've been aligning myself (as an act, rather than the positional connotation of 'identify') within feminism. My main concern in this area—what I can do as a man—is detoxifying and breaking down traditional masculinity through intersectional lenses into something more inclusive, in order to do less harm to non-men, non-masculine people, and men themselves.

I don't identify in relation to feminism. As a cis man, I feel I can't call myself a feminist or an ally. I don't mind being referred to as either, but I don't think I have the right to use either term for myself. I try to align myself within feminism, and if you had to assign me a term, I'd choose 'advocate for feminism' as opposed to 'feminist' or 'ally.'"

I also asked him about whether he's observed men cross lines, and found his views largely resonated with my own:

"I do believe, however, that when a man weaponizes feminism against women they don't like or against justified criticism, or uses it as a tool of manipulation, or assumes a primary/majority leadership role in place of a woman in a feminist organization, that isn't right. Using sexism against women, or in fact any other bigotry against any other marginalized group, in the name of feminist criticism isn't cool either."

Robert also had some great advice for other men:

"Do the work. Talk to other men about it, and try to dismantle traditional, anti-intersectional masculinity in your own lives and the lives of the men around you. Think about it, and organize around it. This is your lived experience; this is where you lead. At the same time, listen to, assist and learn from non-men, but don't be afraid to challenge bigotry from anyone of any gender as long as you aren't being bigoted about it yourself."

Joe Clinkenbeard also struck a chord with me, saying, "In passing, I identify as feminist the same way I fly other flags when prompted, like socialist or vegan. But I don't conflate the underlying allyship with actually struggling under the patriarchy."

These enlightened views shouldn't be rare; in fact, they seem utterly logical. Yet many men have adopted "feminism" at best insincerely, and at worst as a tactic to bed women (or snag some nude pics of them).

The fact that women now have to be weary of men who claim to be on the winning team is detrimental not only to the feminist cause, but to men who genuinely believe in the tenets of that cause.

Stella added something else worth emphasizing:

"Feminism that caters to men is not important to me. I think that any men I've known who truly align with my politics have shown their alliance in their actions, not a self-congratulatory title that screams 'I'm not like those other guys!'"

Or, as Kelley Temple, National Union of Students UK Women's Officer, has eloquently said: "Men who want to be feminists do not need to be given a space in feminism. They need to take the space they have in society and make it feminist."

If you like this article, please share it! Your clicks keep us alive!
Tags
feminism
men
feminist
males
sexism
feminist to fuck

How Do You Pronounce That? The Struggle Of Having A Unique Name
Nashwa Khan

The Trivialization Of Trending: Sexual Assault On Campus
Nashwa Khan

The Despicable Trend Of "Feminist To Fuck" Men
Nashwa Khan