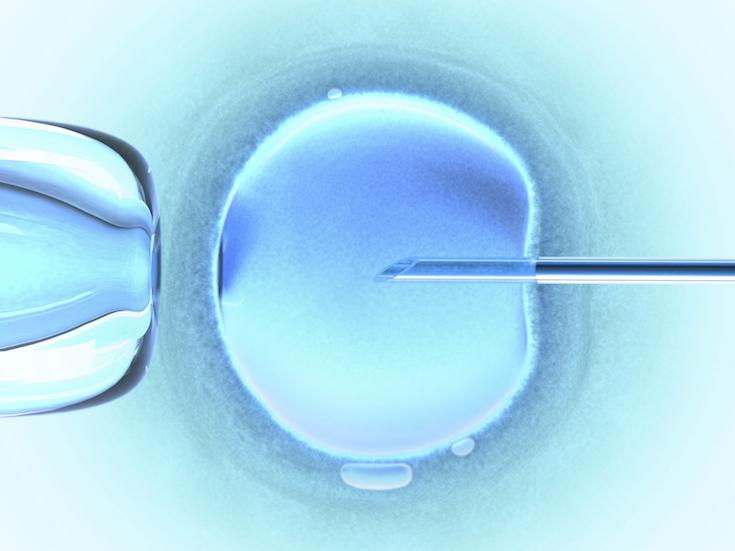 I'm not going to mince words here: Human life begins at conception, but human rights do not.

If you bristle at this idea, and feel uncomfortable removing rights from discussions of human embryos, you probably feel that way because of a longstanding tactic used by conservatives (and, let's face it, men) that grants rights to embryos, as a means of systematically stripping rights from women.

It's simple, really. If you can muddy the waters enough, and espouse concern for the rights of those poor defenseless embryos enough, what should be a simple statement about the rights of women to make choices for their own bodies becomes, instead, a convoluted argument around viability and fetal stages that puts the presumed "rights" of fetuses on an equal footing with the actual rights of adult women. It's diversion at its most basic form.

While this tactic has long been used to deny and restrict access to abortions, it is now being used against a woman in regard to her frozen embryos. Modern Family Sofia Vergara has been in the news recently after her ex-fiancé Nick Loeb filed a lawsuit to "protect" the lives of two frozen embryos they created during an IVF cycle in 2013.

In his opinion piece last week in The New York Times , Loeb argues that he should be given custody, so to speak, of the frozen embryos because they are human lives and should not be treated as property. Instead, he says, they have the right to life.

Of course, what Loeb fails to mention is that IVF is a process that creates many, many embryos. After eggs are harvested from a woman's uterus, they are combined with the man's sperm sample. The resulting embryos are then grown in a culture for at least three days, and often five, before attempting an embryo transfer. Along the way, it is not rare for many of the embryos to simply stop growing. As my Reproductive Endocrinologist told me before my first IVF cycle, whether in nature or in a lab, "humans make crappy embryos."

In the case of Vergara and Loeb, by Loeb's own account they underwent two rounds of egg retrievals. Their first retrieval netted an undisclosed number of embryos, all of which died either before, during, or after the transfer to a surrogate. Their second retrieval netted these remaining two embryos, which were frozen, but Loeb fails to mention how many embryos were created in the lab, to get these two embryos, healthy enough to freeze. Those lives were apparently less important to Loeb.

Instead, of course, Loeb creates a narrative that glorifies the supposed "rights" of these embryos, frozen only 3-6 days after conception, and speaks more of his childhood and reasons for desiring fatherhood than the children he hopes to conceive. It would be tricky, really, for Loeb to talk much about these children since that would require deep ethical discussions about creating children expressly against the highly-publicized wishes of their mother. That conversation wouldn't suit Loeb's purposes, and so instead he focuses on the easy argument, and the one that anti-choice crusaders have already clearly outlined for him: the rights of the embryos to life.

I had three egg retrievals myself. I have children born from IVF, and have watched a little light flash across an ultrasound screen, as the embryos were transferred into my uterus. Those moments weren't exactly traditional, but they were sacred all the same. Yet, what made them sacred was not the rights of those tiny 8-celled embryos to life but the shared commitment of my partners and I to creating those lives. We are not together anymore, but in that moment, on that day, we were united in our desire to have a child.

Like Vergara and Loeb, we were told at length of the legalities involved in IVF. We signed multiple consent forms. And we have frozen embryos that are now many years frozen. Now that I know I have a genetic disease, they will remain frozen indefinitely - and, like Vergara, that is my decision to make. Not because my rights trump my ex's, but simply because any action involving frozen embryos requires the consent of both parties.

I understand that having frozen embryos can feel murky. They can feel like your children, or at least like you owe them the right to try. But they are not children, in the way that some of my transferred embryos have grown into children. They are multi-celled embryos who might one day become children, but statistically probably won't. Frozen embryo transfer success rates are low, and Loeb and Vergara already had two failed attempts.

Ultimately, we are all entitled to feel however the hell we want. What we aren't entitled to do is drag another person through a high-profile legal fight because we regret signing a legal document. Those feelings belong in a therapist's office, not a courtroom.

Furthermore, for all of Loeb's attempts to frame the issue around his embryo's rights, he betrays himself when he admits that "these are issues that, unlike abortion, have nothing to do with the rights over one’s own body, and everything to do with a parent’s right to protect the life of his or her unborn child." Loeb's concern ultimately isn't about his embryo's non-existent right to life, but his own perceived right to be a father.

Unfortunately for Loeb, parenthood isn't a right. Many couples struggle to conceive, and are never able to be parents. Unlike Loeb, many of those couples are infertile and IVF is their only chance at having a biological child of their own. Those are the cases where, as Loeb mentions, precedent exists for awarding custody of frozen embryos to a parent in court. But Loeb has none of these challenges, and instead is using the legal system to try to overturn the binding legal contract he signed, simply because he changed his mind. That isn't parenting, and it certainly isn't considering the needs and wants of the mother of the embryos or even the best interests of the embryos themselves.

While Loeb has every right to seek parenthood with a willing partner, Vergara is equally entitled not to be a parent until and unless she chooses to become one. And no amount of manipulating the system, preying on public sympathy, or crying about "rights" should change that. Women have rights- frozen embryos do not.

If you like this article, please share it! Your clicks keep us alive!
Tags
ivf
embryo
abortion
custody
sofia vergera
loeb