My Husband Is Dating the Babysitter And It’s Super Convenient 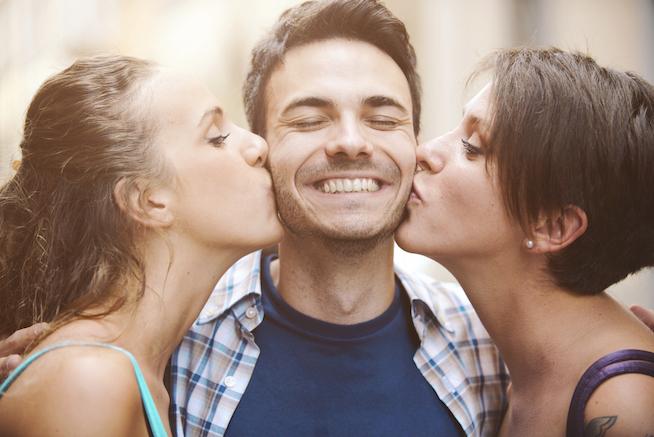 Jealousy and poly relationships … now that topic takes more than a blog post to address. To sum up: no, poly people aren’t magically inoculated against jealousy.

Trying to find opportunities for alone time as new parents is a classic struggle. My husband and I are lucky enough to have had a weekly ‘date night’ since our daughter was born. What's our secret? He’s dating the babysitter.

Well, technically, his girlfriend volunteered to babysit for us. Isn’t that sweet of her?

An open marriage certainly has its challenges, but finding personal time outside of being a parent is actually one of the great rewards. My husband and I have been polyamorous since we met, and I actually introduced him to the woman he is currently dating. When our baby was born, she offered to babysit so we could continue having our traditional date nights. On Sundays, the two of them have time together while I stay home with the baby. And sometimes his girlfriend comes over to spend time with him and our daughter, when I’m out with someone else.

Being poly requires a pretty organized calendar and a TON of communication, and we are finding that being parents requires the same. We try to plan ahead and make sure each of us is getting time alone and time to spend on other relationships, while trying to keep our marriage alive and healthy as well. Plus, parenthood itself can be quite the timesuck.

Is it all roses all the time? Of course not. After reading the Bitty Baby book for the tenth time and picking up blocks for the eleventy-billionth time this Sunday, I was more than ready for my husband to get home and help out, or at least talk over against that incessant whining noise coming from the toddler’s direction. But that’s much more a function of being a parent than being poly, and I would have been grumbling about any activity he was out doing, while casting myself as Mother Martyr.

Jealousy and poly relationships … now that topic takes more than a blog post to address. To sum up: no, poly people aren’t magically inoculated against jealousy. But we are educated about it, and we arm ourselves with the tools to deal with it, rather than ignoring it and hoping it will go away. Not long ago, my husband and I each gave the other person a whole weekend away. I had mine, and it was lovely. He had his, and I found myself vaguely green, thinking about the two of them in a cozy cabin.

What was the real problem? I didn’t plan ahead like I meant to, and was feeling lonely. I called up some friends and arranged some playdates, and all of a sudden the cozy cabin wasn’t a problem anymore. Nothing about them or their trip had changed, but I identified my own insecurity and took care of it.

So is taking up polyamory the solution to your difficulty in finding a babysitter? Okay, probably not. But it might help explain why we’re not joining your neighborhood babysitting co-op.

If you like this article, please share it! Your clicks keep us alive!
Tags
polyamorous marriages
polyamory
nonmonogamy
parenting

What It Means To Be Bisexual And Pass As Straight
Alexa

Why Poly Marriage Works...For Us
Alexa

I Love Breastfeeding, But I Miss My Sex Drive
Alexa