I Cannot Bring Myself To See Amy Schumer's Trainwreck 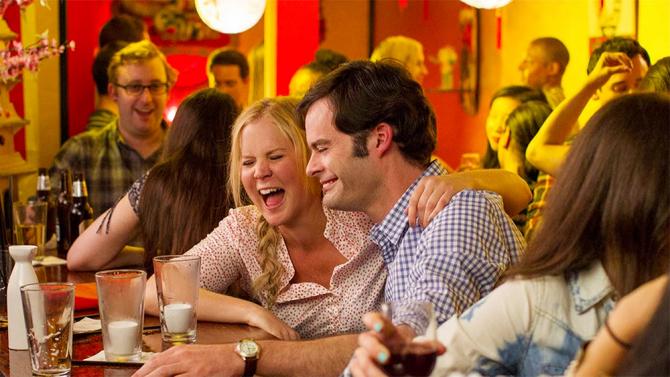 In developing a healthy sexuality, I had to stop looking at my sexual conduct solely in terms of consent. Instead, over the years, I’ve learned to view my sexual health in relation to a constellation of factors. Optimum sexual health, I’ve learned, means freedom from exploitation. For me, it means creating and maintain relationships built on honesty and trust.

I just can’t bring myself to see Amy Schumer’s new movie, Trainwreck. I especially can't bring myself to see it after reading this review on Electric Lit, in which writer Halima Marcus tells me that it’s exactly what I expect: Schumer plays an unapologetically self-destructive writer whose disinterest in social norms, including romantic commitment, leads to alcohol induced hook-ups and generally bad behavior all in the name of comedy.

No thanks. For women with sexual histories like mine, waking up in a stranger’s bed with only a vague memory of how you got there is no laughing matter. Much like Sarah Hepola, for whom “alcohol was the gasoline of all adventure,” I was a real-life trainwreck, and it wasn’t cool.

It was over eight years ago that I entered into recovery for alcoholism and sex addiction. Two years before that, when I had first entered grad school, I had been engaged. My fiancé didn’t much like the fact that I was going out after class two or three times a week and getting smashed. He wouldn’t have liked the fact that I was making out with my classmates in the bars’ bathrooms’ either, and so I just didn’t tell him. I liked to tell myself I was in an “open relationship” but it was more like “don’t ask, don’t tell.”

At this time I would have described myself as a sex-positive feminist, which in retrospect I see as one of my greatest hindrances to getting help. Sex positivity is generally understood as an attitude towards human sexuality that regards all consensual sexual activities as fundamentally healthy and pleasurable, and encourages sexual pleasure and experimentation. I mean, that’s how Wikipedia defines it, which is crazy to me, because that thinking — as any sex addict knows — is just plain wrong.

On the subject of my drunken promiscuity, I adopted the attitude of “unapologetic slut.” Anybody who had a problem with my hypersexual persona was repressive and moralistic. If you were a woman you were frigid, joyless, jealous, and a prude. If you were a dude, it was slut-shaming. You just didn’t “get it” and that was your problem.

I believed that women should be allowed to fuck who they wanted to fuck without feeling ashamed of it, and for the most part I still do — I still believe people shouldn’t be shamed for their sexual conduct. The problem: I did feel ashamed. Underneath my “who gives a fuck” exterior, I felt guilty and confused. I had no boundaries, especially when alcohol was involved.

In less than a year I had broken off my engagement. I told myself I was free and hoped it’d feel that way, but all that “freedom” meant was that my sexual conduct spiraled even further out of control. I had sex with men I neither liked nor respected. I promised myself I wouldn’t . . . then, after four or five drinks, I would conveniently change my mind. The next morning, I’d wake up feeling humiliated and remorseful.

There was nothing easy about recovery, but it helped that living the trainwreck lifestyle had stripped me of everything. Within 16 months, I was unemployed with no job prospects, barely scraping through my last semester at school. I was drinking every day. Sex with classmates had led to casual encounters which bottomed out at trading sex for cash, something I spent a whole lot of time justifying.

We keep it vague — traditions and all — but let’s just say that, for me, “recovery” has meant a combination of individual therapy, more than one 12-step program and the kind of soul-searching inventories that involve painstakingly going over one’s past and making amends for your transgressions. If you’re thinking, “Oh cool, an excuse to see that ex,” you’re wrong — in most cases, making amends means no longer speaking to all those special someones. And yes, recovery from sex addiction meant taking some time off from dating and sex.

But one of the most important things I learned in recovery is that everything that’s consensual is not necessarily healthy. “Consent is clear in Trainwreck, sometimes even enthusiastic,” writes Halima Marcus, “but to confuse non-monogamy or sexual liberation with excessive drinking is to replace desire and agency with impulse.” This was exactly what I did.

In developing a healthy sexuality, I had to stop looking at my sexual conduct solely in terms of consent. Instead, over the years, I’ve learned to view my sexual health in relation to a constellation of factors. Optimum sexual health, I’ve learned, means freedom from exploitation. For me, it means creating and maintain relationships built on honesty and trust. And yes, sexual health means protecting oneself and one’s partner from STIs and unwanted pregnancies — honestly, not something I worried about so much when I was still drinking. In other words, it’s not just about pleasure and what feels good. For me, recovery is about connecting with my feelings and communicating with my partner. It's not very exciting stuff to most people, but it was pretty exciting for me. As someone who had “done it all,” recovery gave me the opportunity to begin to discover the risks of true intimacy.

The word trainwreck — according to Marcus — is a pejorative term used “when you don’t care enough to take her problem seriously.” The movie tagline says, “We all know one.” Maybe it’s time we start taking it seriously. Maybe the trainwreck in your life is you. If so, there are ways of getting your life back on track.

If you like this article, please share it! Your clicks keep us alive!
Tags
Trainwreck
addiction
promiscuity
Amy Schumer