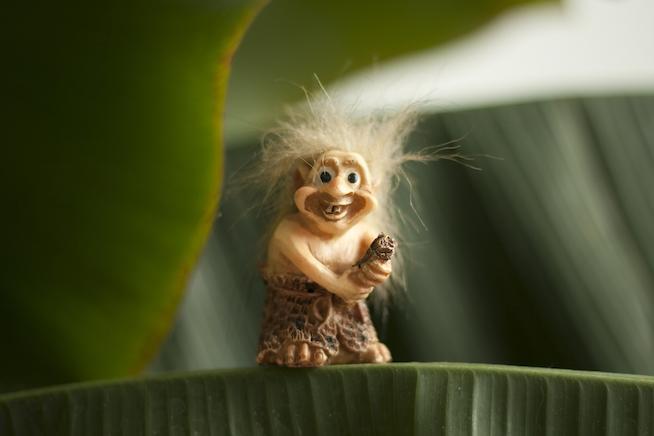 What’s funny, though (I mean, if the blatant hatred of women with opinions can ever be funny, that is), is that trolls are not only predictable, but they’re transparent as all hell. They say the same stuff over and over again, and the true meanings of the words are incredibly thinly veiled.

I actually made an entire video on this a couple of years ago, and it’s the most popular thing I’ve ever uploaded to YouTube.

Really, what they’re saying is, “You’re a woman! And so I’m going to call you any misogynistic slur I can think of because I don’t have a real argument against your point!”

2. Get Back in the Kitchen

This one has a very easy translation: “I literally have nothing more creative to say than this sentence that has been hurled at women for over 50 years. Take that, person with thoughts that I don’t agree with!”

3. Make Me a Sandwich

Sometimes this one and the previous come hand-in-hand. They belong together. Kind of like, while we're on the subject of sandwiches, peanut butter and jelly.

This one means “I’ve frequently reflected on the fact that, throughout my life, women have nurtured me. Some have even gone so far as to feed me. Perhaps to the extent that I don’t know how to survive, really, without women. But instead of being grateful, like a decent human being, I’m going to imply that your only purpose on earth is to make lazy people like me sandwiches, thereby successfully undermining the work that women in my life put into helping me grow. Because I’m totally not an asshole.”

I’m not even going to address the fact that, by its very definition, censorship can only happen at the governmental level — and that because I am but one person, I literally do not have the power to censor another person.

Instead, let’s address what’s really going on their head: “I honestly believe that I have a right to leave threatening and harassing bullshit all over your Facebook page without consequence. And I am furious that you would take that away from me.”

I think you probably need to take a foundational debating class if you think that calling me a “socialist whore” is a respectful and well-formed argument that would do me well to engage with in order to broaden my understanding of the world around me.

Translation: “I don’t have an argument. But maybe if I pretend that you’re the one without an argument, no one will notice that I have no idea what I’m talking about.”

Well, no. In case you missed the memo, I’m a feminist. That means I’m against stuff like, oh, intimate partner abuse, imperialism, and gender-based violence.

And I hear you, loud and clear.

“I cannot for the life of me differentiate between gender justice and genocide, but boy, am I angry!”

No. No. I get it. “Gender justice” and “genocide” begin with the same three letters. It’s a simple mistake.

Listen, buddy, I think that as a general rule, if the person you’re advocating for is Satan, you’re probably already in the wrong. But I’ll explain this one to you anyway.

When a troll wants to play devil’s advocate with you, what they’re really saying is: “I am in such a place of privilege that I actually believe that what I’m about to say to you is fascinating, intellectually stimulating debate and not just a regurgitation of the status quo that you’re already trying to dismantle. I am delusional.”

9. I Hope You Die/Get Raped (Alternatively, I Want to Kill/Rape You)

“Hello, my name is Troll. And I am here to prove ALL THE POINTS for you.”

And you’re a troll.

See, I can name things, too!

All this one means is, “I am staunchly in support of politics that position some human beings as more worthy of rights and resources than others. And I may not really know what socialism is, but I know that I probably hate it because it gives stuff to people who I don’t think deserve stuff.”

Listen. I know that you’re trying to cut us down and shut us up with your sharp analysis and even sharper wit, but a word of wisdom to you, trolls: You’re not so much offensive as you are boring. Come back when you have something to say that’s actually worth listening to.