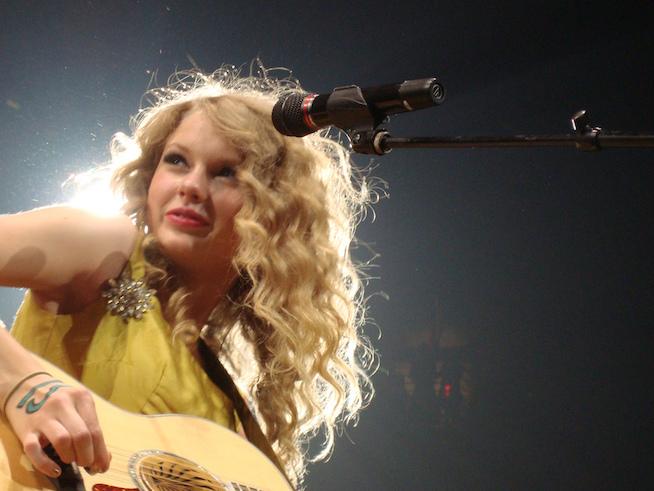 And personally, I don’t trust fellow white people when their only friends are other white people.

“I Knew You Were Trouble” is one of my favorite shower songs, I’ve cried incessantly to “All Too Well” after a breakup (and, um, every time I hear it), and I could kick your ass at “We Are Never, Ever Getting Back Together” karaoke.

By far, she’s my problematic fave.

But goddamn, is she ever problematic.

And as much as I appreciate a pop artist that I love donning the feminist label, I really hate when they do so in the name of the special brand of fucked-up anti-oppression work known as white feminism.

Now, white feminism, for those of you who may not be aware, is not a pejorative term coined to describe all feminists that happen to be white (although, by my estimation, most feminists who are white are, indeed, white feminists). Rather, white feminism refers to the practicing of a feminism that assumes white (cis, straight, able-bodied, thin, middle-to-upper class) women as the default, actively avoiding critical analysis on any axis other than gender, thereby leading to a cookie-cutter feminism that can only possibly be useful to those it’s intended for: white women.

And that’s a problem.

And as much as I’m a Swifty, I’m a feminist first (and a white one, at that), and I’m not here for any kind of feminism that would excuse, for instance, Taylor’s misunderstanding that race is irrelevant in pop culture politics (a la the feud with Nicki Minaj that never was).

So for those of you still confused about how Taylor’s version of feminism is too, um, white to be useful, here are five examples from each of the videos that she’s released in tandem with her singles off of her latest album, 1989:

Also known as: “Women of Color Sure Can Shake It”

Taylor, people may argue you’ve got nothing in your brain (that’s what people say, mmm mmm), and I would debate with them for sure. You’re smart and savvy, and you know exactly what you’re doing — which is why the world was unsurprised by both your cultural appropriation and objectification of women of color in this video.

Sure, many people have argued that, perhaps, the video isn’t appropriative or objectifying, since the scenes in question (see: break dancing in a hoodie, fitted cap, and boom box; see also: twerking in short shorts and a load of jewelry) follow the same script as the rest of the video: Taylor not quite fitting in and finding herself in awe of the (more talented) dancers who surround her.

And I get that argument. Because the same joke runs throughout the video.

The question, really, is this: Taylor, is hip-hop really yours to joke about?

And when you present an image of your squeaky clean, desexualized-by-way-of-assumed-purity self literally crawling under the asses of women of color, and then laughing off how impossible it would be for you to emulate something so sexualized by the male gaze, who’s the joke on, really, when you still reign triumphant (albeit awkwardly) by the end of the video?

Because there’s a huge difference between appreciating and exchanging culture and straight-up trying it on for size and then shedding it at the end of the day when that benefits you. The latter is appropriative, and it is always, always, always harmful.

Also known as: “Intimate Partner Violence Is Cute and Amusing in Some Contexts”

For the most part, I really enjoy “Blank Space” — both as a song and a video. While I wouldn’t go as far as to suggest that in it, she’s “the woman we’ve been waiting for,” I most definitely do appreciate Taylor’s jab at media portrayals of herself.

About the inspiration for the song, Taylor explains that “there’s been a sort of sensational fictionalization of [her] personal life,” whereby the media paints her as “a serial dater” who “can’t keep [her love interests] because she’s too emotional and she’s needy.” And when the relationship ends? “She goes to her evil lair and writes songs about it for revenge.”

High five, Taylor Swift, for joking on that bullshit. And the song is catchy as hell. Right away, it was one of my favorites on the album.

Because although we can say plenty of great things about it, there’s one huge problem: It trivializes dating violence. In fact, it kinda makes it look sexy.

The entire video, with the lyrics set against it, is a story about entrapping men in a fantasy world with lavish gifts and activities, only to keep them by means of what can only be described as abuse.

She drops his phone into a pool when she assumes that he’s cheating. She goes on a rampage — “screaming, crying, perfect storms” — where she yells at and then pushes him. She falls apart crying, taking on the “This is all your fault,” victim-blaming role. And then she threatens him with a knife not to leave, sets his clothes on fire, possibly attempts to poison him, and smashes his car.

If the tables were turned and this was a video where a man was doing this to a woman — even under the guise of a joke — no one would call it feminist or progressive.

It’s scary as all hell.

But through the lens of a feminism where only straight, white women can experience intimate partner violence, it’s cute and amusing that Taylor might enact revenge on her on-screen boyfriend — and serially. After all, the video ends with her snagging another man.

Also known as: “I Have No Idea What’s Happening in This Video, But It Makes Me Want to Go to the Beach”

OK. I admit it: At first glance, I couldn’t see anything vehemently, inherently anti-feminist about this video. And even in preparation for writing this article, I rewatched it, scrutinizing it for something obviously racist, homophobic, or ableist. But nothing jumps out at me in particular.

So I’ll take this space to state the obvious: Every love interest that Taylor has ever had — to my knowledge, both in real life and in her videos — has been a straight, cis, able-bodied, fit, middle-to-upper class, white dude.

And while it’s in Taylor’s right to be attracted to and date whomever suits her fancy, her ivory tower fantasy worlds aren’t doing much to push back against systemic oppression — which, like, is what feminists are supposed to do.

Also known as: “Squad Goals . . . If You’re Only Friends with White Women”

Look. The video has Lena Dunham in it. Need I say more?

Anyone who calls themselves a feminist after learning about the movement from, of all people, Lena Dunham, is not to be trusted. I mean, she actually had to be called out for not including any women of color in a TV show based in New York City. And I think she passed that same oversight to Tay, because I’m really not sure Taylor has any friends of color.

And if you watch the “Bad Blood” music video — which is supposed to be a miniature action movie about girl gangs — the evidence is clear.

Sure, Taylor includes both Selena Gomez and Zendaya in the video, as well as other women of color, but here’s the problem: Selena, admittedly one of Taylor’s best friends, herself has been known to perpetuate White Feminism via cultural appropriation. And while Zendaya consistently says on-point, feminist things, I’m not buying the notion that her relationship with Taylor is really that close. Their relationship feels a little, well, “this is my black friend” to me.

The issue isn’t the video in and of itself (you could argue that considering his feature, Kendrick Lamar — a black man — gets plenty of screen time to offset the blizzard of whiteness). The problem is how the video highlights one of Taylor Swift’s biggest problems as a feminist IRL: She constantly surrounds herself with beautiful, thin, rich, famous, white women.

And personally, I don’t trust fellow white people when their only friends are other white people.

And has anyone else noticed that the more Taylor gets called out for her white feminism, the more people of color are popping up as guests on her tour?

Also known as: “The Colonization of Africa Was Très Romantic”

Taylor’s latest video takes place on a 1950s-era movie set on desert plains in what is judged, based on the wildlife, to be an unnamed, overgeneralized “African” country – without a single person of color to be seen.

But there were plenty of zebras! And giraffes! And a really calm lion who just hangs out on set all day!

But as if the implication that all “Africa” (an entire continent, mind you, not a country) consists of is stunning landscape views and wildlife safaris isn’t bad enough, the video calls to mind European imperialism and the “Scramble for Africa” — but, like, romantically.

Zoé Samudzi (who is brilliant — please, please, please go follow her on Twitter) deconstructed this video perfectly as “[t]he romanticization of an era of white domination (through violent conquest [and] genocide) because of beautiful aesthestic” and “the literal use of black Africanness as a cultural aesthetic sans the employment of black bodies who created and deeply embody them.”

That is to say, the biggest problem with “Wildest Dreams” is that it isn’t. It isn’t a wild dream. It’s a direct representation of historical accuracy: the colonization of Africa, through the eyes of the colonizer.

And if you don’t think that — of all things — colonization is racist, then I fear that you’re suffering from White Feminism, too.

The video for “Wildest Dreams” perfectly demonstrates the ways in which Taylor continually misses the mark: By seeing life through only her experience (and that of those similarly sociopolitically positioned), she’s unable to notice — let alone prioritize — the needs of the most marginalized. So her feminism only helps herself.

If you like this article, please share it! Your clicks keep us alive!
Tags
taylor swift
vma
feminism