Newsflash: Not Every Dark Girl Has a Complex About Her Skin 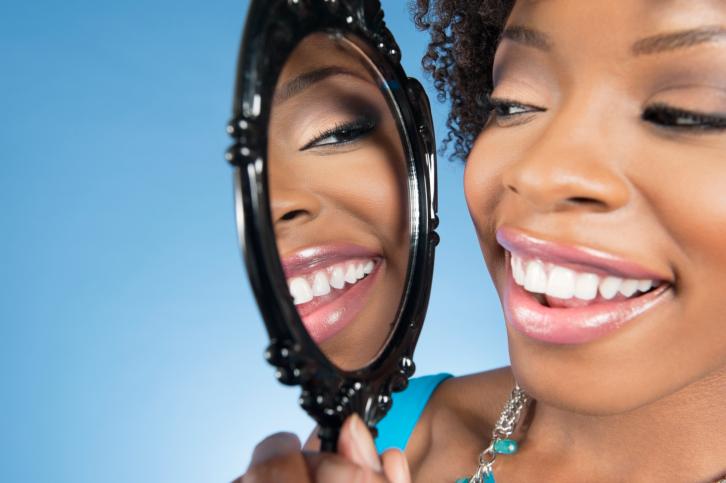 When the wicked Queen purrs, "Mirror mirror on the wall, who's the fairest of them all?" we're meant to assume she covets porcelain-skin beauty and purity of heart. And as NPR’s Camila Domonoske points out, that's a pretty messed-up supposition.

Having one word that means both beautiful and pale makes a pretty obvious statement about Western beauty standards. But the meaning of "fair" goes even further – mixing goodness in as well . . .  these aren't just linguistic quirks. They're cultural patterns.

This is hardly the only way America connects whiteness with goodness, and the impact of such cultural patterns cannot be overstated. For many, these assumptions manifest as self-loathing. Even Lupita Nyong’o—the stunning and insanely talented actress (and my dream BFF)—has talked about praying to God to wake up with a lighter complexion.

And what about those who feel just fine with the color of their skin? Surprise, surprise—they face their own issues.

Writer and Ghana native Zeba Blay has spoken candidly about her experience with her skin—not about the struggles of being dark, but about how people can’t seem to get over the fact that she doesn’t have any issues with her complexion. She describes being unable to relate to her friends who grew up being told beautiful was blonde hair and blue eyes, and the audacity some people have to challenge or contradict the comfort she feels in her skin.

. . .Often times, I can tell this is the narrative running through people's heads just by the way they talk to me. When people compliment me, it always hinges on my complexion, an overeager overstatement about how gorgeous my skin is. Once, while I was waiting in line at a Target a woman put her hand on my shoulder, squeezed, and said, “I love that skin, darling. It's beautiful. Don't you ever let anybody tell you different. You're beautiful, too!” I could only mumble a thank you, but a part of me was exasperated by people, be they strangers, friends, or acquaintances, feeling the need to reassure me that I'm beautiful, as if just because I'm dark I couldn't possibly feel anything but hideous.

Though I'm relatively light-skinned in comparison to some other brown women, I’ve confronted my own share of comments—including “You’re like a Nubian Princess!”—that have left me feeling slightly less than complimented.

Blay concludes her piece by saying:

. . . As much as I can remove myself from how the world thinks I should feel about my deep complexion, I can't remove myself from the everyday realities that come with being dark. With dating, I'm often either being exoticized or fetishized or completely ignored. I rarely see women who look like me reflected in media...Because there is a kind of validation that comes with seeing and recognizing ourselves in the media we consume.

The Unfairness of "Fairest of Them All"

Though it's been many years since Snow White brought us the evil Queen, it seems the concept of coveted "fairness" has hardly gone away—and it continues to affect women of color in many different ways.

In modern films such as The Help and The Blind Side, it's "fairest of them all" white people who save the day, like shining beacons of hope in a dark, dark world. Such depictions give the audience permission to take pity on those unfortunate enough to be born brown. But who's to say they're not the "fairest of them all," too?