Can I Be A Sports Fan And A Feminist? 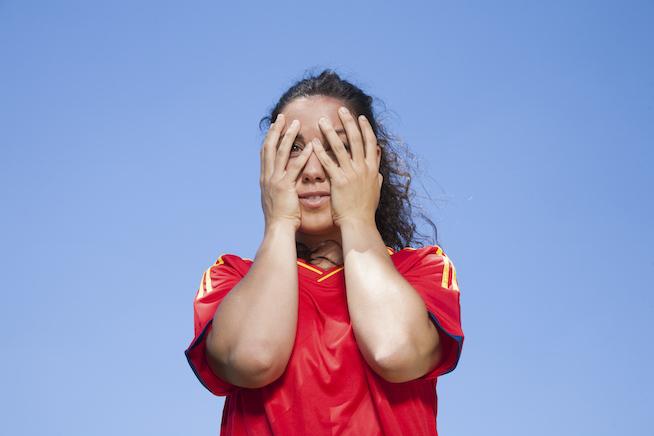 I love sports. I love watching sports. I hate how it seems like sexism is rampant in sports. How can a feminist be a sports fan?

Oh, how I know this struggle. There is no better feeling than being in a stadium with tens of thousands of your closest co-fans screaming yourself hoarse as Ohio State beats the snot out of Michigan. I don’t care that in recent years that storied rivalry has become more like a rivalry between a hydrant and a dog, with Michigan on the receiving end. It never fails to cap off my fall when my school kicks some blue butt. O-H-I-O!

Sports start out as such an equal opportunity venture. Little kids of all sizes, shapes, and genders sport jerseys from different recreational leagues. You’ve got soccer and baseball and basketball and running clubs and climbing gyms and gymnastics and swim teams and no one would dare say any kid with the heart to play should be excluded.

But by the time kids are about 10 years old, it begins changing. You get travel teams that require a lot of time and money, which not all parents can provide. You start hearing about what kids will need to do to play at certain levels years off. By 8th grade (or sooner), parents are calculating scholarship possibilities for college. The kids have been separated by gender, socioeconomics, and abilities, and the lines are not permeable.

By college, sports are an engine for money-making. Correction: The sports boys play are engines for money making. Football and men’s basketball bring in astronomical sums of media and merchandise dollars. Those dollars can help fund scholarships to the kids on non-marquee sports teams like field hockey and track, but there’s still something incredibly distressing about young men, many of them men of color, working for room and board and hope while a university endorses checks with many zeros for the their labor.

Then you get into pro sports, and let’s face it. Women are second-class citizens. Can you name a WNBA team in your state? Do you know the name of a top woman golfer? Did you know it took Venus Williams digging her heels in to get equal prize money for men and women at Wimbledon, and that didn’t happen until 2007? Venus Williams! Getting paid less than a dude! VENUS WILLIAMS!

Then there’s the horrendous behavior we forgive from athletes. Ben Roethlisberger’s rape allegations ring any bells? How about Ray Rice knocking his fiancée unconscious in an elevator? What about Adrian Peterson whipping his small son? Let me tell you, if these guys did those things to their teammates instead of to women and children, they’d be rotting in prison. But men who throw and catch balls don’t play by the same rules for life as the rest of us. Glory breeds forgiveness.

So, how can a feminist be a sports fan? The only answer I have is “Guiltily.” It’s hard to ignore all the ways that sports can be ethically problematic. But at the same time, it’s hard, in a human way, to walk away from the joy being a sports fan can bring us. The best answer I have is that we who love watching sports need to extend our love beyond the NFL and beyond March Madness, and start loving the women’s teams just as hard. Find the WNBA team in your state and learn about the players on the roster. Study the LPGA. Cheer for Venus and Serena whenever they hit the court (Not that we don’t all already do that, because they’re Venus and Serena and we love them already). Get behind women’s soccer teams. Go see field hockey and women’s ice hockey at your local college. Love the women in sports as much as you love the men, and encourage everyone you know to do the same.

If you like this article, please share it! Your clicks keep us alive!
Tags
sports
women
sexism
Venus Williams