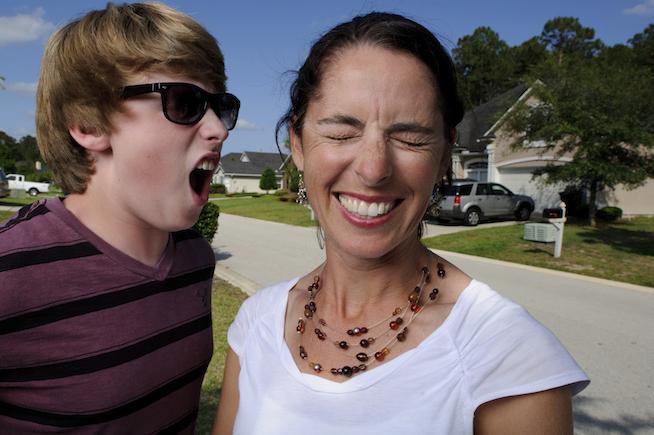 As the mother of a 12-year-old boy, I knew this day would come, the day when my sweet boy looked right at me and said, “I hate you!”

It came a lot sooner than I thought it would. The first time he said it, he was 11. The 11-year-old in me wanted to shout back, “Yeah? Well I hate you, too!” Of course, I don’t hate him, I just didn’t like him very much at that moment. I knew he didn’t hate me, either.

That’s my job, as a parent, to do my best to lead him in the right direction, even when he hates me for it. The fact that we had that exchange meant I was doing something right.

The response that came out of my mouth was different. I looked at his sweet, round, freckled face and said, “Then my work here is done,” and I exited the room. I’d like to take credit for that line, but it popped into my head at just the right moment, and I recalled instantly where I heard it. It came out of the mouth of Roseanne Barr on her show from the late '80s-mid '90s, Roseanne.

That line perfectly articulated what I was feeling.

My son was pissed that he wasn’t getting what he wanted, and I stood my ground, even when that made him feel, for that moment, the worst sort of frustration.

That’s my job, as a parent, to do my best to lead him in the right direction, even when he hates me for it. The fact that we had that exchange meant I was doing something right.

He’s officially in those awful years labeled puberty. He’s moody and impulsive, stuck between still needing his mommy and wanting nothing to do with me, because I am SO EMBARRASSING. He’s not supposed to like me all the time. And that’s OK. I know, with absolute certainty that, despite those moments of hatred, he loves me, he feels safe with me, and he knows that I’m in charge.

As parents, we’ve all been guilty, at one time or another, of trying to win a popularity contest with our kids. Why? Because there’s nothing better than your kid wrapping their arms around you, giving you that SO EMBARRASSING hug, a blatant display of public affection, and letting you know how happy you’ve just made them with that donut, that later bedtime, or that video game. In those moments, we are BFFs, and it feels good.

But we aren’t BFFs, and we shouldn’t be.

We should be parents, and sometimes (or usually), being a parent is a thankless, sucky job. We set boundaries that we hated when we were their age, too. (Have I convinced you to have that baby yet?)

Despite what a drag it can be to “be the boss” of someone small and angry, it is also, without  a doubt, the most fulfilling job I have ever had. Shortly after I exited my son’s room, he came and found me. He stood in my bedroom door way, face still red and wet from emotion, and said, “You stole that.”

Innocently, I looked up and replied, “Stole?”

“You got that from Roseanne!”

We looked at each other, each cocking our heads to the side, unable to contain ourselves any longer, and burst into laughter. He came and sat next to me on the bed.

“I knew I heard that somewhere before!”

He asked if we could watch that episode and we did. The hatred had passed. I had been the one to turn him on to my favorite shows I grew up on, which is why he knows more about Seinfeld, Roseanne, and Beverly Hills, 90210 than he probably should. And you know...I love that.

I’m 100% sure that he will “hate me” many more times, and I may not always throw out the perfect comeback, but I’ll know in my heart that it’s OK, I don’t have to say anything, and I’m doing my job.

For future reference, Roseanne is rife with parenting advice. I never realized it until watching it again as an adult and a parent — but that’s a discussion for another day. And in case you were wondering, you can hear that line in action on Roseanne, Season 4, Episode 24: “Don’t Make Me Over.”

If you like this article, please share it! Your clicks keep us alive!
Tags
parenting
parenting advice
things kids say