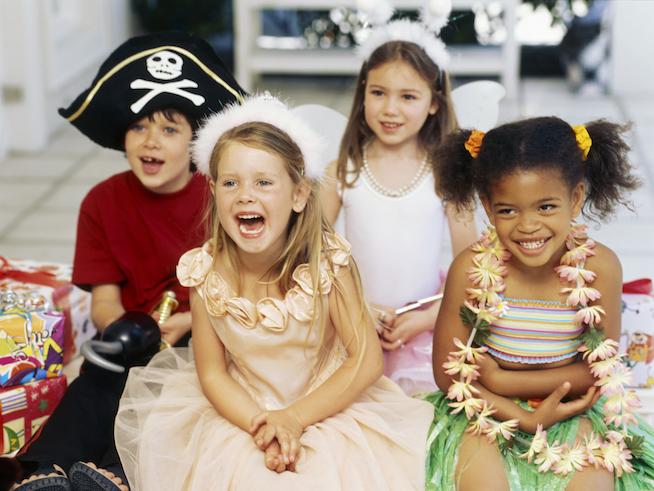 Can we all just agree that tiaras are great, no matter who's wearing them?

Friday afternoon, I stood in the cool October drizzle and watched the kids' Halloween costume parade at my daughters' elementary school. As I watched them go by, in a sea of polyester, tulle, and sequins, I noticed a surprising trend: a large number of girls were dressed up as boys.

There were girls dressed up as Harry Potter, Yoda, Darth Vader, and an NFL football player, just to name a few, and for a moment I was filled with pride over just how many girls had disregarded gender roles when choosing their costumes. But then an unpleasant truth crept into my self-congratulatory moment — not a single boy was dressed up as a female character.

As I watched the kids go by, I searched in vain for a boy dressed up as a strong female character. I watched them walk by wearing Star Wars, ninja, hot dog, and even whoopie cushion costumes, but no matter how much I searched, there wasn't even one boy wearing a female costume. And that's when it hit me: it's OK for girls to aspire to be like boys, but it's categorically not OK for boys to aspire to be like girls.

Earlier in the day, I spotted a preschool class going on a walk in full costumed glory. Amongst the princesses and firefighters was one little boy dressed as a turtle with a twist: This ninja turtle was wearing a princess crown. At age 2 or 3, he hasn't learned yet that princesses are for girls. He still wanted a sequined purple crown because it was beautiful, and so he became a princess ninja turtle. But in a few short years he will enter elementary school and learn his role as a boy, and he probably won't wear a crown anymore. He'll become another boy in an appropriately male costume in a blur of other boys and girls dressing up like men.

There's nothing equal about raising a generation of children to believe that it is only men who are worth aspiring to. There can be no equality when the idea of dressing up as Harriet Tubman, Hillary Clinton, or Joy from Inside Out is laughable to our sons. Sure, maybe a few boys will dress up as princesses or women as a joke, but that's precisely the problem — the idea that aspiring to be like a woman is unimaginable to our sons.

If my daughter can be Iron Man, my son should be able to be Wonder Woman. But he, like his friends, would simply never consider dressing up like a female. And that is why we know that we have an incredibly long path left to travel. We've made progress, yes, and that shouldn't be discounted, but we are categorically not finished here. Our sons accept us, but they don't aspire to be us. And until they aspire to be us, we will know that there is still a part of them, however small, that doesn't respect us — not because we aren't worthy of respect, but because being a woman is still considered the lesser.

Rome wasn't built in a day, and I recognize that progress doesn't happen overnight, either. But sometimes the simplest things are the most meaningful, and when not one little boy wants to be like a woman on Halloween, we need to listen to what our sons are telling us. They may accept us, but they don't want to be us. And until we change that unsettling truth, we will simply never be equal.

If you like this article, please share it! Your clicks keep us alive!
Tags
Halloween
costume
gender inequality