What Does That Mean? A Gender And Sexuality Glossary 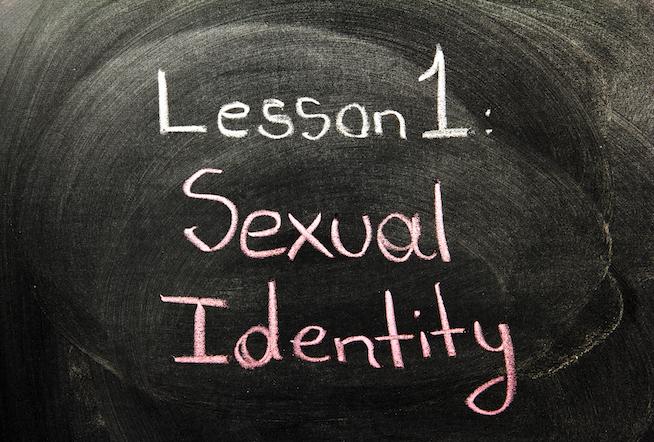 What’s the difference between being pansexual and binary? Genderqueer and regular queer? And what’s a graysexual panromantic trans man? Confused? Me, too.

Sometimes I feel like I need a scorecard to keep track. So I went ahead and made one. No value judgment, just trying to get a handle on it. Facebook currently has 50+ gender choices…and counting. I’ll explore a bunch here, in alphabetical order:

Agender: A person who views themselves outside the social constructs of gender — they don’t identify as male or female, but genderless. Neither a boy nor a girl. Also called gender-neutral. There’s even a flag. (Lots of them have pretty cool flags.)

Androgynous: Having both a masculine and feminine gender identity, like in the same-named Replacements song. Similar to agender (above) but not exactly. Not to be confused with intersex, which is a person born with both male and female sex organs.

Aromantic: Someone who has little or no romantic feelings for anyone. But sex…that’s a different ballgame. Not to be confused with asexual (below). There’s also a flag and a club — National Coalition for Aromantic Visibility.

Asexual: A person without sexual feelings or desires.

Binary or Binarism: Classifies sex and gender into two distinct, opposite, and disconnected forms of masculine and feminine.

Bisexual: A person capable of having physical, romantic, and sexual attraction toward both sexes.

Cisgender: The mirror opposite of transgender, this is where the gender you identify with matches the one you were assigned at birth.

Cross-dresser: Not a gender issue, but included here because it’s often confused with transgender (above). A cross-dresser wears the wardrobe of the opposite sex but has all the “hardware” they were born with. As GLAAD writes, "Cross-dressers do not wish to permanently change their sex or live full-time as women"...so don't mix it up with transgender or transsexual. Note: "cross-dresser" is the more modern term, but some prefer "transvestite." Ask first.

Demigirl: Someone who only partially (but not wholly, hence the demi) identifies as a girl, a woman, or otherwise feminine, whatever their assigned gender at birth. I.e. they feel sort of like a girl, but not totally. Not to be confused with demisexual (below).

Demiguy: (aka demiboy, demiman, or demimale person) A gender identity describing someone who kind of identifies as a man, boy, or otherwise masculine person, whatever their assigned gender at birth. It can also describe someone born genetically male who feels disconnected to being a male.

Demisexual: Just like a demitasse is a small cup of coffee, a demisexual is a person with “demi,” or little, sexual desire or attraction. Desires are usually only triggered when they become deeply emotionally or romantically connected.

Gay: Circa 1930, it meant happy. Today, it means a homosexual person: your garden variety guy-who-likes-guys or girl-who-likes-girls (lesbian), but generally is not any of the combos described here.

Genderfluid: Having a gender that varies. You might wake up one day and feel more butch and wake up another and feel more femme. And it’s all good.

Genderqueer: Neither a dude nor a lady or a "dude looks like a lady" — a person with identity outside the traditional gender binaries who can identify with both, neither, or a combo platter of male and female genders.

Graysexual: Someone with limited sexual desire, who "falls into the gray area" of sexuality.

Intersectionality: The belief that gender, race, class, and sexual orientation can’t be separated from each other.

Neutrois: Think of it as je ne sais quoi: literally, “I don’t know what,” or “that certain something” which is as unnameable as you are. The cousin of agender or gender neutral.

Nonbinary: Aka xenogender, describes any gender identity that doesn’t fit into the traditional male or female gender specification.

Panromantic: Offers the possibility of being romantically interested in anyone of any gender or orientation, but not necessarily in a sexual way. E.g. “I’m a panromantic lesbian.”

Queer: Originally a slur for gay, but now experiencing a renaissance. It’s being reclaimed by some gay men, lesbians, bisexuals, and transgender persons as a self-affirming umbrella term. Caution: still extremely offensive when used as a put-down.

Transgender: Some purists consider this tag as being more resonant with binary trans people, while others who tread a linear path from female to male (or vice versa) consider this label too constricting. Sometimes shortened to trans. Warning: the nickname "tranny" is considered offensive by most.

Trans man: NOT a man who fixes car transmissions. Instead, it’s a transgender person who was assigned female at birth but who identifies with being a man. Aka transmasculine.

Transnonbinary: Someone who is both transgender (see above) and nonbinary (identifies as neither a man or a woman). Sounds contradictory, but it’s not. Or is it?

Transsexual: Individuals who have undergone and completed sex reassignment surgery (SRS), but can also refer to people who have not yet undergone SRS, and whose anatomical sex doesn’t match their psychological sense of personal gender identity. Considered outdated and derogatory by many, so ask before you use it. Also be sure not to use in place of "transgender" — they're not the same thing.

Transsexed: Refers only to those who have undergone SRS.

Trisexual: Someone who will try anything at least once. Twice if they like it.

Want to know more? Check out Judith Butler’s seminal Gender Trouble, which many consider the go-to gender theory book. Social media is also great for the most up-and-coming labels: Trans Jewry…Queer Muslims…Queers with Disabilities. We got that, too. Just leave your pronouns — and your judgment — at the door.

And GLAAD is a great resource!

If you like this article, please share it! Your clicks keep us alive!
Tags
genderqueer
Transgender
teminology