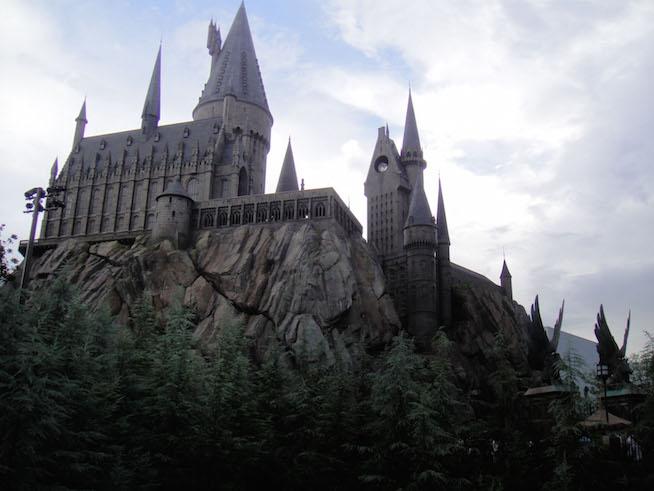 These books have made me so suspicious. Image: Warner Brothers.

I finished Harry Potter and the Order of the Phoenix and started The Half-Blood Prince, like, a long time ago.

Even though I wasn’t thrilled with OOTP in the beginning, and everyone told me it was the most boring and unnecessary one in the series, it was the book I ended up enjoying the most. Well, “enjoying” is a weird word for my relationship with it — it is the one, so far, that has made me feel the most.

I had some pretty strong emotional attachments to the last book, so it was with a bit of a heavy heart I moved on to Half-Blood Prince.

This month has been unexpectedly busy. Boyfriend and I have this wacky idea to get married before the end of the year, so now we’re neck-deep in wedding planning. In order to be able to afford this shindig, I've been taking pretty much any assignment anyone will throw at me — so I haven’t really had a chance to sink my teeth into HBP (until last night, when I was up late because...well, you’ll see why.)

So I’ve been leaving myself Post-It notes in the book as I go to remind myself of my reactions to the story so far.

Below are 20 different thoughts I had while reading the first 250 pages of Harry Potter and the Half-Blood Prince:

I have a feeling this is significant.

I can’t see any other purpose for them other than sneaking around and general up-to-no-goodness.

The staff is aware of their existence — why haven’t they outlawed them? Do they just think it’s probably futile to try and stop teenagers from their mischief-making?

Yes, I know they were played by a veritable Britpop supergroup in the movie. But I’m curious how they sounded in J.K.’s imagination.

Hey, I wonder if they have traveling Weird Sisters at Wizarding World like the wandering musicians at Disneyland...

4. OK, how do these Auror escorts in the middle of King’s Cross NOT look at least a little suspicious?

Are they banking on Muggles to keep up a ‘big city, weird stuff happens’ mentality? Wouldn’t suited men leading teens by the arm through an international train station look a little bit abduction-y? What’s to prevent someone from hailing a cop to question them? Am I thinking too much about this? (Editor: Yes, but that's why we love you)

5. I maybe just teared up a little bit because I love Mrs. Weasley so much.

Her jogging alongside the train to say goodbye? What a sweet, sweet soul.

6. Can wizards be homeschooled?

7. Luna is concerned about The Quibbler’s circulation?

Every so often, I’m reminded of how old these books are starting to get.

8. “I enjoyed the meetings, too,” said Luna serenely. “It was like having friends.”

9. I want to know more about Neville.

I’ve always had a soft spot for Neville. I wonder if he turns out to be the hero of the series?

Kind of happy he’s finally made that Defense Against the Dark Arts post he was after, even if it was kind of by default.

How can he get away with talking to students like that?

Then again, some teachers are jerks, providing no one speaks up. I’ve had plenty of those.

12. I’m still so amazed at how much time these teachers spend with and on students.

Aside from the occasional Stand and Deliver type, where I come from, teachers mostly go to work and go home.

Sure, they care about their students, but they don’t just let them come hang out at their hut in the woods for a spot of tea in the evenings.

There are so many great cocktail names in this series. Veritaserum, Dementor’s Kiss...

All I know is that Veritaserum would make you a bit chatty after a while and Dementor’s Kiss would mess you up real good.

14. Slughorn is so nice that I don’t trust him.

These books have made me so suspicious.

15. The Half-Blood Prince is Snape.

Putting in my bet now.

16. I wouldn’t do well in Potions either.

I can barely improvise a recipe when I forget an ingredient.

17. Why is it people are said to turn green when ill?

19. The book is still in its ‘peaceful bliss’ phase.

I’m honestly surprised Harry has not figured out that he needs to prepare himself for year-end disasters. There’s a pretty clear pattern of shit going straight to hell around mid-February.

Why isn’t he mentally preparing himself?

I guess that’s what these meetings with Dumbledore are, though.

20. Know what I like? Harry and Ron don’t accuse Hermione of being “no fun” just 'cause she’s studious.

I mean, they do, but they accept it as part of her personality, not a flaw.

They don’t try to change her.

(*I awoke the next morning to find I had written the Post-It exactly like that.)

21a. WHAT IF HARRY’S DAD WAS SOMEHOW VOLDEMORT?

Get me my tinfoil hat, I think I am onto something here

21b. This note brought to you by too much coffee too close to bedtime.

22. “Oh, and Malfoy knows, of course,” said Harry to Ron and Hermione…

...Who continued their new policy of pretending not to hear it whenever Harry mentioned his Malfoy-Is-a-Death-Eater theory.

Seems I’m not the only one concocting crackpot theories. If you need us, Harry and I will be in the Hog’s Head discussing the best ways to duck government surveillance.

Least Favorite Character: Like I said up top, I just don’t trust Slughorn. At all.

Quote: “Neville’s childhood had been blighted by Voldemort’s just as much as Harry’s had, but Neville had no idea how close he had come to having Harry’s destiny. The prophecy could have referred to either of them, yet, for his own inscrutable reasons, Voldemort had chosen to believe that Harry was the one meant.

“Had Voldemort chosen Neville, it would be Neville sitting opposite Harry bearing the lightning-shaped scar and the weight of the prophecy….Or would it? Would Neville’s mother have died to save him, as Lily had died for Harry? Surely she would...But what if she had been unable to stand between her son and Voldemort? Would there then have been no “Chose One” at all? An empty seat where Neville now sat and a scarless Harry who would have been kissed good-bye by his own mother, not Ron’s?”

If you like this article, please share it! Your clicks keep us alive!
Tags
Harry Potter
Harry Potter and the Half-Blood Prince
Books
reading
AGAWRHP