Why Do We Keep Telling Women Not To Feed The Trolls? 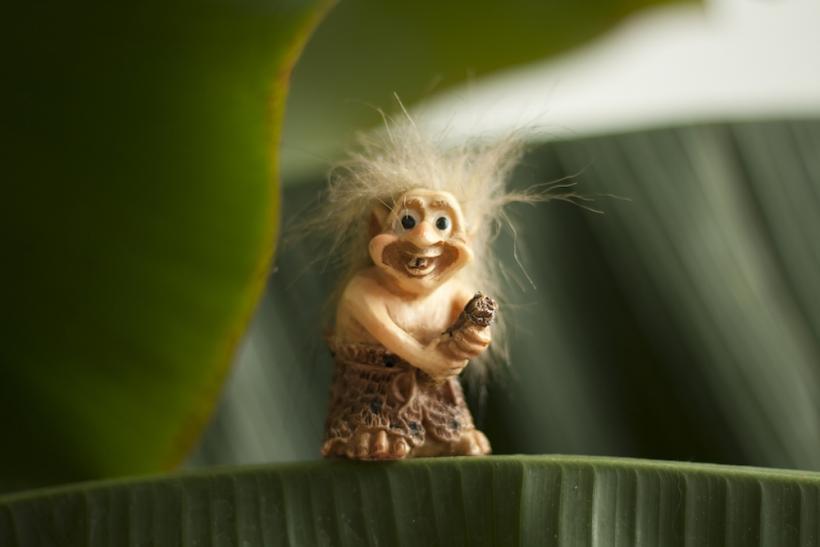 OK, but WHAT IS HE HOLDING IN HIS HANDS

A few Fridays ago, I met my first troll.

His name was chad.ass (I know, right?), and he found me on Instagram. I had posted a selfie with a caption detailing a somewhat misogynistic and upsetting incident I'd had at the gym that morning, and boldly tagged it "#feminism," which is how I'm assuming chad.ass found me.

He had one photo posted and only 9 followers (which went down to 7 over the course of this whole ordeal — I wonder why). His first comment read as such:

"First of all, you should not have been near a man's machine, or near a gym at all. Your purpose in life is to please men and to stay at home away from the heavy weights that could hurt your fragile body. Stick to cooking and cleaning and pleasing men sexually or you will not find a man to provide for your pathetic self."

It read like a joke. Like, he almost literally told me to go make him a sandwich. Was I insulted? Yes, but hardly. His attempt to belittle me was laughable.

I have lived pretty much my whole online life fleeing internet conflict. Aside from a few recent flame wars on Facebook (Trump has made that reeeeaaall easy), I generally avoid confrontation. Sometimes, just watching a feud play out in my newsfeed is enough to fill me with panic.

I don’t know what changed in me this time, but I decided to engage chad.ass. I know I'm not supposed to, but come on. He'd made it so easy to shut him down.

Minutes later, he came back with an explicit threat of violence against me.

Then my husband got involved. Then all my friends. I kept responding — not with more vitriol, but with humor. Eventually I felt I had said my piece, so I bowed out, politely asking him not to threaten physical violence toward any more women. He posted a few more baiting remarks after that, but I just watched them scroll up my notifications bar, and that was that.

While this was all happening, I posted about it on Facebook — I have to admit, I was kind of proud of myself for attracting a troll. Considering all the work I’ve done at Ravishly and elsewhere, I was shocked that it took this long to provoke the ire of an insecure fratboy. I posted a screenshot of chad.ass’ exploits along with a semi-jokey caption.

And then, a REALLY interesting thing happened...

People started chastising me for "feeding the troll."

And I started to feel like I should apologize to other people for the simple act of standing up for myself.

Let’s talk about this.

In the immediate aftermath of my stern talking-to, I found myself feeling embarrassed, ashamed, and like I had once again said too much on social media. And shortly after that, I felt silly for feeling like I had said too much. I spend a lot of my time asserting, in print and in person, that women should never have to defend themselves for speaking their minds, and here I was being told to do exactly that. I started to wonder why these people felt free to tell me when I could and couldn’t say my piece.

I couldn't understand why some of my otherwise 'enlightened' friends were suddenly telling me, in essence, not to cause a scene — even when a strange man was telling me in no uncertain terms how he would like to "knock you out so quick your (sic) head would hit the ground before your feet would."

I know they meant well, but their reactions sounded like the same unsolicited advice women have been administered for centuries: sit down, shut up, and don't draw attention to yourself.

I’m not saying talking back to trolls is the solution to the problem, but I am saying if someone wants to speak up, it’s their prerogative.

Telling a person not to engage with an online bully isn’t an inherently misogynistic thing to suggest; advising someone not to indulge an obviously hostile person is generally good advice.

I’d argue, however, that being the target of online abuse is an overwhelmingly gendered experience — if you for some reason need stats on that, you can find them here, here, and here.

I couldn’t help but assume the reason these people were telling me not to say even a word to this troll was because women aren’t supposed to fight back. We’re supposed to rise above — to “not stoop to their level,” as my mom used to say. To suffer in silence, to work twice as hard as men, to be nonplussed by the harassment we receive for those efforts.

My critics' main argument seemed to be that chad.ass was so obviously trying to get a rise out of me. I do agree there — the first comment seemed explicitly designed to offend. But...so? Why does that mean I should just ignore it? Do they really expect me to take abuse just because he's not a "good" troll?

I’m not saying talking back to trolls is the solution to the problem, but I am saying if someone wants to speak up, it’s their prerogative. It’s none of your damn business how a woman handles her shit, a rule that applies to most situations in life.

Does this mean I plan on picking fights with every troll that comes my way? God, no. I don’t have time for that. And I’m certainly not suggesting everyone do the same. I’m rarely ever this bold, and I don’t expect anyone else to be so confrontational all the time. I mean, jeez, can you imagine how tiring that would be?

But if someone wants to come back at a troll, how is it my place to tell them not to? In the future, I’ll probably just go back to rolling my eyes at unimaginative and hateful tweets (don’t think I didn’t see you, everyone who DMed me about my last Worst Feminist Ever column). But if I encounter any more that I feel warrant a response, I’m not just going to sit quietly and let them walk all over me.

This very article will no doubt stoke legions of basement-dwellers to test my limits on Twitter, but I’ll cross that bridge when I get to it.

Chad.ass’s account disappeared before the clock struck midnight — my friend reported him for the violent comment, which I suspect had something to do with it. I gotta say, I kind of miss him. Take care, chad.ass. I hope you find the peace you seek.

If you like this article, please share it! Your clicks keep us alive!
Tags
harassment
online harassment
trolls
feminism
sexism
social media