My Labor And Birth Didn't Go As Planned — And No, I'm Not 'Over' It 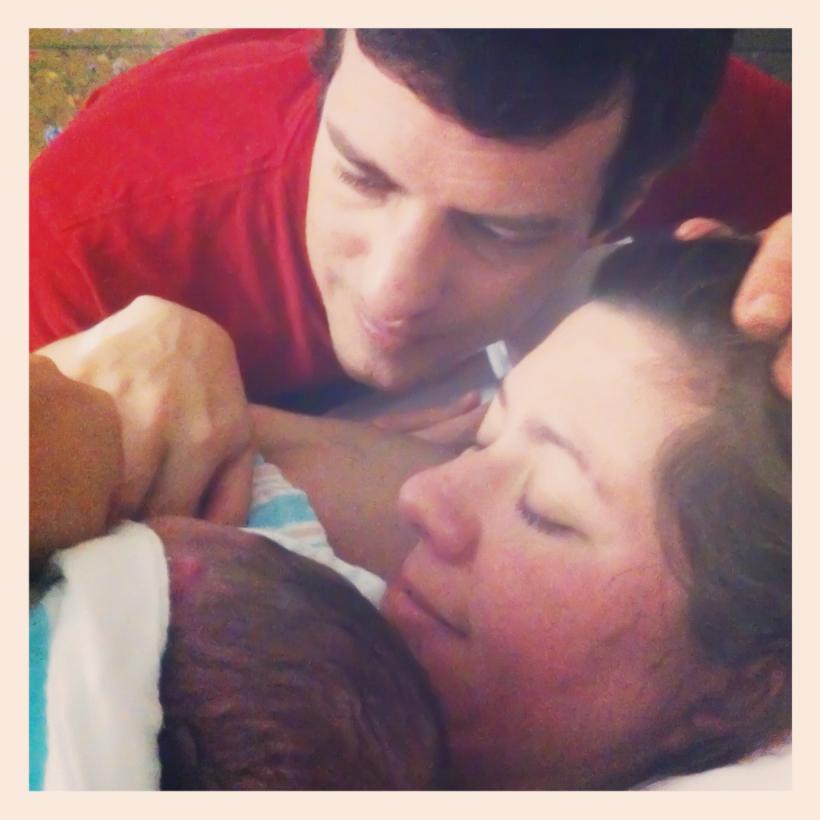 His birth was supposed to be peaceful, swimming into the world in our kitchen, surrounded by his family, welcomed with cake and champagne. Image: supplied.

I don’t have to be thankful just because things didn’t end tragically.

My youngest son just turned 4. He’s a fiery spitball of a kid, smart as a whip, sweet as can be, and (sometimes) a real pest.

My pregnancy with him was miserable. And I don’t mean Oh, I am really irritated that my ankles are swollen/my back hurts/I’m nauseated miserable.

I mean my pelvis was literally coming apart.

At one point, I was crawling around my house picking up toys. When you're a prisoner of the sofa, you do what you have to do — or something.

He was due March 24th, which meant I was going to either plant the garden on my hands and knees, or with a baby on my back. I had contractions every day beginning at 14 weeks, because my uterus is like a cranky toddler.

The last week of my pregnancy was essentially one really prolonged labor. Consistent contractions every 8-10 minutes, unrelenting, sometimes moving close enough together to look like labor, most of the time just being a complete annoyance.

On the 26th of March, in the middle of a night of relentless contractions, my water broke.

It wasn’t Niagara Falls or anything, but it was just enough to make me change clothes and sheets. I’d been having contractions for an eternity already, so the post-membrane rupture contractions were nothing new.

I woke up Matt, told him I wet the bed, asked him to fill the birthing pool in the kitchen. I called my midwife — a 70-year-old gift to women, who wears her waist-length gray hair in a tight bun. She asked if things seemed to be moving quick; I said no, same old shit, just with fluid everywhere. She promised to arrive in the early morning hours.

Things still hadn’t changed much approaching the 24-hour mark since my water had broken.

Nothing was really changing.

We let things putt along until the early afternoon, when my midwife suggested I take some black and blue cohosh tinctures (yes, they are as foul as they sound). I used my pump and nursed my 17-month-old to coax contractions (yes, I am that hippie), and the midwife went to Costco. I guess maybe she needed 50 rolls of paper towels or something.

Suddenly, there were a lot of people around. They’d been there all along, I guess, but the room shrank as my contractions strengthened and my pain increased.

Afternoon became evening and the birthing pool was surrounded by people eating the chicken noodle soup I had made and frozen a few weeks earlier.

But now some blood. More water. More blood. More contractions. And a baby whose head was just content to hang out way above my pelvis — it’s hard to come out if you won’t even come down.

I do not want to hear, “Well, you’re lucky he’s healthy".

Evening turned into night and Matt put Ella to bed, while the house buzzed with the chatter of a half-dozen people (including a guest midwife, who did yoga on my floor and kept talking about her broken car, and not including my already-buzzing immediate family).

Things still hadn’t changed much approaching the 24-hour mark since my water had broken. I was stuck at 7-8 cm, with my baby hanging high, so exhausted. I was also getting nervous, which wasn't helped by the profound case of PTSD that a previous shoulder dystocia had so generously left me.

Matt and I took a shower. He rubbed my back while I did some kind of whale-sounding thing through contractions. We laid on our bed and slept off and on for about 45 minutes, taking time to think about what was going on and what our next move was.

My contractions began to slow, my uterus no doubt exhausted from weeks of trying to get this kid out.

When we woke up we looked at each other from our pillows and, made the unspoken but no less agonizing decision to leave our home, our warm pool, our food, and our comfort — our family — behind and head to the hospital.

This is the point in the story where people will say things like Oh, thank GOD you transferred, or Well, all you wanted was a healthy baby, right?

I was lucky that my body responded to the small amount of pitocin I needed to convince my uterus that it was supposed to be getting a baby out. I sobbed anyway.

I was lucky I didn’t have a c-section. I was lucky he was born, healthy and huge at 10+ pounds, from just two hefty pushes.

This was not what I had planned.

I do not want to hear, “Well, you’re lucky he’s healthy."

Is my loss comparable to the death of a child? No. But it is loss.

Yes, he’s healthy. He’s 4 years old. He barely sleeps, never shuts his mouth, knows things like how a car exhaust system works. He’s got his dad’s stunning blue eyes and curly, almost-blonde hair (whose origins I can't figure out). He can ride his bike without training wheels, cries if we make him eat broccoli before he can have a cookie, likes to listen to Mozart (specifically Nachtmusik) at bedtime.

That doesn’t devalue my sadness.

Is my loss comparable to the death of a child? No. But it is loss.

After his arrival, I watched friends give birth, peacefully, at home, and I sobbed.

I don’t have to feign gratitude, because I lost something that was important to me. I don’t have to pretend that I’m lucky he’s healthy, because his health and my lack of an abdominal scar don’t mean I’ve forgotten laboring in a dingy hospital room.

I don’t have to be thankful just because things didn’t end tragically.

I’m allowed to grieve what I lost, even now, because it was important to me — and I lost it.

If you like this article, please share it! Your clicks keep us alive!
Tags
homebirth
transfer
dystocia
hospital
grieving
birth
doula
midwife
labor