The Shower, PTSD, And My Traumatic Labor 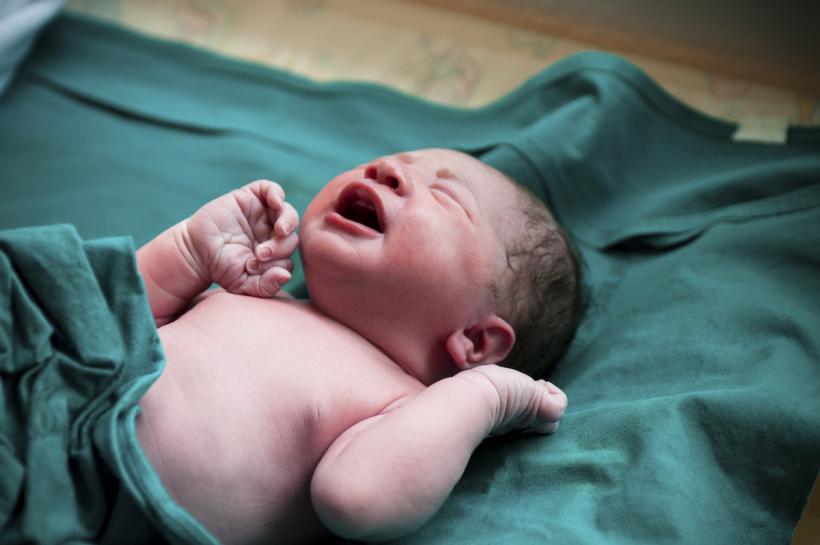 The baby is on the outside. Image: Thinkstock.

The baby, a soft, squishy newborn, was asleep in the very center of our huge bed. My wife was sitting near him, either checking Facebook or watching him breathe, depending on her mood. I went into the master bath to take a shower.

We had really lucked out. The house we were renting happened to have one of the most beautiful showers I had ever seen. It was huge and open, the water pressure was perfect, and the floor and walls were made of stone tiles. It felt like taking a shower in a magical woodland realm.

And it was beginning to drive me totally out of my mind.

I told myself not to be such a wuss — it was just a damn shower. I told myself I would be OK, that I could hold it together this time.

But as soon as the water hit my back, everything was different. Something snapped inside me and I was transported backwards in time.

I felt my arms start to tremble despite the warm water; I felt the familiar panic sink in around me, palpable on the foggy air.

I kept trying to tell myself it was OK.

“The baby is in the next room,” I whispered to myself.

But then my stomach tightened. I was sure I could feel the contractions, and any second, they would bring me to my knees. Feebly, I reached down to find my c-section incision, but it didn’t matter. I started to cry.

In that moment, I knew only one truth: I was in labor, I had always been in labor, and I was going to be in labor for the rest of my life. And, eventually, labor was going to fucking kill me.

I called for my wife.

What I experienced that day (and many others) is called a flashback. I had heard of flashbacks before, and I had been told that it sounded very much like I was having a post-traumatic stress response to the hard labor I had endured.

Even so, it took weeks of having the same experience every time I took a shower — and my wife gently pointing it out to me — for me to realize what exactly was happening to me. In my family, recognizing mental illness is not something we like to do.

I kind of felt like I could just bluff my way through it. Like if I gave myself a big enough pep talk, it wouldn’t happen, and I wouldn’t feel like I was in labor all over again. Instead, I put off showering for as long as I could, which wasn’t actually very long, because I was supposed to clean out my C-section incision in the shower “every day or so.”

So every two days, I would stand there, smelling that particular smell of the hot water hitting the stone, feeling trapped, and trying to convince myself that I couldn’t possibly be in labor, because I knew where my baby was.

That shower: I was obsessed with it towards the end of my pregnancy. It even had a little bench where you could sit down and take a breather if you needed to, a luxury that seemed ridiculously decadent until I was an exhausted pregnant woman.

I felt like crap all the time, but we were also excitedly planning for our home birth. Everyone told me there was no reason to believe that my birth wouldn’t go well. For a first-timer, I felt surprisingly confident.

And then, in the wee hours of a Monday morning, I went into labor.

Which could be the start to a cute birth story, the kind of cute birth story that I loved to read before I was a mom, except that my son was not born on Monday. He wasn’t born on Tuesday, or Wednesday, or Thursday either.

He was born via Caesarean section on the following Sunday evening.

The time in-between — starting from when the midwife told me I was really in labor, through two trips to the hospital, endless filling and refilling of birth pools, and a big fucking needle finally sinking into my spine — was the most intense struggle I have endured in my life.

And a lot of it happened in the shower.

The shower was my safe space. The shower helped me relax and center myself, and relaxing helped the contractions to come on with more force. The force was supposed to bring the baby down, so I could eventually birth him in our big bed.

In the shower, my wife held my hands and told me I was doing just fine. I made noises like a strange woodland animal. The hot water pelted my back and my shoulder blades. The baby wiggled and kicked inside me.

And after my water (finally) broke, the shower was the one place I didn’t feel gross about the fact that I was constantly leaking amniotic fluid everywhere.

Living with PTSD is still hard for me; I’m still trying to figure out how to be after the trauma I’ve experienced

I cried and raged. I labored and breathed deeply. I stood under the flow of water until our (very good) hot water heater finally gave out and the water ran cold. And then, a crowd of helpful hands helped my exhausted, still-pregnant body out of the bathroom and back into the birth room.

Parts of the labor were magical and beautiful, parts of it were exactly what I had wanted. But there was just too much of it, and at a certain point, it started to get uglier and uglier. My brain became a dark and confusing place, and by Saturday night, I was certain of it.

I am going to be in labor forever. There is nothing else.

When the sobbing started, when I couldn’t hold it together anymore, when I would start to really believe that I might actually be in labor again, I would call for my wife. She would stand next to the shower or sit on the toilet and try to talk me down.

The trouble was, that felt exactly the same as labor too. It only served to further convince my confused brain that Yes, this is it! It is happening again and it is never, ever, going to stop happening.

Similarly, trying to breathe deeply and stay calm had the exact opposite effect as intended, pushing me deeper into the spiral of unreality in which I was caught.

After weeks of this, we settled on my wife standing casually in the bathroom, trying to convey an air of oh nothing very big or important is going on and making jokes or casual comments. She would tell me funny things she saw online, talk about friends of ours, anything.

This didn’t really help, but it didn’t make it worse either. When I would finally break down, she would remind me where the baby was.

I want this to end with a tale of redemption, of me facing my shower-related fears and getting the help I needed and becoming stronger for all of it.

The truth is, though, we just moved.

Not having that very distinctive shower anymore didn’t totally stop the labor flashbacks, but it did make them a lot less frequent. Without the setting being identical, they also felt a lot less real, and my triggers were a lot easier to identify individually.

Living with PTSD is still hard for me; I’m still trying to figure out how to be after the trauma I’ve experienced (and it’s more than one article can get into, truth be told).

As the anniversary of my labor creeps up, I am only struck with the fact that I have survived. I survived a whole year. I am not in labor anymore.

The baby is on the outside.