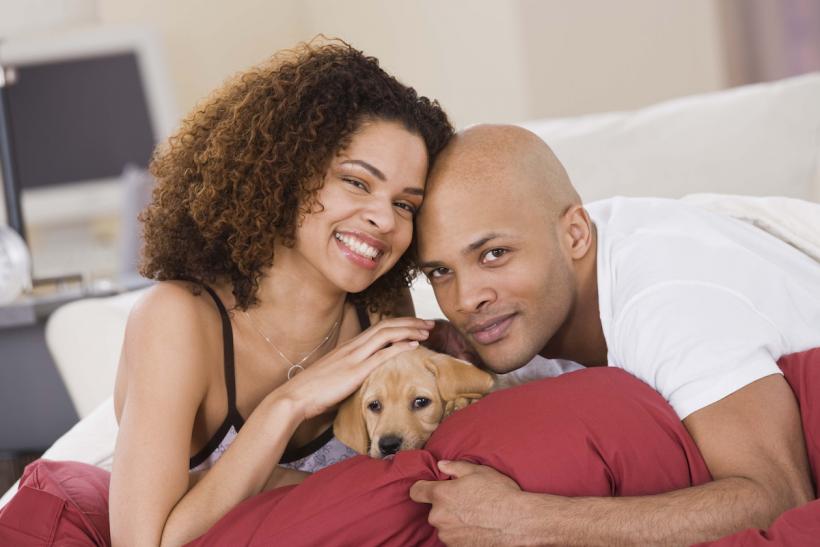 Seriously, stop saying these sorts of things to people who can get pregnant, even if you are one yourself. Image: Thinkstock.

“You’ve already had a puppy — you can deal with a baby!”

As my 30th birthday draws increasingly closer (so. close.), questions about babies are also increasing — from my mom, other family, friends, strangers… Oh, and did I mention my mom’s curious, too?

While some couples choose not to have kids, my husband and I definitely plan to; that’s why we recently bought a house.

We’re going on four years of marriage, and it seems that once you’re married, people are surprised if you don’t pop out a baby nine months after the honeymoon.

Sure, other women did and that’s just fine. That’s just not my choice — mainly because my husband and I have lived in four states in four years, and I can’t imagine how difficult those moves would’ve been with a kid.

We all make our own choices, and we deserve to make them without judgment.

There are so many reasons someone might not have kids. Whether they decided to never have kids, are having difficulties getting pregnant, or just don’t want kids right now, it’s really not up to you.

Nonetheless, I hear the following statements often, and I wish I didn’t:

I’ve been to Europe twice and traveled around the U.S.

I know lots of people travel with kids and I hope to one day as well, but I’m just guessing it’s a little easier without ‘em.

2. “You look like a natural holding that baby — maybe it’s time for one of your own!”

Yeah, I didn’t even drop it! Clearly I’m ready for parenthood now.

3. “Let me tell you this horrible story about when I had my baby…”

As mentioned, I do want kids someday. Probably a little less now, thanks.

Let’s trade horror stories after, because right now the only thing I can add to the conversation is how once my dog scratched me and it kinda hurt.

But — you know what? Neither are you.

If they’re not, can we send them back?

...Oh, you’re just saying this because my kid will be half-Asian and half-white. Got it.

I don’t control the reproductive habits of everyone else, so I literally have no idea.

Why are you asking me this?

Thank God. The dog can be left home alone for a few hours, but I think the authorities frown upon doing the same with kids.

Plus, he stopped waking up every few hours fairly soon after we adopted him. Sleep is good.

Come on people, make up your minds!

You can’t have it both ways.

Nope. But I listen to music a lot, so that probably helps.

Not in the next nine months, that’s for sure.

But don’t worry, I guarantee you’ll know. I mean, you probably won’t be one of the first to know… but, like, you’ll meet the kid before they go off to college.

Seriously, stop saying these sorts of things to people who can get pregnant, even if you are one yourself.

It’s no one’s favorite topic of conversation, and it’s probably serving up some uncomfortable moments, whether you’re aware of them or not.

(Our mothers and parents are exempt, of course, because they’re probably going to ask whatever they want anyway. So let’s just say it’s OK. Hi, mom!)

If you like this article, please share it! Your clicks keep us alive!
Tags
Children
marriage
childfree
30th birthday
women