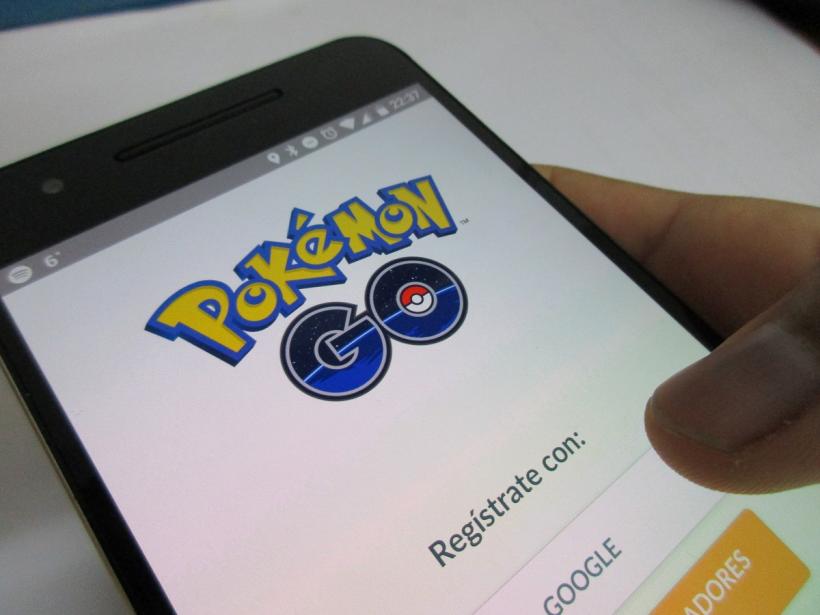 I’m sure the Pokemon Go phenomenon will fade before long, but for the moment it’s just plain FUN that might even be good for you. Image: Eduardo Woo/Flickr (CC BY-SA 2.0).

The game cannot fix and should not distract us from the shit-fucking terrible goddamn week we’ve had in the world, but it can remind us that we all need to practice self-care.​

And not just that “I feel a little bit sad today” depression.

I’m talking that “feels like the water is rushing in and rising until it covers my whole face and nose but I still can’t make myself get out of bed and also my hair is very dirty” kind of depression. That “Well, at least I can always commit suicide, has at times been an extremely soothing thought” kind of depression. That “better not breed because my biological kid might be a weird, defective lump of chemical imbalances that just kind of flops and moans” depression.

My depression is pretty well managed by pills from a doctor, but every once in a while that dick-ass depression studies the “Wipeout” course of my medication long enough that it can just dash through it and back into my brain again, like there weren’t even any giant swinging balls there trying to take it out.

When that happens, the two easy, silly things that I always know help, even if just a little, are going outside and moving around.

“Have you gone outside and moved around?” he’ll ask.

“NO OBVIOUSLY NOT, I JUST SAID I’M DEPRESSED, MOTHERFUCKER.”

(My depression does not care for suggestions, unless that suggestion is: Have you tried crying and lying motionless?)

But here’s the thing about Pokemon GO, the new phenomenon that uses GPS technology to turn the real world into an interactive video game: It tricks you into going outside and moving around.

It makes you think that shit is fun!

So while much has been made of the physical health benefits of a game that makes walking a core component of success, it also makes sense that people would be seeing mental health benefits from playing Pokemon GO.

The Pokemon GO Stories thread on Reddit is a hotbed of ugly-cry stories from people who rarely leave the house for mental health reasons but are finding themselves interacting with the world as a result of the game.

One user explains in his post entitled, “A Legitimate Reason To Leave My House”:

I've been suffering from bouts of depression and anxiety for about 5 years now. There are days when I feel resigned to my bed and I barely have an urge to get up (except if I need to feed myself).

I've been a casual fan of Pokemon for most of my life and I started playing it in the second generation then picked it up again for the fifth generation. I knew I was going to have fun with Pokemon GO but not in the ways people have expressed so far.

Friday was seemingly another day that I thought would be wasted. Some personal and financial issues have been bothering me and internally, it felt like there's no point to doing anything. Finally, around 9pm, I decided I would get up and play Pokemon GO for 30 mins then scurry back into my home. That first day, I caught around 30 Pokemon (mostly Weedles and Pidgeys) but I was genuinely excited to be outside, even if I wasn't interacting with that many people.

I hope that Pokemon GO isn't just a fad that's caught the internet on fire so far. It's done incredible things for many people...including me. :')

While there are real issues related to the Pokemon GO craze — the dangers of playing while black, data and privacy fears, the riskiness of driving and crossing streets while Pokemon hunting — there have also been real healing benefits to people who feel isolated by mental health issues like social anxiety:

Hi!! I am very happy to write this. I am a small, shy girl and I have struggled with autism and social anxiety my whole life. I have never been able to look people in the eye ever, and I always get too afraid to even say thank you to a cashier, as much as I want to. Yesterday I installed Pokemon GO and my friend and I went walking all around my city to Pokestops. A lot of people asked what team we were on, and most of them were Blue, and so was I.

For the past 2 days, I have been outside 14 hours each day, when usually I sit inside and play video games on my computer. During these two days, I didn't feel afraid when I told people that I had found a Bulbasaur earlier or something like that. I even held (and started) conversations and I have never been able to do that before! I could look people in the eye and not feel afraid. Sometimes I would get some anxiety if it was a group of people but I pushed myself anyway, and they were nice too. I went to Starbucks and I could quickly respond to the barista and look her in the eye, and say thank you! I know maybe these are simple things that most people can do, but for me these are a struggle, and I'm very proud and happy with myself.

I even bought some lures and used all of them in a place where there were 3 Pokespots right next to each other, people would ask “Who is Puppybums?” I would get scared but I would reply that it was me, and they would say thank you for the lure. I felt happy because all of the people were happy about the Pokemon that came.

The people I never expected to be nice people were nice, like the girls that look like the girls that used to bully me were actually very kind and funny, and the guys that seem loud and annoying and are on skateboards all the time were genuinely happy to talk to me. It has been a strange, but nice experience. I am glad this game exists, because I don't know if I would ever find a way to experience this.

I apologize if I talk weird, I don't mean to, I just don't know how to explain well? Also! Thank you to the Reddit community because I would be lost on many things if it wasn't for your guys posts and advice!! Everyone, please be safe out there, yes people can be very nice, but some people are not, so be careful! Also, drink a lot of water, because it's very hot out there!

Thank you all, thank you Niantic, Nintendo, and thank you to the people that were nice to me today, even though you might not see this, it means a lot more than you think.

EDIT: eeek I didn't expect it to be so long!! Sorry everyone.

Another user noted that the game has helped their agoraphobia:

The game has helped people with depression as well:

It's no secret that I'm a loner. I tell people this up front when they meet me, not to expect things. (By meet, I normally mean online, safely behind my PC)

Over the years my lonerism has gotten worse and worse. With that, I'm sure my gloomy nature is more than just that, but I haven't seen a doctor so I won't say I have anything wrong with me.

As to not make this a dreadfully long post, I'll sum up that I went from outgoing, semi-fit to not caring what I eat, wear, look like (For the most part). I stopped being excited for anything that was outside the borders of my home. That is, until I found out about Pokemon Go.

I've recently downloaded it and the first few hours, I sat there, staring at my character and then glancing outside. Wanting to, but afraid to actually go. Today, I went. And I didn't plan on going very far, there was a pokestop closeby [sic] and I thought that'd be a good start.

It felt so liberating to walk there, with a sense of purpose I've not felt in 10 years. (That's how long I've been sitting at home) I kept walking and went to two more pokestops. I only caught two pokemon but I loved every second of it. I smiled the entire way that I thought I'd share that with a bunch of people that I don't know.

Maybe, perhaps, a few of you are also excited but afraid. Hopefully, you'll take the same step I did. I promise you won't regret it. (Unless you don't look left 'n right before crossing with your phone infront [sic] of your face.)

I'm a caregiver to those with mental and/or physical handicaps. Today, a co-worker and myself were talking about PoGo and how she found a Squirtle in her salad before she came to work.

Later on after everyone but one client (we say “clients”, not “patients”) is in bed, he starts playing with one of our phones. He's a quiet and sweet young man who only says a few garbled words as his form of communication, other than that he is quite mobile and capable.

He soon sees the all-too-familiar Pokeball that opens the PoGo app. “Pock-mon!” he cheers. “I play?”

Who could say no?!

Not soon after, he is quietly yet excitedly prowling around the day-room and hallways of the group home, hunting down anything that pops up on the screen; with the help of an incense I activated for him.

He hasn't expressed interest in anything for a few months, so this is a big deal!

There’s even been some research that the game might help teach social interactivity to Autistic people who want help in this area. 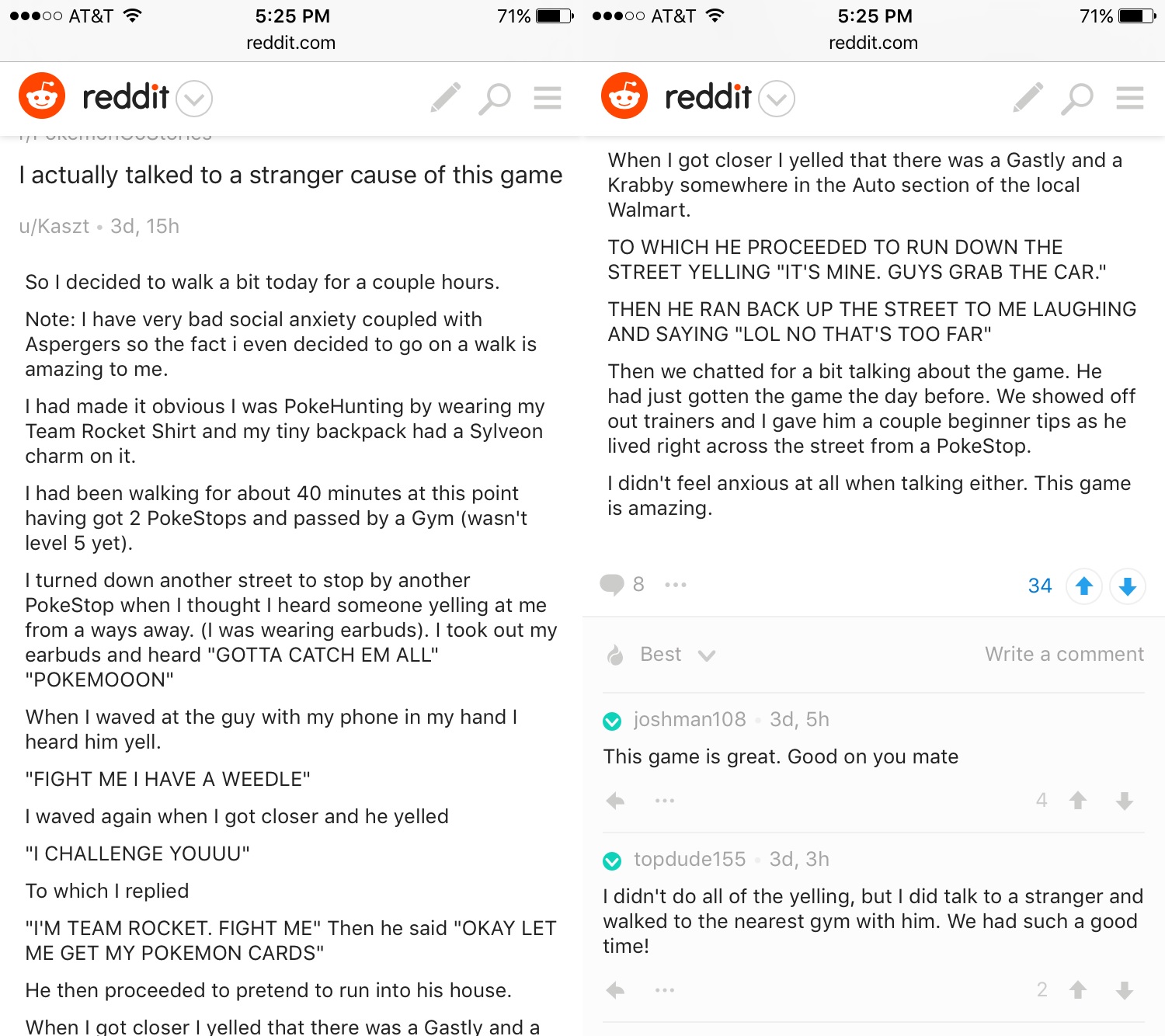 I mostly downloaded the game because I thought my 4-year-old son would think it was fun. And we have had a good time checking into Pokestops on the way to day camp and finding a Bulbasaur on the corner of the sofa.

But I just as quickly found myself playing on my own — lengthening walks to the grocery store with Pokestop detours, interacting with people in my community, and smiling at the Poke-activity all around me.

I’m sure the Pokemon GO phenomenon will fade before long, but for the moment it’s just plain FUN that might even be good for you.

The game cannot fix and should not distract us from the shit-fucking terrible goddamn week we’ve had in the world, but it can remind us that we all need to practice self-care, whatever package it comes in.