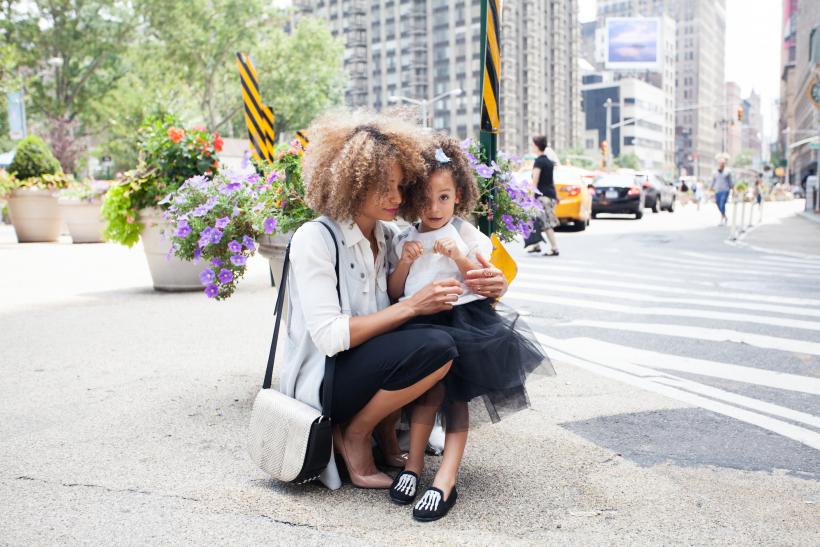 Values should carry over into one's parenting. Image: Pexels.

I still struggle with my own learned and internalized ideas on how to keep my daughters safe and raise responsible, decent human beings.

My feminism is black, intersectional, and womanist. I’ll be that person championing for the rights for black women, trans women, disabled women, and all women.”— Jenika McCrayer

Yes, indeed! Jenika spoke my truth, and there are so many reasons I appreciate the article the above quote appears in.

I could write a strikingly similar piece from the lens of my own experiences, except I’d add another group to that list of people whose rights I stand firm for — children.

My beliefs about people’s rights, including my own, are a significant factor in how I define myself, how I identify, and how I treat other people.

And since I happen to be raising people, my approach to parenting must reflect those beliefs too.

Otherwise, I risk robbing my daughters of the same sense of personal agency and social responsibility that I believe promotes more confidence and compassion among people in the world.

Our society treats children as a group that cannot be trusted and that needs to be guided, usually through punishment, physical violence, forced education, and little-to-no input in how they spend the majority of their time. I disagree wholeheartedly, and I don’t want to perpetuate that narrative.

Essentially, I see intersectional feminist parenting as a solution to the lack of spaces where young people can build confident autonomy in all aspects of their lives — even when their choices and lifestyle go against the beliefs, power, and inherent privilege of the adults in their lives. I’m talking about resisting the power and privileging of adulthood over youth (which some people call “adultism”).

Parents who identify as feminist, or as supporters of feminist parenting, have different means of applying this idea to their everyday choices.

The life topics are pretty similar, though — body positivity and autonomy, open communication, embracing diversity, practicing compassion and respect for oneself and others, doing away with gender-based roles, and embodying confident self-expression.

I feel connected to these topics, but I still struggle with my own learned and internalized ideas on how to keep my daughters safe and raise responsible, decent human beings.

I’m also not immune to the barrage of feelings that come with navigating adulthood, which includes navigating my own experiences a Black woman claiming her liberation, and learning how to take care of herself and her family inside a system that places no value on our lives.

Since I know that the liberation I seek must also be extended to my children, I’ve had to re-think my approach and my default behaviors; thankfully, unschooling with my family has created so much space for that to happen.

Here are 5 ways I try to practice intersectional feminist parenting every day:

1. I speak up about oppression and fear-based logic.

For example, when I hear folks’ rationale for homophobia and my daughters are present, I tell them that it’s bullshit, and I explain why I feel that way.

I encourage conversation that tells them that people have the right to do whatever the hell they please with their bodies and lives, as long as it's not hurting others.

And I tell my daughters that when they judge, they open the door to be judged for any of their own choices.

2. I don’t put my need to show them affection over their right to accept/refuse it.

When my daughters were babies and toddlers, they loved squeeze-y hugs and plenty of kisses. As they grow, that shifted, and it’s still shifting.

The exchanges can be small things that might not seem relevant to us, but matter to them.

For example, my oldest doesn’t like for me to put moisturizer on her face anymore; she wants to do it herself. So I let her. My youngest doesn’t like bras or jeans, she doesn’t have to wear them, until and unless she finds ones she likes.

Simple things like that — when we can honor them (because sometimes children have to wear what parents can afford or what is appropriate for the weather, for example) — help children get clarity around their rights as owners of their bodies.

3. I make it clear that reproduction is their business, not mine.

I don’t assume my daughters will want to have children, and I make sure they know that.

For example, instead of saying “When you become a mom…” or “When I have grandkids,” I say, “If you choose to be a parent...”

4. I don’t assume their sexual preference or their gender identity.

When they’re ready for intimate partnerships, I don’t assume I know that it’ll be with boys, or with anyone at all. I have no idea and I defer to them completely.

We’ve had conversations about gender identity, and we openly allow them to watch and read work created by people in the LGBTQIA+ community.

We remind them that those choices or realizations are for them to make. That, to their father and me, is a vital part of supporting confident autonomy.

5. I don’t mini-me the shit out of my daughters.

Expecting my daughters to approach life the way I do is absurd to me. I don’t have the expectation that they should carry on my legacy through their work, or by being like me in any particular way.

I know that I influence them because they spend a lot of time with me, but that time isn’t meant to transfer aspects of my me-ness over to my daughters.

Each of my girls get to be herself without pressure from me to do what I do. So if they want to work for McDonald’s and praise Jesus on Sundays, far be it from me to say that isn’t cool just because I have no connection with either of those systems/beliefs.

I’m not advocating a right or wrong way to parent.

I’m just saying that, if intersectional feminism is about shifting narratives, defending freedom, promoting equality, and allowing for women to fully own themselves, these values should carry over into one's parenting.

If I truly believe this (and I do), then I cannot separate that belief from any aspect of my volition, including and especially how I support my daughters as they become whoever and whatever they choose to become.