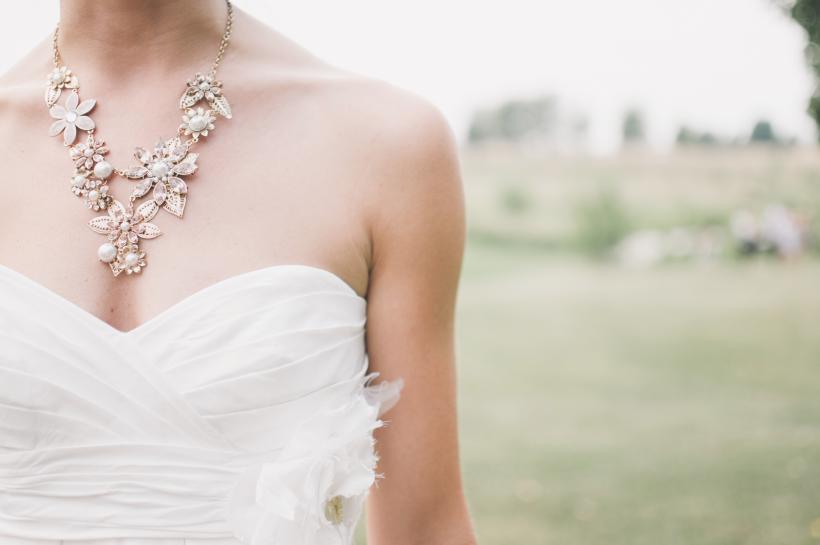 Seeing as I didn’t have any firm idea of what I wanted the dress to look like, I figured it’d be easier. Ha! Image: Scott Webb/Unsplash.

There, I said it.

Some days, it feels like every decision is just a little harder than it should be.

We decided to get a wedding cake — great, what kind of cake do we order? Who’s going to pick it up? (The bakery we want to order from doesn’t deliver.) Will there be a “first dance”? If so, what song? One of my bridesmaid's boobs are too big for the bridesmaids dresses I picked out: What’s a complimenting alternative? And have I even thought of the flower girl yet? (Eek.)

Every decision is really a dozen decisions. And there’s always at least three unexpected obstacles.

The initial place we had chosen as our venue, for example, turned out to be prohibitively expensive. So we chose a new place for our reception and a different spot for the ceremony... Only to find out a week after sending the invites that the new ceremony location wouldn’t work.

Wedding planning is time-consuming and anxiety-producing. It triggers every negative feeling I’ve ever felt.

Remember a couple weeks ago, when we sent out invitations? Even though we invited nearly twice as many people as we could reasonably afford, for me — someone with major issues around rejection — every RSVP “no” felt like a stab to the gut.

But the worst part of wedding planning by far has been the strain it’s put on my fiancé's and my relationship.

Fact is, the aversion Arran initially felt towards getting married hasn’t really abated. If you ask him how he feels about getting married, he will say he’s happy and excited. He might also admit to feeling apprehensive — and rushed.

We agreed to get married this summer for practical reasons. We agreed, I’m constantly reminding him. And yet, when we argue, he acts like the decision was all mine.

A week or so ago, I started shopping for a wedding dress, and guess what?

Shopping for a wedding dress sucks too!

Seeing as I didn’t have any firm idea of what I wanted the dress to look like, I figured it’d be easier. Ha! I thought I’d be easy. I know some women try on literally hundreds of dresses, but I wouldn’t. I told myself ahead of time that anything pretty and appropriate would do.

Because I did not want to spend thousands of dollars on a dress I’m going to wear once, I had started my search assuming I’d find something on sale. In the pictures, a traditional wedding dress is a winning combination of satin and tulle, beadwork and lace.

In real life, on me, these same details looked comical.

The two sale dresses I’d ordered online from Anthropologie’s bridal line, BHLDN, looked like costumes. Even in a size 2, I swam.

My options, I realized, were limited. Also, given the probability that I’d need to get whatever I bought altered, I was running out of time.

The following morning, I felt optimistic. I had an appointment that day in Brooklyn to try on a pre-owned dress by the designer Sarah Seven. In pictures, it looked simpler than the BHLDN numbers and, seeing as its owner was 5’1”, it had already been altered into something more my size.

On first look, the dress was a definite improvement. The simple chiffon and lace hung delicately on my petite frame. It fit perfectly. I told the seller, “I think this is the one.”

The owner gave me the weekend to think about it.

Turns out, the price wouldn’t be the only issue.

On the way home, I texted Arran, I think I found my wedding dress.

The one in Brooklyn.

I sent Arran a picture and asked, What do you think?

Which dress is this?

He would tell me later that he hadn’t realized this was the dress I intended to buy.

All week, I’d been making him look at various dresses. I’d never told him I was texting from Brooklyn.

Fuck finding a wedding dress, because fuck getting married. Fuck flower crowns and handwritten vows. Fuck the fact that Arran’s family had already bought their plane tickets, as he so romantically pointed out. Fuck Arran and fuck our whole fucking life.

He texted back that the dress looked fine, but that he really wasn’t crazy about it, and that he couldn’t really talk because he was at work.

Feeling hurt that he’d been so dismissive, I said a couple mean things.

That’s when I called the whole thing off.

Walking home from Brooklyn over the Manhattan Bridge, I texted, I feel like I’m bending over backwards trying to make this happen, and all I’m met with is resistance. If you want to get married, you can convince me it’s a good idea. I’m done.

In my mind — for a good 20, 30 minutes — the wedding was canceled. Fuck finding a wedding dress, because fuck getting married. Fuck flower crowns and handwritten vows. Fuck the fact that Arran’s family had already bought their plane tickets, as he so romantically pointed out. Fuck Arran and fuck our whole fucking life.

My attitude in this moment reminds me of a popular acronym in recovery: Fuck Everything And Run.

Basically, that’s the exact opposite of that we’re supposed to do: Face Everything And Recover.

My biggest complaint about being engaged is that I feel like I don’t have any help.

The other day I was crying to my mom that there’s too much to do. I was complaining specifically about the day of, and how I literally can’t be in two places at once.

“Tell me what to do and I’ll do it,” my mom said. She was trying to help — only, my mom doesn’t have the greatest track record of showing up for me when I need her.

When I’m afraid, the only person I really trust is me... and maybe Arran.

Sometimes, lately, I don’t trust Arran. What if, on our wedding day, Arran literally doesn’t show up?

When I realized I was thinking this way, I knew I had to stop.

By the time I got to Chinatown, I had stopped crying. I went into a shop and joked with the store owner about how I had just called off my engagement — but did he happen to have any men’s wedding bands for sale?

I picked out some ties and possible gifts for my bridesmaids. I walked up to Soho and tried on another dress.

By then, I’d all but decided I wasn’t doing the conventional wedding dress. The pre-owned dress I’d tried on was probably the closest I’d come to traditional, and my fiancé had just told me it was meh.

Obviously, that option was out.

That opened my search up to a whole world of white dresses.

Walking up Broadway, I kept my eyes peeled. In the window of some random box store, I saw a flowing cotton maxi dress with crocheted lace details. With nothing to lose, I went in and tried it on. It actually looked pretty good in a boho bride kind of way — which, in that moment, I realized was exactly what I was going for.

By now, Arran was texting, asking if I was OK. Sure, I was OK. I had found a potential wedding dress. I had cried it out, and was starting to feel a little bit better.

I wish I could tie this up in a neat bow and tell you everything is all better. Obviously, later that night, we talked about it. We yelled and cried and hugged and aired our grievances and fears.

That’s one thing Arran and I are good at. Admittedly, Arran and I argue a lot — our fights are sometimes spectacular and often ridiculous — but, to our credit, we do a good job of talking it out. Normally, we’re pretty good at working together.

He promised to make more of an effort to contribute to the whole process, in spite of his fear.

In spite of mine, I promised to lighten up.

My hope is that it’s promises like this that make for a happy marriage — and not a perfectly planned wedding.