The End Of Black History Month: You Do You, I'm Doing Me 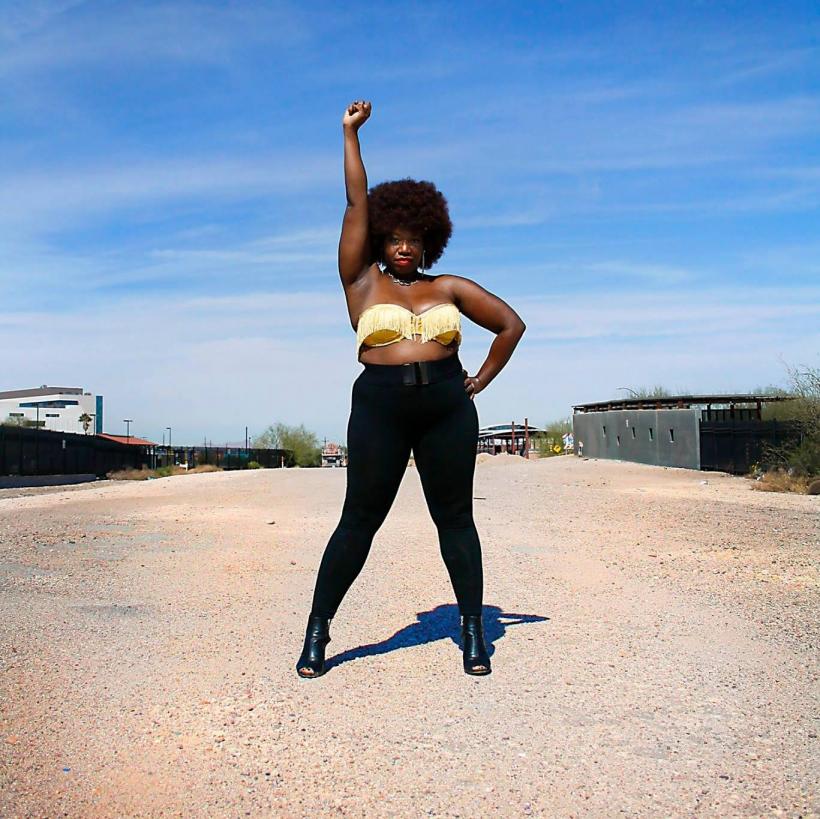 There is only one, beautiful, sparkly diamond like you in this world. Just one. Image: DalaHawk.

Today I’m going to tell you a story about the last day of Black History Month.

Ya ready? Here it goes!

It was the last day of Black History Month, and I was feeling fly. As. Fuck.

I had a photo shoot scheduled with the ridiculously talented DalaHawk. We’d figured out the concept for the shoot that morning, and I had Auntie Bey’s “Formation” on repeat.

Plus, my cheese quesadilla was just the right blend of crunchy-soft with super melty cheese, so life was golden. I hopped in my shaggin’ wagon, turned on The Suffers' “Gwan” full-blast, rolled down the windows, and was on my merry way.

The sun was shining, and I was sangin’, which is like singing, but so much more. When you sang, you put your whole damn body into it. It’s like a one-person concert — you are the lead singer, the backup singer, the dancers — hell, even the drummer!

I was feeling so good I even shared a little sangin’ moment with a guy crossing the street! This last day of Black History Month was off to an epic start.

Then Satan rolled in.

As I continued to my photo shoot, still sangin’ like my braids depended on it, I turned down a semi-residential street and slowed down because UNIVERSITY POLICE DEPARTMENT. They are ticket-happy, and I am in no mood for traffic court.

So, in my fly-as-fuck, I’m-Black-and-I’m-proud, Suffers-induced haze, I slow-rolled down the street sangin’ my heart out.

And then I heard it:

I thought to myself, Self, I think that man just called you the “N” word. Huh. That’s random.

I kept it moving though because I had some fab photos to take. Plus, I was in a giant minivan, and he was walking. In a battle, I’d win.

I rounded the corner and turned into the parking lot, grabbed my things, and started across the street to my shoot.

Now I’m going to pause here because I want you to stop and think about what I, Adiba Nelson, Sista Sassafrass, did.

What do you think I said to this guy who felt it was his civic duty to hurl racial epithets at a woman he had never met, much less made eye contact with?

Okay. Have you imagined it yet? Keep that thought in your head.

This is what ya Sista Sassafrass did: 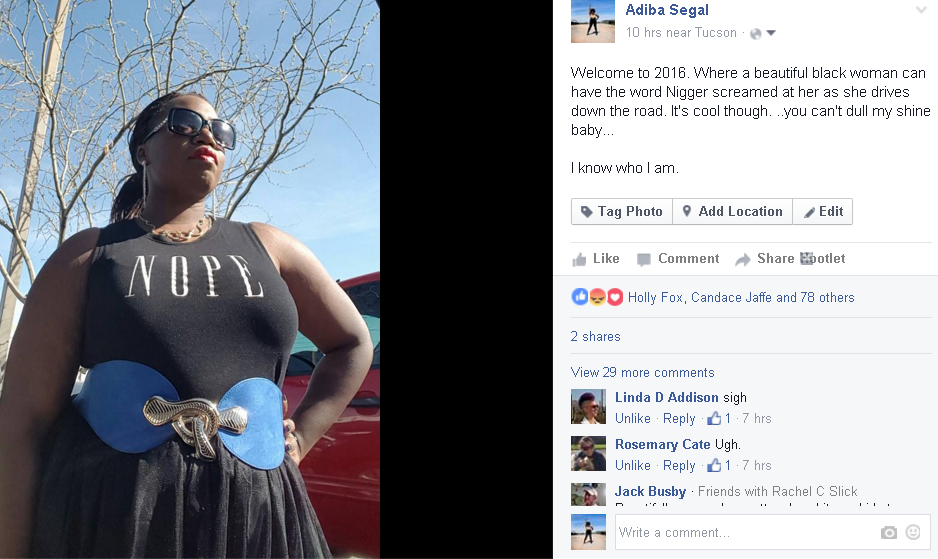 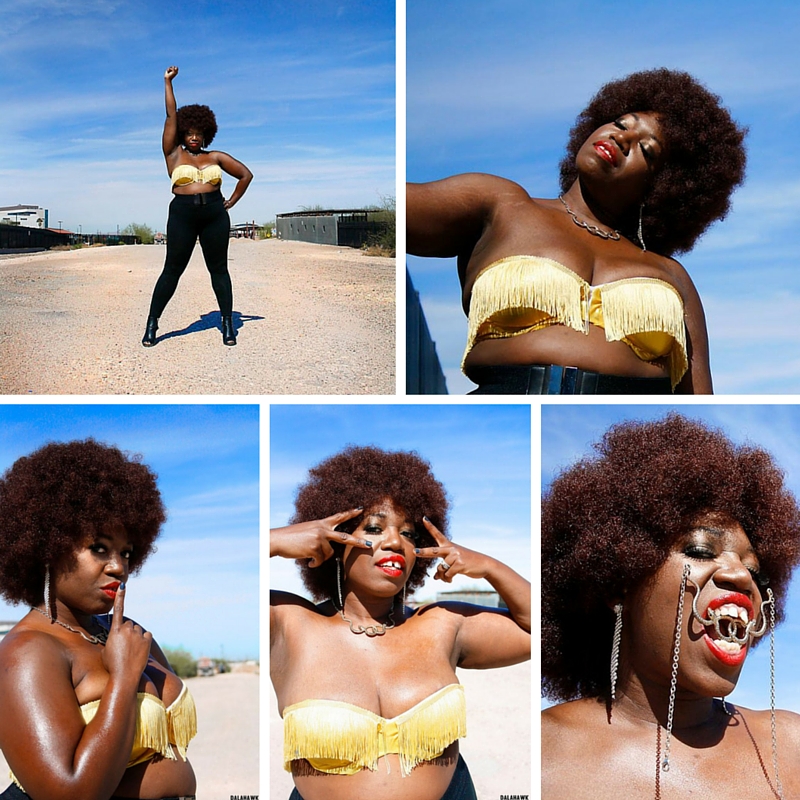 Do you see what I did there?

Let me tell you something, ladies. There are a million people in this world ready to tear you down at any given moment, for reasons they know, and reasons they don’t know. They will all but sell the blood of their firstborn child to make sure you know that they think you ain’t shit.

They will call you out for being too fat, too skinny, too dark, too light, too white, too orange, for having teeth that are too straight, and for having so many damn teeth in your head you could make your own dentures.

You’ll be a smartass for correctly answering every question on a test, and a dumbass for not knowing SCALA (a ridiculously obscure computer language that I only know about because Mister is a computer software engineer).

Are you picking up what I’m throwing down, ladies?

There are some people in this world who will waste their dying breath to say, “Hey! Your shit stinks more than mine! So HA!”

You know what your response needs to be to them? Lemme tell you. It needs to be:

and keep it movin’.

But if you’re feeling particularly snarky, and have some sass to spare, I highly recommend this response:

That’s code for “I don’t give a fuck” — and then, as with the previous response, you keep it movin’.

Don’t you ever, ever, ever, EVER dull your shine for someone else. The universe is big enough to hold every damn star in the sky, so this world is big enough for all the damn sparkle it wants to have. There is room for you to be a one-legged pogo jumper in a rhinestone leotard, setting a Guinness World Record — just like there is room for Bey to be, well, Bey. And Oprah to be Oprah. And Gaga to be Gaga.

Are you following me? If you know precisely who and what you are, ain’t a damn thing this world can do to dull your shine. Sure, it may dim a little at times because life (and death) happens, but the opinions of others are inconsequential to your daily getting-on of life.

Unless that jackass is paying your bills, giving you orgasms so intense your toes curl and you briefly think you’ve traveled back in time to witness the virgin birth,  AND they clean the house the way YOU like it, on the regular, without being asked — then maybe you absorb it every now and again.

Otherwise, nope. And since we know none of that will ever happen, the answer is and forever will be NOPE.

You never absorb it. Ever. It has no bearing on your life.

Hell, they called me nigger for simply being Black and happy.

I’m about to wrap this up, but I guess what I’m trying to say is this: There is only one, beautiful, sparkly diamond like you in this world. Just one. Just you.

So just do you, boo.

Just do you, and shine bright like a muthafuckin' diamond.

If you like this article, please share it! Your clicks keep us alive!
Tags
black history month
haters
self-image
confidence
empowerment
racism