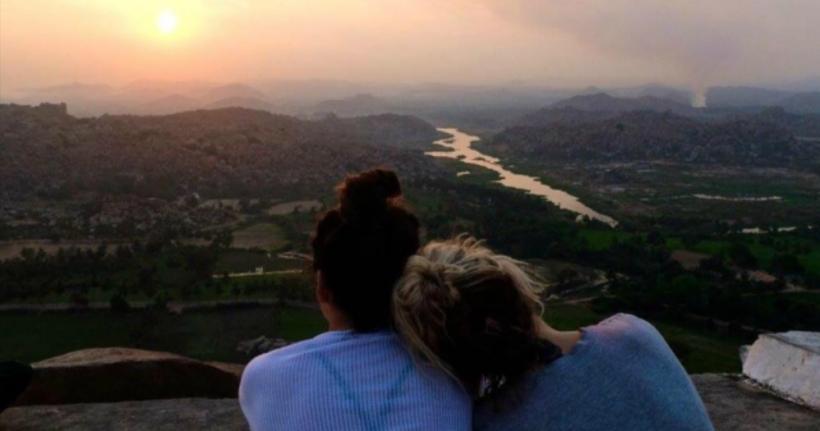 We have a bit of a shituation.

Earlier this year, two completely unexpected things happened to me. I managed to fall in love. And I fell in love with another woman. To be honest, it’s something I never in a million years saw coming.

Traveling with a partner is a true test of any relationship, and I decided to test out ours very quickly. After just one week together, my girlfriend Hannah and I were off on a month-long journey to India to help out with a social impact program.

Yes, having never even heard each other fart, we were en route to the diarrhea capital of the world.

After surviving a whole month with a bucket for a shower, a hole in the floor for a toilet, two motorbike accidents, a rickshaw collision and copious amounts of Indian street food, I was convinced I was invincible. I was so proud of myself. I had defied the odds. I had successfully made it through India without getting sick and my relationship still in tact. That didn’t last long.

Our journey home began on an Indian sleeper bus. We didn’t exactly get off to the best start, we had a four hour wait on the side of the disheveled road, both of us with food poisoning. My illness, however, was of great severity and neither of us were prepared for what was to come.

After ushering Hannah onto the eight-hour sleeper bus and up the ladder to the material that was our bed, it hit me. Holy hell, I feel sick.

My only solace and point of comfort for my queasy stomach was not Hannah, it was the tiny window next to me. I pushed the minute opening up and stuck my head out the window, my dinner exploding out my mouth.

After eight hours of continuous and violent vomiting out of the bus window, Hannah eventually woke from her sleep to hold my hair back and wipe my vomit covered face with her T-shirt. I was convinced it couldn’t get any worse.

After stumbling off the bus coated in vomit, I arrived at a beautiful five star hotel with running water and a flushing toilet.

People say love is the best feeling ever, but I think finding a toilet when you’re having diarrhea is better. An hour of sitting on the toilet later, I think I finally learned the true meaning of “you never really appreciate what you’ve got until it’s gone.” Toilet paper is a good example here. After regrouping and gathering up my pride I snuggled into Hannah on one of the single beds we had decided to share. If I was going to make it to my flight in six hours some sleep was necessary.

In my sleep I had managed a truly brave feat, chancing a fart when I had the runs. I woke up to the feeling of something very warm. Shit, I’ve got my period. I aggressively throw the covers back. Surely not. I look up at Hannah with bulging eyes and my hands covering my mouth. We have a bit of a shituation.

I stand up and I am completely and utterly covered in my own shit.

Trying not to let any remnants fall to the floor, I shuffled myself off to the shower the best I could. I stood in there still fully clothed and still covered in poo. At this point I was fretting for the survival of our now four-week-old relationship.

They say laughter is the best medicine, unless you have diarrhea. I badly needed a doctor. I stumbled light-headedly into the hospital and plonked myself in front of a non-speaking Indian doctor.

Six hours, four IV drips, three sets of sheets, one change of clothes and two missed flights later I was returning to my home.

Four months later, I ponder on the adventures of India and everything Hannah and I went through. While it might've been horrendous at the time, my sickness bought us closer and helped me embrace my new, totally unexpected relationship.

Yes, I truly found myself in India.

If you like this article, please share it! Your clicks keep us alive!
Tags
fart
India
LGBTQIA
Travel
Relationships
girlfriend
illness
diarrhea