I'm Coming Out: A Paranoid Schizophrenic Talks About Stigma

The ones who sneer, judge, and make ignorant comments (or worse) — they’re the weak ones. Not you.

To those who suffer in silence: You’re not alone. Ever.

It’s been about six months since I came out of the closet.

No, I’m not gay. I’m a paranoid schizophrenic.

My journey through mental illness has been a bit different from most. I was diagnosed when I was 20, but I’ve only recently begun telling my friends and family.

I’m pushing my way towards 32 this year. That’s over a decade of hiding from some of my closest friends and family members.

It wasn’t anything they did wrong. It was due in large part to my paranoia — I didn’t trust anyone. In the beginning, it was because I had important things to do, divine missions that had to be accomplished and I couldn’t be hindered by friends and family who didn’t understand.

Eventually, though, I got into a relationship and I began to open up a little bit. My girlfriend and a few close friends started to see something was wrong. My facts didn’t add up. Things weren’t making sense.

I ended up in the local hospital’s psych ward, which was far scarier to me than most aspects of my illness. I said what they wanted to hear and took whatever medicine they gave me. Anything to get me out of there.

I took various medications with varying degrees of success. I went to therapy regularly. There were always issues that would pop up, but I managed to get my life in order.

For obvious reasons, the relationship I’d had didn’t last long past the diagnosis — and I, in my usual way, pushed people away. None were strong enough to withstand the bites and barbs I used to keep them from seeing me any weaker than they already had.

For the most part, I went through the process of being diagnosed and learning to live my life with a chronic illness alone. That wasn’t anyone’s fault but my own. Even those I let in didn’t get very far —​ like I said, I was paranoid.

I went through a lot of ups and downs, and I began to learn and understand my illness and how better to handle it.

The good news is that this story has a happy ending. I found a wonderful woman who I’ve learned to be completely open with, just as she can be with me. We fell madly in love and got married. About a year after that, we bought a house.

I made the decision to come out of the mental illness closet and face the world without fear or shame.

Buying a house is a very stressful endeavor, and I hit some speed bumps. I’d opened up about my illness to an extended family member because she’d had some mental health issues in the past. I thought she’d be compassionate and understanding to my plight.

My wife and I decided not to go to a concert with this person and few others so that we could prep everything for the new house, thus reducing our stress, and also my symptoms (which were flaring). She wasn’t happy with our decision and later, when I explained that my mental illness was to blame, she  told me she didn’t give a fuck. She hasn’t really spoken to either of us ever since.

Score another one for the I really shouldn’t tell people the truth column.

Despite the stress of buying the house, family issues, and — on top of it all, our car briefly died — we managed to move into our beautiful little house. We’d made it through everything that came our way, despite the setbacks or difficulties. And not once did anyone ever have an inkling of my illness.

I was content to leave it that way and live with my mental illness locked away in the shadows.

But then my wife said the five most beautiful words I’ve ever heard: “You’re gonna be a daddy.”

I was overjoyed, beyond excited. But that joy quickly turned to fear when I remembered that schizophrenia has been known to have a genetic link. What if my son has it? What if I have an episode, and he doesn’t understand why his daddy’s acting strangely? How will he live with the stigma that his father’s a madman?

I wasn’t going to let that happen.

I made the decision to come out of the mental illness closet and face the world without fear or shame. My son will grow up in a house that doesn’t stigmatize mental illness, but instead, strives to understand it. Being an illustrator, I created a short comic that told the world about this very important part of my life. I posted it on Facebook and waited for the anger and the backlash.

It never came. I was awash in a sea of love and support from family, friends, even those I hardly knew, applauding my bravery and strength for being so open and honest. Those who also suffered from various other mental illnesses opened up to me and told me how they understood my plight.

Allie Burke, a fellow schizophrenic, mental health advocate, and talented writer, introduced me to a group called Stigma Fighters. They listened as I told my story. They were compassionate and supportive, and I gained friends who didn’t look down on me or judge me for having an illness.

For the first time in my life, I wasn’t alone.

I’d say it was perfect, but life rarely works that way. There were definitely some bumps. My mother had a rough time with it, and I don’t blame her for that. Her sister — my aunt — had been schizophrenic. She abused drugs and sold herself for money to pay for those drugs. She eventually committed suicide in prison.

So for my mother to hear that her beloved first-born son had the same illness... Well, it was a hard pill to swallow.

As with most difficult things, the first thing she did was deny. I was misdiagnosed — she was sure of it. She asked me questions about what doctors I’d seen and sent me a link to another mental illness that had similar symptoms, but without the hallucinations. There really wasn’t anything better about that illness, except that it wasn’t schizophrenia.

But to my mother’s credit, she eventually accepted it all. I’d been to all the right doctors, done all the right therapies, and now, I even had a wonderful support structure. I was going to be OK.

It’s been said that having a loving and supportive family is one of the biggest factors when it comes to people like me being able to make a stable healthy life. I will attest to that.

Since becoming open about my mental illness, my life has only improved. Yes, there are those who still judge. There are people who are completely awful (like one woman who actually said Eww when she found out). But the people who matter, my closest friends, my family, and my wife have made it infinitely easier to be open when I’m having a hard time, or just being able to laugh and joke about it.

I know it’s rare for things like this to work out so well, and I appreciate it for every moment that I have it. I also know it’s not like this for most others like me.

And that’s why I’m writing this — first, to tell people that there is always hope, no matter how great your suffering. Don’t give up, be patient, compassionate, and supportive. It’s a long, hard road, but I promise you there are plenty of treasures along the way. Treasures that can’t be put into words.

And lastly, to those who suffer in silence: You’re not alone. Ever. For every asshole who tells you that they don’t give a shit, there are hundreds of us waiting to reach out and give you the hand you need. To tell you that you matter and that you have the strength in you to keep going, because it’s worth it.

The ones who sneer, judge, and make ignorant comments (or worse) — they’re the weak ones. Not you.

You’ve got this. And if you don’t, we’ve got your back. 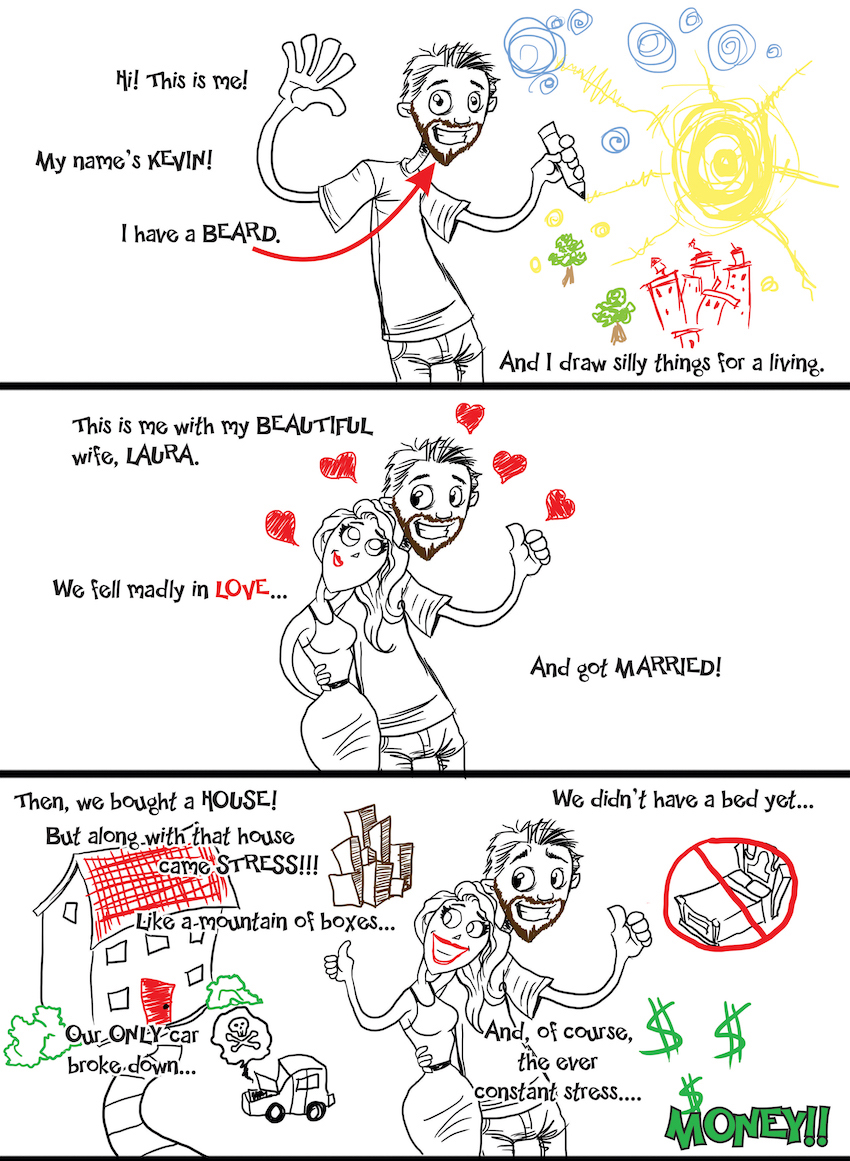 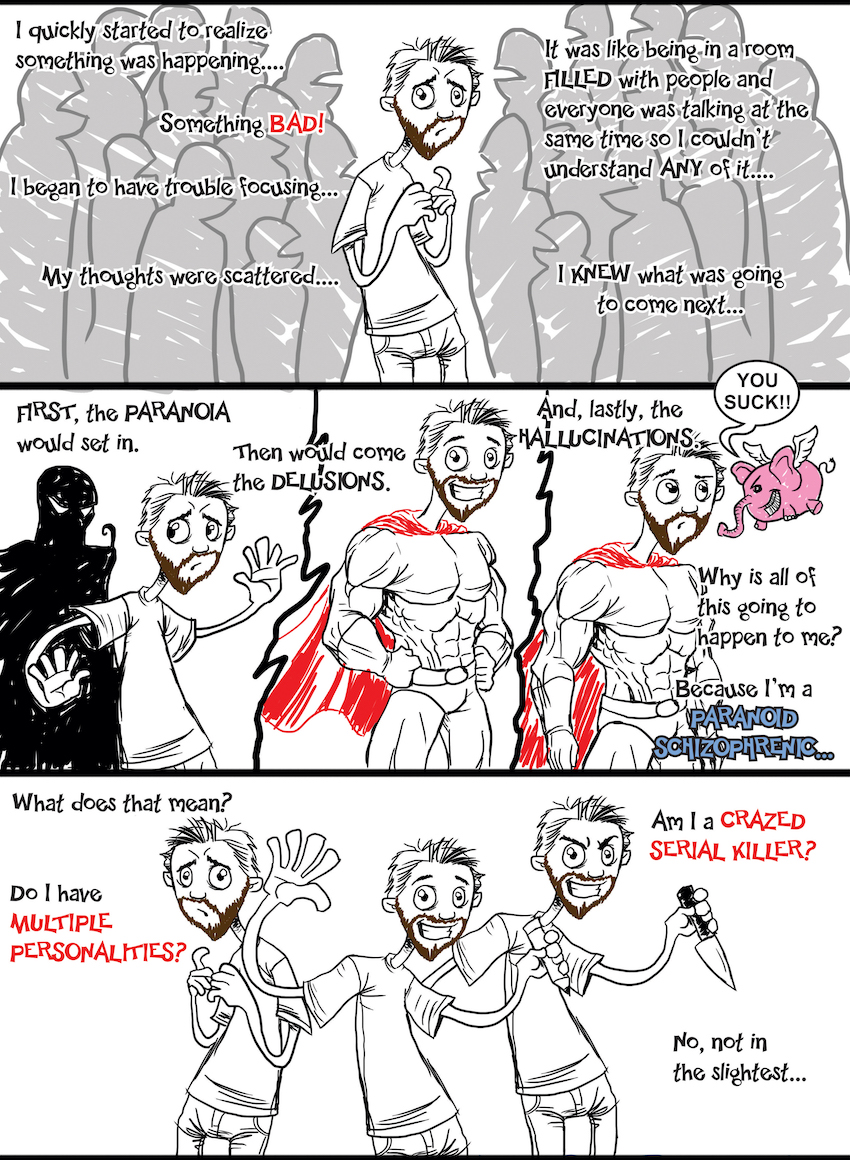 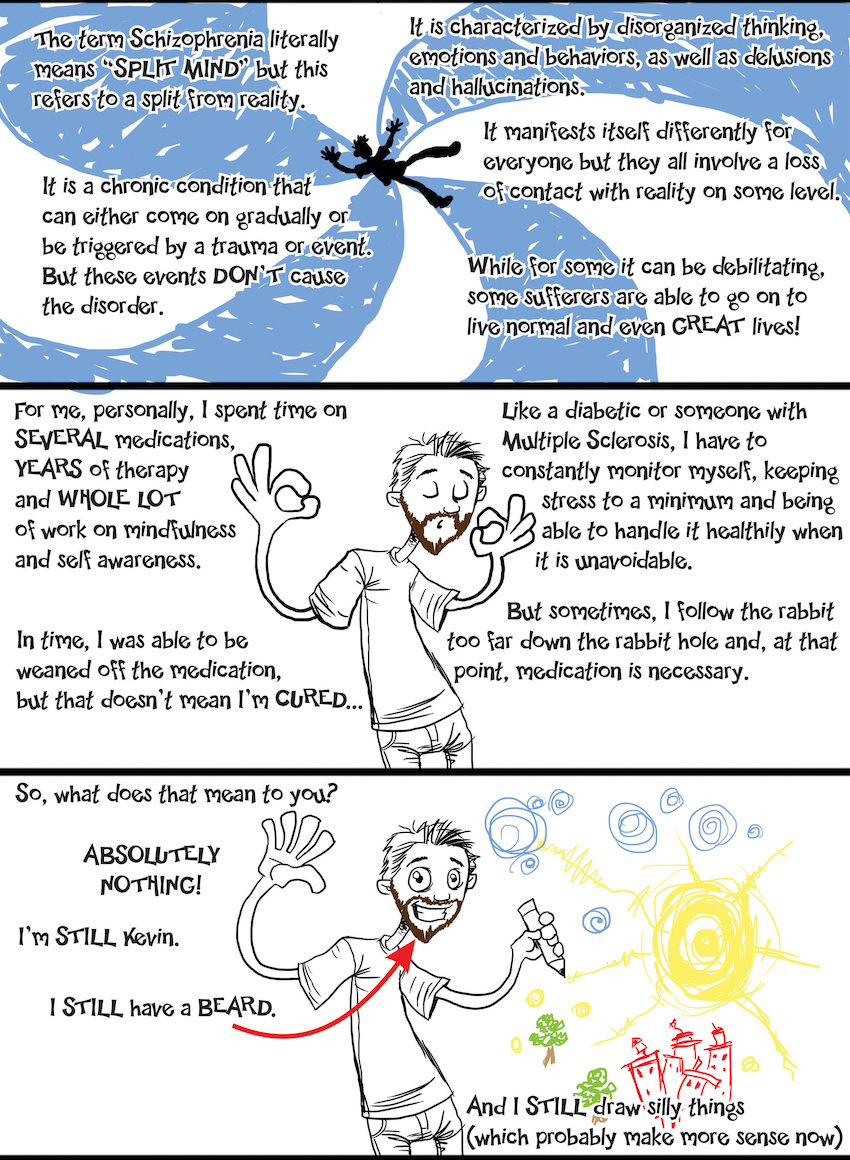 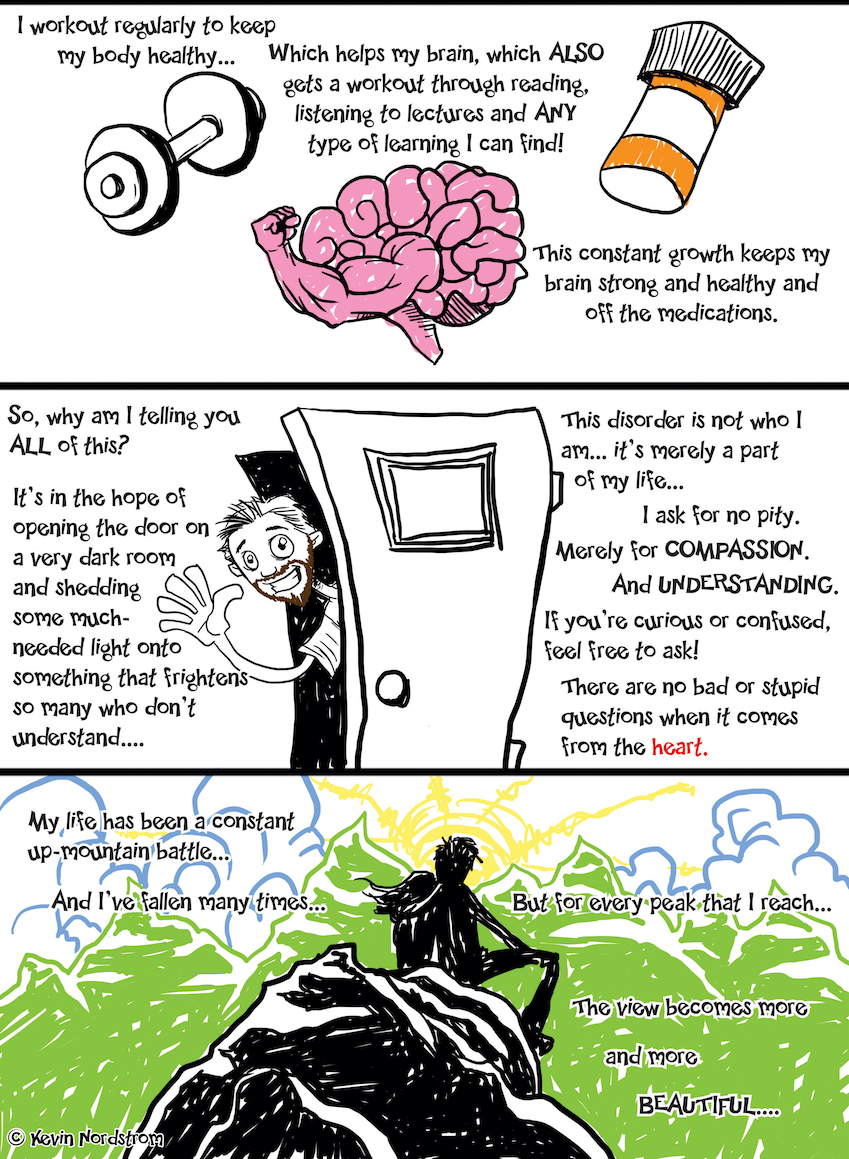 Opening Up.... by MrDinks on DeviantArt

If you like this article, please share it! Your clicks keep us alive!
Tags
schizophrenia
mental illness
Stigma
coming out
comic

Am I Only Successful Because Of My Schizophrenia?
Kevin Nordstrom