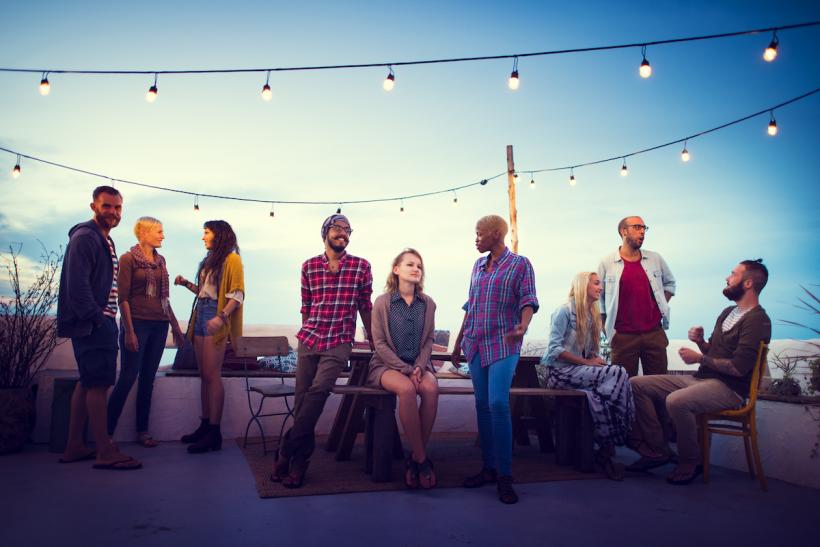 I wasn’t simply an accessory to misogynistic behavior — I was actively participating in it. Image: Thinkstock.

I thought being “one of the guys” meant adventure and freedom from the oppression of a feminine life that didn’t quite suit me.

When I was younger, I wore that label like a badge of honor.

I wanted to separate myself as a cool girl: the kind who could hang with the guys and take a joke, but still keep a stronghold on my femininity. I felt unique in my passion for martial arts, my affinity for Call of Duty, my go-with-the-flow attitude toward boyish adventures.

I wanted to be “one of the guys,” while still retaining the distinction of my sexuality.

I longed to be the quintessential cool girl — desirable yet approachable.

But in retrospect, all that really amounted to was internalized misogyny.

Ostracizing myself from other girls was a way of declaring that I was better than them. I wasn’t drama. I wasn’t uptight. I didn’t waste my time primping or contemplating what to wear on any particular outing. I defined myself by lumping other girls into these certain stereotypes. I didn’t define myself by who I was as an individual, but rather by who I wasn’t, in broad, stereotypical terms.

I made myself feel special in my otherness and swooned every time a boy would take note that I wasn’t like most girls. I took it as a compliment, which is exactly how it was offered. I relished the unkind way other girls were painted, so long as I felt I was on the outside looking in.

I wasn’t like other girls. I eschewed traditional femininity, opting instead for the more desirable traits of my male friends.

Not all of them, of course. I couldn’t be too brusque or too lacking in decorum. There was a line we all knew I wasn’t allowed to cross.

There are unspoken rules to being the cool girl. I could be like the boys just enough to separate myself from the rest of the girl pack.

I perched comfortably on the precipice of masculinity, balancing on the fine line where I could still keep my feminine allure. I was the best of both worlds. A patriarchal unicorn. Or at the very least, it was what I aspired to be.

Part of being the “cool girl” who can hang with the guys came naturally to me. I didn’t mind low-key activities that required little preparation. I had an adventurous spirit that lent itself well to spur of the moment trips into the middle of the desert, where we would jump into a murky pit filled with water from the flash-flood rains.

But the path to becoming a cool girl involved more than fun outings and lazy afternoons.

It wasn’t enough to be able to throw back a beer or watch sports. It’s part lifestyle and part culture.

A prerequisite of being able to “hang” involved standing idly by while I let misogyny run rampant.

I was supposed to be able to take a joke, especially when those jokes were derogatory toward women, because, after all, I “wasn’t like other girls.”

It wasn’t about me. It was about them. The others. Other women and I were not on the same team. Not if this was who I wanted to be.

I was supposed to have no problem with men objectifying women. I was expected to cluck in approval when they would comment on the outfit of a girl at the gas station. Because her skirt was shorter than anything I’d wear. Because she wasn’t like me. I could feel myself getting “bonus points” for chiming in when they ranked other women.

The more blatant misogyny I could stomach, the higher my status became.

I wasn’t simply an accessory to misogynistic behavior — I was actively participating in it.

The efforts required for me to be "one of the guys" required pitting myself against other girls, constantly tearing them down to make myself feel special. I figured as long as I wasn’t saying these things aloud to other women that there was no harm done. I was ignorant of the concept of rape culture, and how horrifically I was contributing to it.

I had a couple years of hollow glory before my house of cards began to crumble. As I slowly became closed out of the circle, I found myself alone because I had fenced myself off from other girls.

I reinforced stereotypes I should have been trying to escape. In trying to conform to this impossible standard, I was making it harder not only on myself, but on other women as well. By saying I wasn’t like other girls because of my interests or personality type, I was dismissing any other girl who felt the same.

They were fake. They were doing it with ulterior motives. I was the real deal. I was the cool girl. I couldn’t see past the endgame of momentary popularity and realize how destructive my behavior was until it was all behind me.

There are many reasons why I wish I could go back in time and give my teenage self a firm slap across the face, but none quite so much as my blasé attitude toward other women and feminism in general.

My status as a cool girl was a grain of sand, ready to wash away the moment I stood up for myself or another woman.

I thought being “one of the guys” meant adventure and freedom from the oppression of a feminine life that didn’t quite suit me. But instead it made me quiet when it mattered, loud only within the confines of what was allowed. My allure produced precious little other than “friends” who soon resented me for not reciprocating their advances.

I had a couple years of hollow glory before my house of cards began to crumble. As I slowly became closed out of the circle, I found myself alone because I had fenced myself off from other girls. I had to build friendships from scratch. I had to learn who I was when the thin shell of the cool girl persona cracked, revealing a deserted plot of uncultivated personhood.

But luckily and ironically, women were waiting in the eaves to help me, to lift me up, to bring me back to who I should have always been.

Being the cool girl made me feel unique and special for a fleeting moment, but in truth, there was no individuality to be found in being “one of the guys.” I was following a patriarchal formula that allowed me only temporary passage into this circle.

It wasn’t a position I could hold forever. It wasn’t where I belonged if I wanted to be my own, boundless self.

That was something I could only achieve on my own — while other women lifted me to my true potential.

If you like this article, please share it! Your clicks keep us alive!
Tags
girls
Friends
feminism
men
one of the boys
not like other girls
cool girl
internalized misogyny
tomboy
Mean Girls
rape culture
objectification
misogyny
sexism
friend-zone