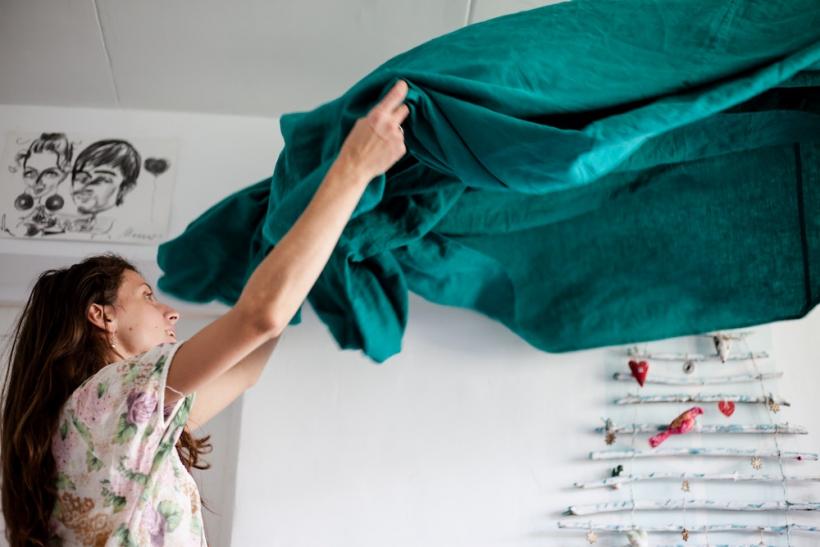 Photo by Volha Flaxeco on Unsplash

Last week, the internet went into an understandable uproar when a Christian woman decided to take to Facebook to talk about how she is #blessed to pick up after her husband. Seriously.

Holly Simon starts her post by describing how she daily picks up her husband’s towel to put it on the hook, puts his grooming products away, closes every single drawer he leaves open, and puts away his shoes and anything else he leaves in his wake on his way out the door. She describes for a brief moment, the bitterness this used to inspire in her.

“Don’t I have enough to clean up daily after the kids!” Simon writes. (Answer: yes, yes you do.)

Ah, but wait. There is more to this story than meets the eye. This isn’t a post about how her husband should clean up after himself. It’s a post about how she shifted her attitude to one of gratitude by allowing his mess to serve as a daily reminder that she is not forging her way through life solo.

“The scattered trail of his daily routine means I have a husband who keeps coming home. I’m not doing life on my own. I’m not raising my girls by myself.”

She ends her post by reminding (Christian) women that a mess is actually a blessing. It means you have a person who comes home to you every day. The “irritation” you might feel about a grown man who creates more work for you? “A common attitude trap.” You’re probably just exhausted (I wonder why).

“But Remember,” Simon writes. “It’s not ‘your burden’ it’s your gift.”

After the tremendous backlash her post received, she took to Facebook the next day to “clarify” that people were simply missing the point. Those who were pointing out that her husband was a disrespectful man-child, that she is not a maid, that this is not how equal relationships work, etc. were unable to see the forest of marriage for the trees of lazy husbands.

Her post, Simon insisted, was simply about appreciating what you have. She shared that many who related to the post were widows who knew how important it was not to sweat the small stuff because “you’ll miss those daily annoyances someday.” Be grateful you have a husband who comes home every day. Don’t overthink it. Don’t fight it. It will make your life easier.

While I understand how unfathomable this jedi-level mind tickery is for most, I also understand why there were so many more women in the comment section who were in total agreement. Because the truth is, though I was never foolish enough to write a post like hers on the internet where everyone could see it, I absolutely used to mind-trick myself like this.

I grew up in the conservative Christian world Simon speaks to and carried that culture with me for years. When I felt utterly overwhelmed with all the emotional labor I was doing, I would tell myself that I was falling into negative thinking and redirect my attention toward being grateful for the messes to clean up (healthy, vibrant kids!) and the floors to vacuum (we have a house!) and my husband’s lack of initiative (he helps when I ask him to!). And to be honest, Simon’s attitude isn’t necessarily wrong. It is easier, in a way, to shift your attitude instead of digging to the root of the problem.

Most of Simon’s critics are saying that this is exactly the point: this is a circumstance that can and should be changed. She should be able to expect a certain level of respect from her husband that involves him not creating more work for her. It’s literally the least he could do above “coming home every day.”

But the truth for many women, especially Christian women, is that the conversation leading to change is a nonstarter. Confronting the men in their lives won't lead to change, and rather than facing that uncomfortable truth, they'll guile themselves into believing that they are choosing this imbalance. They'll convince themselves that indeed a mess is a blessing, because they've been taught that wanting anything else is a sin. It’s ungrateful. It’s unwomanly. It’s ungodly.

The reason Christian women use this "turn your oppression into gratitude" trick is because there is no other option that will leave your marriage or faith in tact. The risk of asking for change is that you never get to go back to tricking yourself into believing that your partner appreciates and values you when they make it clear through their actions that they do not. Once you uncover an uncomfortable truth in your relationship, it cannot be covered up again.

It’s easier to remain invisible than to be seen and have your partner show you blatantly that they do not care about how they negatively impact your life. It is easier not to push that boundary, even if it means living the rest of your life using mind-tricks to keep yourself from falling apart.

Living within the rules of the patriarchy will always be easier than challenging it. It’s why so many of us choose to pick up the socks rather than have a conversation about why we’re the ones expected to clean up after our partners. Why make life harder than it needs to be, right? Don’t sweat the small stuff.

But here’s the thing: this isn’t small stuff. You can’t sweep inequality under the rug with a smile and pretend it won’t get trampled out again over time. And that is what’s at the heart of these seemingly insignificant messes. Men’s collective actions both at home and in the world impact women’s lives, and we can’t keep hiding it forever.

The mess men left behind — the one women are expected to clean up (joyfully) — tells us our time is not valuable. The man speaking over us in a business meeting tells us our voices aren’t valuable. The man catcalling us on street tells us our safety isn’t valuable. None of these slights singularly will affect the trajectory of our lives, but together this is not “small stuff.” It is these small moments we collect throughout our lives that show us where we fall on the hierarchy of humanity — but only if we look too closely — which is why many women look the other way.

Don’t overthink it. Don’t fight it. It will make your life easier.

The truth of that is both undeniable and seductive — unsustainable and destructive. We can live like this forever. We can’t live like this forever. Both are true. Which is why those of us who have the agency must leave behind what is easy in pursuit of what is good. Not everyone is going to demand change and growth. Not everyone is going to demand better, and there is no convincing everyone that they should. But I am going to higher my expectations of the men in my life, and I think you should too

If you like this article, please share it! Your clicks keep us alive!
Tags
emotional labor
blessing
Christian
cleaning
marriage
husband
mother
parenting