Screen Time Got My Family Through An 18-Hour Flight. I Regret Nothing. 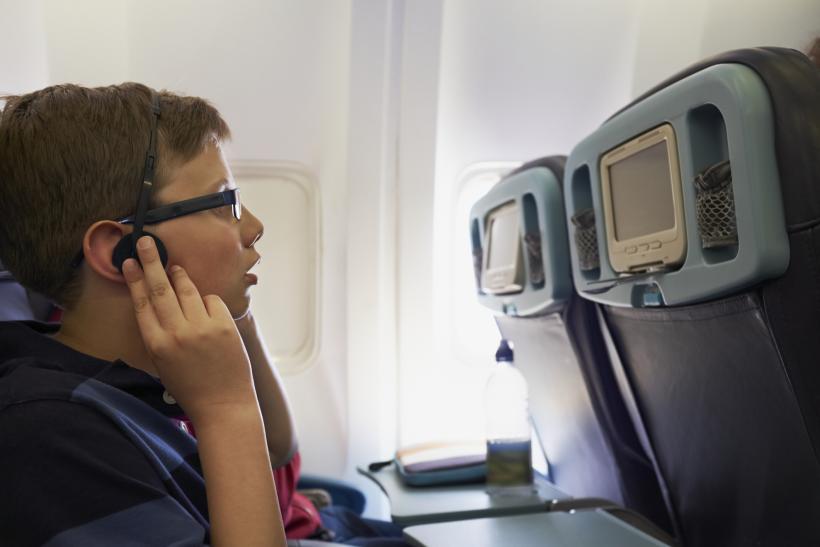 I want to make the kids turn off their screens as I would in regular life back on the ground, but it seems like this is not the time to stick to rules or try for a parenting victory.

I can laugh, since he hasn’t been talking to me nonstop the entire flight.

I was cavalier when I bought plane tickets for our whole family to visit Thailand.

Rather than putting our disposable income towards things like savings or not-terrible furniture, my husband and I travel quite a bit. While we were planning this trip, the low ticket prices and the fact that my brother, who's a big fan of my kids, lives in Thailand made it seem reasonable to take the two little ones along.

We failed to factor in the length of the flight from Los Angeles to Bangkok.

I dislike planes in general, what with the claustrophobic feelings they induce in me, as well as the seats that were absolutely not made with my fairly wide ass in mind.

As much as I’m fascinated by what Owen is thinking (truly), I don’t always need to be updated on it.

Eighteen hours, even if prepared with reading and art material, snacks, and an upgrade to China Airline’s family couch seating, is still EIGHTEEN HOURS.

Having lived to tell the tale — all members of my family are still alive, happy to report — this is how things went down:

Personal screens are a big hit, right in front of all our faces on the seat backs. The boys play poker and checkers and some horrible Bejeweled thing that I resist for four hours, then quickly become addicted to. They watch movies, including The Force Awakens — which isn’t out on DVD yet. I read, watch a movie, etc. No drama yet.

Then people start to get tired.

I try to configure the family couch for lying down, or at least the less-restrictive seat belts. Our positions are different, but not necessarily better.

Children are reading and playing digital checkers. I wouldn’t say I’m having fun, but honestly this isn’t bad. I want to make the kids turn off their screens as I would in regular life back on the ground, but it seems like this is not the time to stick to rules or try for a parenting victory.

Owen is dozing on and off, crashing into his brother with twitchy legs. I finally lean again the plane wall and stretch the kids out around me.

Owen is so tired that he sobs about my cruelty. “Why are you making me sit with you?”

I can laugh, since he hasn’t been talking to me nonstop the entire flight.

By the time we hit Taipei and the final four hours of our flight, the kids have each had a solid four or five hours of sleep. They’ve melted their brains with screens — but since I have a shoulder cramp from my own adventures in Bejeweled, I can’t really complain.

The Bejeweled truth is, I spent 10 hours on the return flight playing that stupid game.

I had to switch arms periodically when one would cramp up. My 10-year-old told me it would end at some point if I chose classic mode, and I believed him.

Through turbulence, dinner service, and multiple bathroom visits from the guy sitting next to me and completely ignoring my existence — still I played, and still it never ended.

I won't belabor your brain here, but Bejeweled probably works like other evil games: You need to make a group of similar objects so that they will disappear. It is sinister because the game gives you hints. If you think you are stuck, never fear! A jewel will shake or glisten or glimmer or whatever to draw your attention and indicate a possible move. Basically, it keeps you going, like a soap opera.

In case you wondered, my score ended up around 100,000 points, every single point scraped together from the pieces of my dignity. (OK, all told, it was more than 100K... but only because landing and taxying took forever.)

The kids are great on planes, as long as they have constant visual stimulation. This isn’t great for the state of America or Youth Today in general, but it is great for getting through a lot of hours spent in close proximity.

As for Owen and his many thoughts? They were stored up and shared over the next 10 days of confused sleeping.

Luckily, his aunt and uncle — not just his normal family — were there to indulge and listen to him.