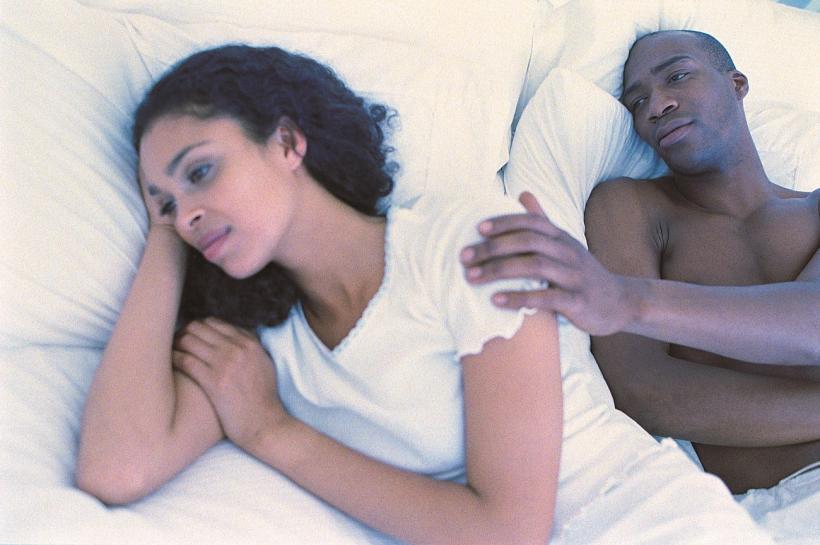 Your partner knows you need their support. But you can't bring yourself to connect, or meet their needs. Image: Thinkstock.

This article originally appeared on Mamamia.

One of the most prevailing symptoms of depression is dissociation. A detachment from real life. Like a barrier between you and the rest of the world.

This brings with it a lack of energy to connect with people, even complete everyday tasks.

“Slowed-down responses, near paralysis, psychic energy throttled back close to zero. Ultimately, the body is affected and feels sapped, drained.” — an excerpt from William Styron’s Darkness Visible: A Memoir of Madness.

Sex is not something we often hear about when talking about depression.

But we should. Because it stops.

Sex drive plummets. Interest and connectivity leaves. Problem is, this affects not only the person suffering from depression, but their partner too.

I’m a 31-year-old woman. Yesterday my boyfriend told me he doesn’t feel comfortable having sex with me. He’s very insecure and feels he ejaculates too quickly. I also think he’s depressed. I’m really trying to support him, but I’m frequently away for work. I love him deeply, but I’m on edge.

— A question for US-based psychotherapist Pamela Stephenson Connolly on The Guardian.

It's the worst sort of catch-22. Depression renders you uninterested in sex. Yet sex can help boost your mood. Even release hormones that might (temporarily at least) relieve some of the symptoms of depression.

Your partner knows you need their support. But you can't bring yourself to connect, or meet their needs. The catch-22 continues.

“The whole process of sexual arousal starts with the ability to anticipate pleasure, which is lost with depression,” Frederick Goodwin, who serves on the scientific council for the National Alliance for Research on Schizophrenia and Depression, told WebMD. “People who are depressed are locked in the moment of their suffering. The big challenge for doctors treating patients with chronic depression is that the person has been thinking about himself or herself that way for so long that it becomes a habit.”

It's not selfishness, though. It's chemical.

Depression changes the chemicals in the brain; hormones become imbalanced. These same chemicals are responsible for promoting libido, and also changing blood flow for the act of sex itself.

So how to work on your sex drive, along with your depression?

Antidepressants are a proven way to treat depression. In another cruel twist, they also have a side effect that reduces sex drive.

Goodman suggests patients work on lowering their dosage to reduce these side effects. He also explains it's common for patients to start enjoying sex more a few months after starting medication. It's a gradual process.

The overwhelming advice, however, is to talk to your partner.

You both need to understand a reduced sex drive is a normal symptom of depression. It's not a reflection of your bond or connection. Talking about it will also help reduce some of the anxiety, guilt, frustration that can arise when two sex drives are not at the same level.

“Just the having the conversation about what you want sexually reduces the negative feelings that are folded into the depression,” Russell Stambaugh a sex therapist in the U.S. told Web MD. “Arriving at the right answer to these things means working with your partner.”

Finally, know there is a solution.

Reducing the dosage level of anti-depressants (with advice from your doctor), changing to a different medication, working with a psychologist to improve mental wellness as a whole, will all go lengths in bringing you back to yourself, your body and, in this, your partner.

If you like this article, please share it! Your clicks keep us alive!
Tags
mamamia
Depression
sex drive
antidepressants
Stigma
Sex
arousal
communication