Why Trump’s Inauguration Is Personal For Some People With Disabilities 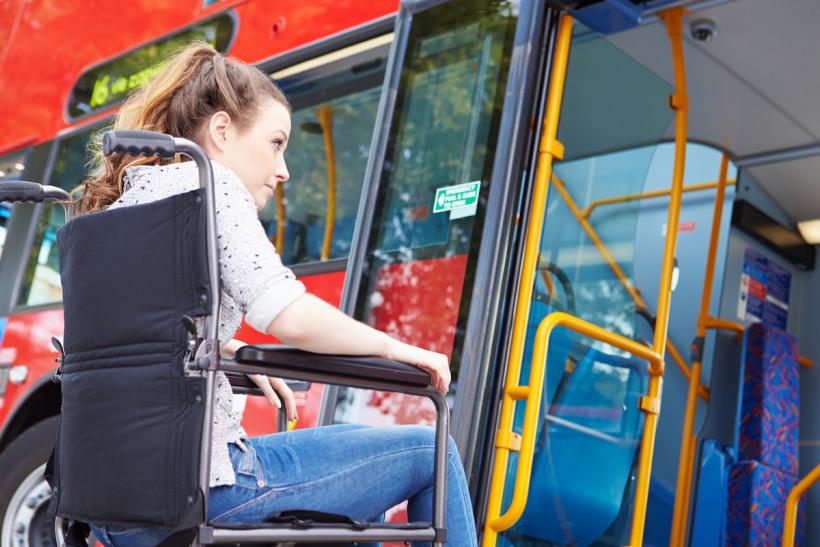 As the days between now and Donald Trump’s inauguration day dwindle to nonexistence, I've started to worry — a lot. I feel like the five stages of grief have ballooned to nine. The usual suspects like bargaining and denial have been joined by uncontrollable tears while watching the news, screaming at Facebook, stress eating, and angry middle finger emoji-laden text messages.

Why all the fear? Why all this twisting anxiety because of something that’s a done deal? To the man taking the wheel in this country: as a person with a disability, I feel like I’m nothing and THAT terrifies me.

He’s never truly discussed people with disabilities as a priority or concern, and some of his grand plans and appointments could indeed counteract progress. Example: The pending Health and Human Services Chair Tom Price has a record of slashing Medicare benefits.

Even if his “smart business tactics” that he brags about save the country trillions, building the deficit up and proving half the country wrong, it’s highly unlikely that money will trickle down to me or the programs I rely on.

I know, I know. People will read this and deem it an overreaction, saying, “Don’t take it all so personally.”

As a woman with a disability, it is very personal.

Every time a pundit, relative, or distant acquaintance via Facebook discusses the wastefulness of social programs, I tend to have to hold in my rage. It’s impossible to remain even-keeled and indifferent when the government keeps me alive and independent.

Those silly social programs, specifically for people with disabilities, have made sure I had money to live on at times when I couldn't physically keep a full-time job. There are programs have paid for personal care attendants, so I could move out of my parent’s house and attend college like my peers.

They have helped me afford modifications for my vehicle to allow me to drive and independently commute to work, the expense of which is more than 3x a conventional car. Without Medicare, my bill, just for respiratory services, would be $1,800 a month (and that’s on the low end). So yes, I am for social programs and government assistance.

Having a disability is pricey, and if not for the intervention on a state and federal level, I could have been forced to live in an assisted living facility at several junctures. I could be 34 and in a nursing home. That’s a reality for many people in situations similar to mine, so yes it’s personal.

Maybe it’s not so personal to you. Maybe you don't know anyone with a disability, which seems unlikely because we make up 20% of the country. In fact, people with disabilities are one of the largest minority groups and one that gets easily overlooked. We're a big deal, just maybe not always to the people who will be in charge by week’s end.

When you hear “Trump” and “disability” in the same sentence, people think the argument is solely related to “reporter-gate!”

You know, that now infamous, and hugely demeaning impression Ol’ Trumpy did of Serge F. Kovaleski, who despite being a New York Times journalist whose contributions led to a Pulitzer Prize winning story will forever be the "reporter with a disability mocked by Trump." That's his legacy now.

Sure, that event spoke volumes about Trump’s emotional intelligence, proving he had the maturity of a 5th-grade bus bully or a guy that trolls Reddit threads. Though he’s not exactly the ideal representation of what the leader of the free world should behave like, my fear burrows much deeper. (The fact that half the country signed off on and defended all of that terrible behavior is more troubling.)

Unfortunately, though, just being tacky is not the only way he could potentially screw over my fellow humans with disabilities.

His decisions for Supreme Court appointments and cabinet leaders are important. His cuts will matter. They are potentially going to change the lives of individuals and families that have unique needs due to disability. Though I can’t speak for everyone, there is unrest among my peers.

I raised the question in various disability circles recently and heard some very real legitimate fears voiced by the people in this huge (but not silent) minority.

“It's clear he's out of touch with the reality of disability, so I fear quality of life will suffer when he slashes government assistance/healthcare on which so many of us depend.”

“The new attorney general’s lack of understanding about inclusive education threatens my child with Down syndrome and her ability to progress and learn with her peers. This could cause irreversible progress for her and people like her trying to assimilate into the world and live a life that meets her potential.”

“I am afraid that Medicare and Medicaid will receive cuts that will not only jeopardize my independence but my health (life).”

“I am scared of the hate that people with disabilities will face, whether blatantly or subtly.”

“I fear that a man who sees physical weakness as cause for derision and disgust will view people like my son as ‘losers’ who are undeserving of assistance and support systems.”

Voting is an intimate process. In November, we stood (or sat) in a private cocoon. Closed our eyes and imagined a future we wanted to see and made a choice. That’s as personal as you can get, and personally, I am afraid…and I am not alone.

For my own benefit and those that live similar realities, I hope these fears are unfounded. No one would be happier to be wrong than me.

If you like this article, please share it! Your clicks keep us alive!
Tags
Election
Trump
inauguration
voting
disability