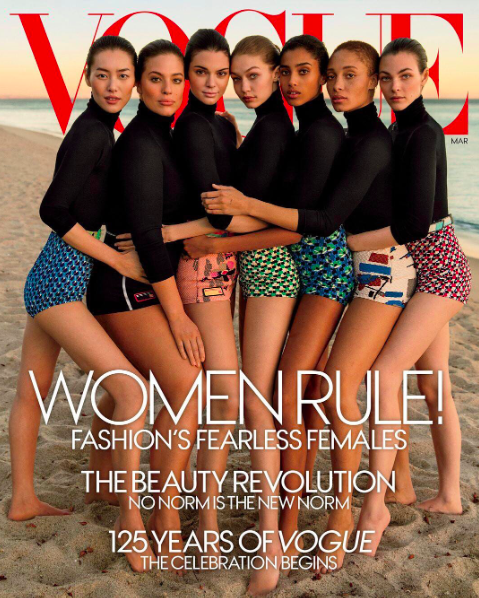 The March 2017 cover of Vogue. (Image via Instagram/ voguemagazine)

Hiiiiii people! These issues aren’t going away. And neither am I. So scroll on by if it bothers you.

Is there any particular reason that Teen Vogue is consistently being lauded for excellent journalism and a fresh outlook while Vogue —not so much? I think Vogue’s video series is top notch and quietly humorous, and I love the Vogue Runway app and use it to unwind to every night during every fashion week. But Vogue, the magazine, needs work. According to Huffington Post, the images for Vogue’s March 2017 issue (which was supposed to focus on multiracial, body-positivity) were leaked, and what a surprise indeed! There’s yellow face. Model Karlie Kloss (who has since apologized for the offensive shoot — though I’m shocked she didn’t know better) is featured in the magazine dressed as a geisha and doing a variety of weird tasks.

The culture of another country being used as a backdrop for a white woman is SO problematic in so many different ways. I have many questions. Would it have been so hard for Vogue to find a Japanese model for the shoot? Why is it necessary to have a white woman pose as Japanese? Interestingly enough, before I even knew of this massive faux pas on Vogue’s part, I dreamt about yellow face last night. In my dream, I was telling someone about how the iconic film Breakfast At Tiffany’s made my sisters and I squirm with discomfort. We watched the film as children and recognized that Mickey Rooney’s character was NOT cute or funny. I wonder how many other nonminority children picked up on the not-so-subtle racism taking place at that moment. It has become ever present to me that some people simply don’t understand that systems of oppression stay in place because of actions like Vogue putting forth a white woman dressed as an Asian woman, for a “diversity” issue.

Sure. It may seem harmless, but the erasure of Asian culture in fashion and beauty adds up to some large scale problems in our society and how the world treats Asians.

When I was a child, I remember racist Asian jokes circulating my classroom, and not registering how it would hurt if someone swapped the Asian butt-of-the-joke for a black butt-of-the-joke. I hang my head in shame for not speaking up, despite being only a child.

But that’s how microaggressions work. On a large scale, they desensitize us as a society, so that further aggressions can take place and we turn a blind eye to it. In the Facebook comments of that piece I wrote about cultural appropriation, it became crystal clear to me that if many didn’t understand cultural appropriation, then explaining yellow face was going to be a real hurdle. Why is yellow face wrong? It excludes Asians from mainstream spaces as our society has done historically for many years. Name a top Japanese model. Oh, you can’t? Right, because they’re not given space — not even in the “diversity” issues of major fashion magazines. This could have been Vogue’s opportunity to break the mold and make space for an Asian model to do an amazing spread that everyone could be proud of. Instead, they chose to do the one thing that everyone’s supposed to know not to do, by now.

Now let’s talk about Betsy DeVos because the world is a hot garbage fire of problematic nonsense right now. A conservative cartoonist decided to try and be cute, and draw Betsy DeVos being blocked from entering a school, mimicking the famous Norman Rockwell painting of Ruby Bridges being denied entry into a newly integrated school.

It was not cute. Holy false equivalence, Batman.

There is so much problematic nonsense to unpack here, that I don’t know where to get started. When I first saw this image, it just made me want to take a nap because I’m so tired of this type of bullshit. Comparing a very privileged white lady (who might I add has never attended a single public school) to a famous image used to illustrate the importance of the Civil Rights movement is disgusting. It is a subtle attempt at erasing a key point in the Civil Rights Era and the destruction of Jim Crow laws.

Protests against DeVos and desegregation are not and will never be the same thing.

In the background of the Ruby painting, there are racial slurs sprayed upon the wall. In the background of DeVos, the world “conservative” is written. Gasp! I didn’t realize that conservatives have a 300+ year history of oppression of all types. Glad there was a memo about this. Let’s revise the history books! (I’m joking, but with this administration, I’m probably on to something here).

To quote Charles Pulliam-Moore: “McCoy’s cartoon appears to compare DeVos being put through her paces as being just as traumatic and terrible an experience as being a young black girl living in the 1960s South, one who was literally attacked for attempting to get the education that the Supreme Court ruled was her Constitutional right.”

And that friends, is a false equivalency.

On a small note, does anyone besides me think that it’s really weird to compare an adult rich lady who works for the President to a small black child who lived in Civil Rights era? Even if Betsy DeVos is okay with images that slyly rewrite the history of America with such inaccuracies, she should at least feel a little weird about how this image has infantized her by attempting to draw her as itty bitty and weak. It speaks to the odd side of white fragility, which often hints at the idea that white women need more protection from the world than anyone else. It gives me the absolute creeps, to be honest.

Enjoying other people’s culture doesn’t mean washing over said culture with whiteness. In order to grow as a society, this must stop. So let it start with us.