I'm Terrible At All The Exercise, But I Keep Doing It Anyway 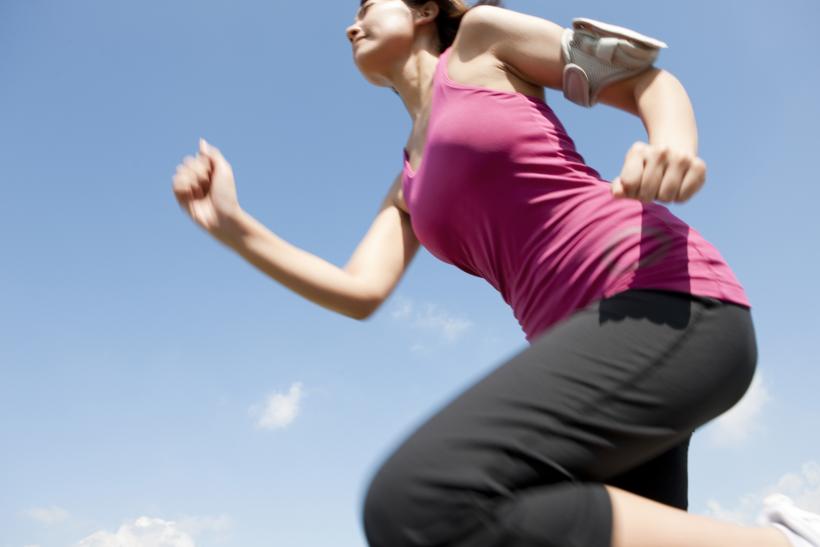 Exercise is about feeling empowered and healthy, not setting records or meeting #bodygoals.

I have always been bad at sports. My ability to run fast was thwarted early by undiagnosed asthma. Soccer balls and me? Let’s say I spend more time face-down in the grass than chasing balls down to the goal. In high school and standing 5'9" by ninth grade, people mistakenly thought I was on the basketball team. Perhaps the star!

Um, no. But I was on the varsity gymnastics team, despite abysmal excuses for tumbling. While gymnastics is often the realm of the under 5’5" set, I still competed on the floor and beam, usually falling several times, for all four years. (Our school had a low bar to get onto the team.)

At the same time, my home-life was also unsuccessful. My father was physically and emotionally abusive, I was neglected, and the police often visited our apartment after neighbors complained about the screaming. Being a part of a competitive team, one that worked out every day, saved my life. And no matter how poorly I performed, my teammates laughed at my jokes, supported my routines, helped preserve my sanity. The gym itself became a refuge.

Now, in my thirties, I run, practice yoga, and take spin classes. My spin classes offer statistics and I am frequently in the bottom third of the class. I have run a few half-marathons and though I insist on not stopping, I still do just okay time-wise, often chasing down the backsides of other runners.

In the tempestuous throes of my daughter’s early life, she didn’t stop crying. Neither did I. Her colic, according to the pediatrician, was some of the worst she’d seen. And I cried and begged for my husband to not leave for work each morning. I clawed at my own hair and face in frustration. I moaned and laid prostrate on the kitchen floor. And then, one day, I left the house (my child was being watched).

For myself. For a run. It was a short run, heavy and slow. But still, the sunshine was invigorating. I felt human again.

Then I decided to try Crossfit, the supposed extreme sport of choice these days. I don’t know what I was thinking, as this went against everything I believed in. I want kudos for showing up to a class (a la yoga) and I don’t like getting yelled at. But somehow, I found a Crossfit gym that was a warm and inviting environment. During each class’s set routine, I was almost always the last or second to last in any competitive exercise. AND I KEPT DOING IT. In the first year of my daughter's life, this outlet was critical for me. Just leaving the house allowed me to maintain a bit of my self, and by extension, be a better mother.

I jumped those box jumps as hard as I could. I walked out the door, walked the 400 meters and came back to the gym slowly. The next class was already setting up. But my classmates were still there. Waiting for me. And I still got my exercise.

“It’s okay. You’re doing great,” Jared, the Crossfit coach, told me. The heat in my face was akin to the fires in hell, I was sure. My heart was saying “fuck you fuck you good job fuck you.”

In the gym, I was the last one. I still had to go back out of the gym, run 400 meters, and then do several more box jumps — two more times. Everyone else was done; they had completed the required rounds and were sitting on the black rubberized floors heaving their breaths and watching me. The red numbers on the countdown clock still ran — so, so fast.

“I just don’t know if I can do it,” I breathed as I stepped up onto the box; jumps were out of the question at this point.

“You can,” the coach said. And then I heard the heavy panting of my fellow gym-mates be replaced by cheers.

“You got this!” one kind woman named Ashley hollered. (I will always be grateful for her enthusiasm toward and against my ineptitude.)

Okay, this sounds absurd — cheerleading in the cheesiest way. But, I tell you, it worked. Kind of. I finished my box “jumps,” which had become step-ups. I turned around and jogged out the giant garage door into the misting rain. I trod over downed leaves and past children on a playground. I slowed to a walk as I made the turnaround.

The gravel walkway that led to the gym was like quicksand. The music poured out of the gym and in I padded, feet heavy as iron. They all stood in a line. Pumping and cheering. I could not go on. I told the coach so. He whispered that I could have this one be the last. He was offering me a cheat. A way out. A way to save face. I wanted desperately to thank him. Collapse. Rest.

But, fuck that. I jumped those box jumps as hard as I could. I walked out the door, walked the 400 meters and came back to the gym slowly. The next class was already setting up. But my classmates were still there. Waiting for me. And I still got my exercise. I felt solid as fuck.

We are frequently told, by the medical profession and by the media, that exercise is critical for a healthy life. There are posters of women holding an apple with glistening tight muscles and white-as-pearls teeth. Typically, the people publishing the memoirs are about those who excelled at their exercise or sport. Local newspapers report on the players who racked up the most points or beat a state record on a running race. Cyclists on trails scoff at the slower bike rider.

As we age, we become more reticent to participate in sports. Our bodies become less limber. This is compounded because we don’t stretch our bodies regularly. It’s often because we fear mediocrity, or plain out worry about being terrible at it.

Embrace it! Mentally, it can be tough when we don’t measure up. But take that yardstick, crack it over your knee (or try and then just drop it at your feet) and go out there. Being the best you is highly valuable. At the end of the day, in your bed, aching or soaring from endorphins, it does not matter what the person next to you on the track did. Your health does not depend on anyone else. Their statistics are not yours. Their body is not yours.

I am getting exercise. I am still enjoying the time when I work with my body. I am learning — about the physics of my body and about other people. Let’s call them my “teammates.”

Sometimes I do mentally struggle with running a slow time or tying myself up in a yoga asana that everyone else seems to have no problem with. I don't need written or tangible goals (i.e., get a sub-2 hour half marathon or do a free-standing handstand by year's end) for exercise to save my life. I don’t have defined abs.

But when you say “body definition,” you know what I hear?

"Body: noun. a vessel for which to live."

If you like this article, please share it! Your clicks keep us alive!
Tags
exercise
health
physical wellness
mental health
CrossFit
empowerment