What Does Mike Pence Have To Do With Prom Shaming? 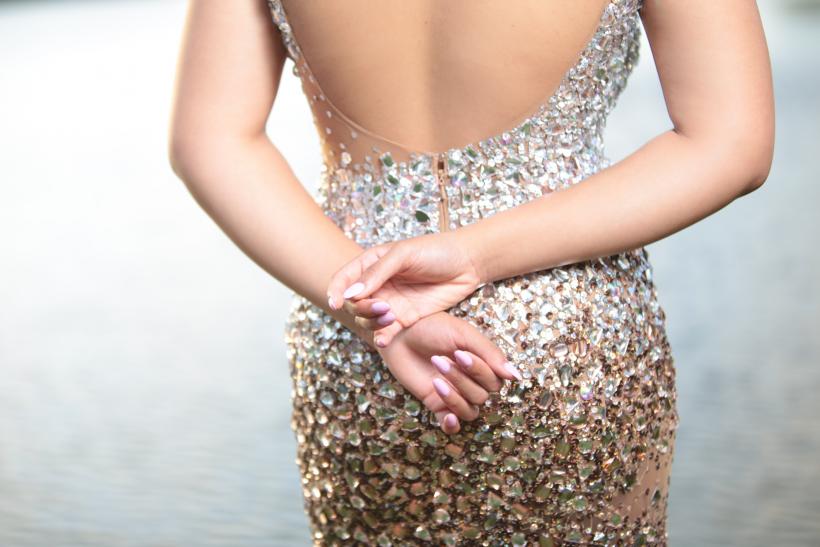 The internet has been ablaze recently with pieces explaining why Mike Pence’s proclamation that he won’t be alone with a woman who is not his wife is supremely messed up. We’ve been pointing out that his policy treats women and men blatantly differently, keeps women from being in positions of power and having access (even if he could find a qualified woman who was willing be his chief of staff, his rule would preclude him from hiring someone who needed to work with him so closely. But perhaps worst of all, it means that rather than seeing women as colleagues, or people with something to offer, or people at all, Mike Pence thinks of women as nothing more than temptations to be avoided. And that’s misogynist AF.

Which brings us (er, naturally) to prom dress codes. It’s prom season which means expensive dresses, hair appointments, weepy parents, and young women being treated like some combination of a toddler and a dog. The example we'll look at today is Stanton College Preparatory School in Jacksonville, Florida.

Someone there thought it was a good idea to put up four signs with four different dresses. Each sign says at the top “Going to the Stanton Prom?” On the picture of the “dress code approved dress," they had typed: “YES YOU ARE. GOOD GIRL.”

Not only did the posters treat the young women as if they are pets (seriously: “good girl”?), but they were also, as student Lily pointed out on Twitter, put up long after the students would have purchased their dresses. 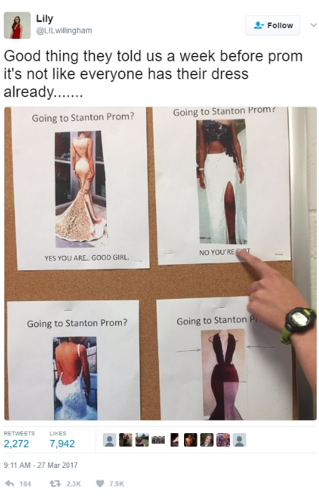 But scratch the surface of this just a little, and you’ll uncover the Mike Pence connection. These dress codes treat girls like walking temptations.

When these dress codes are imposed during school hours, there are a couple of different explanations that are typically given. I want to note that these explanations are almost always built on a gender binary, leaving out trans and nonbinary students completely.

The first is the idea that they help create a “distraction free” learning environment (which reminds me of Toby’s line in The West Wing: “Show the average American teenage male a lug wrench, and his mind will turn to thoughts of lust.”) In this explanation, it is suggested that girls' clothing choices should be controlled, restricted, and policed for the benefit of boys in class.

But mostly, it’s patently ridiculous to suggest that dressing business casual is something that requires practice and preparation. Plenty of students have jobs that require them to wear uniforms, and they don’t become confused and wear their varsity soccer uniform to their job at Krispy Kreme.

This is based on the suggestion that rather than boys being responsible for their own behavior, girls are somehow responsible for whether or not their male classmates are focused in biology class. (Hint: They are not.)

There’s also the idea that somehow dress codes “prepare” students for life in the “real world.” This theory has some holes — like the fact that many jobs don’t have a dress code, and that these school dress codes are almost always focused on female students (either specifically or by focusing on clothing that is worn almost exclusively by girls and women).

But mostly, it’s patently ridiculous to suggest that dressing business casual is something that requires practice and preparation. Plenty of students have jobs that require them to wear uniforms, and they don’t become confused and wear their varsity soccer uniform to their job at Krispy Kreme.

Let’s talk about what the pictures tell us: It’s OK for girls to have bare arms and wear skin-tight dresses (with long, full trains that will trip everyone on the dance floor). But, it’s not OK for girls to show their abdomens, thighs, or backs unless they are covered by a thin piece of fabric? Hmm.

Let’s talk about how arbitrary this is: This school's boys and girls swim teams managed to hang out together wearing significantly less clothing than is allowed based on the prom dress code posters. Hmm.

Also, it looks like the cheerleaders’ uniforms (with their short skirts and low backs) wouldn’t make the prom cut. Hmm. 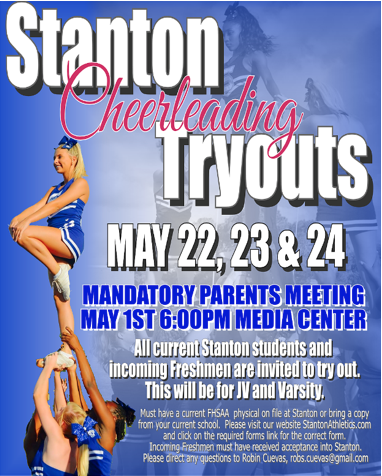 These dress codes do become a system for arbitrary policing of student’s clothing and adults sexualizing girls in the service of… what? Trying to keep boys from sexualizing them?

But also, these dress codes become a conduit for fat shaming. Not to mention that gendered dress codes make it even more difficult for trans and non-binary students.

How about instead of trying to control how girls and young women dress, students of all genders are taught to be empowered around their sexuality and sexual choices, to fully understand consent, and to respect each other whether they are wearing swimsuits, cheerleading uniforms, prom dresses or footie pajamas? And how about instead of reinforcing the bullshit idea that students can prevent sexual assault and harassment by dressing a certain way, schools focus on preventing sexual violence, punishing the perpetrators, and preventing recidivism? That would actually do some good.

If you like this article, please share it! Your clicks keep us alive!
Tags
prom
dress code
prom-shaming
mike pence
feminism
misogyny