The Problem With Calculating Salaries For Stay-At-Home Moms 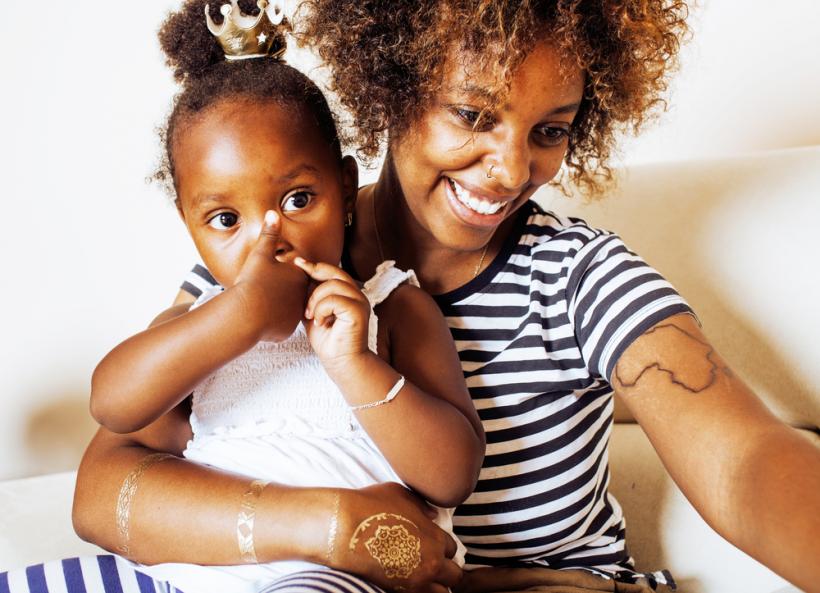 The whole concept of salaries for stay-at-home moms reveals both the classism in parenting culture and what we really think about poor people.

It’s no secret that stay-at-home moms work constantly. Caring for children is hard work, as is keeping a household together and running smoothly, and for families with a stay at home parent, most of that work often falls on the shoulders of one person. While any parent can be a stay at home parent, crappy gender norms mean that stay at home parents are most often moms rather than dads (there’s almost no data on stay-at-home parents who happen to be trans or nonbinary). Given the crushing workload stay-at-home moms (or SAHMs) deal with regularly, and the fact that capitalism devalues work without a dollar value, some folks want to assign a numerical value to the work these moms do. The idea here is that if we quanitfy what a mother (or other parent) would be making if the labor of parenting were paid labor, then we can show how valuable it actually is. The problem is when we rely on how significant the number is to show how important the work is, we run into all of our classist assumptions.

In fact, the whole concept of the “SAHM Salary” reveals both the classism in parenting culture and what we really think about poor people.

At first glance, the SAHM Salary seems almost directly related to the Wages for Housework movement of the 1970s. The two have a lot in common; both are focused on work that has traditionally been coded as feminine, and both use the idea of such work being economically valuable to showcase inequality. However, there are a few clear differences. The Wages for Housework movement included childcare, and rather than using “if this were paid labor you’d be making a ton of money” to comfort exhausted women, they encouraged women to demand wages. At its heart, Wages for Housework was always about upending capitalism, rather than adhering to it, and the movement was complex and included criticizing mainstream feminism. In contrast, the STAHM Salary feels like a quick thought experiment.

I am not myself a stay-at-home mom, but my parenting journey has included taking on a lot of the work typically reserved for them. At times, I’ve probably been seen by the people in my life as a SAHM. I’m a transgender man with a three-year-old, but I wasn’t yet out as transgender when my child was born, and for the first six months of his life I didn’t work, instead devoting my days to caring for him and our family. I gradually have incorporated more paying work into my life since then, but I share childcare labor with my spouse, and the amount of paid labor I do, ebbs and flows. At one point, I even tried to reclaim the term “housewife,” which is funny in retrospect.

Because of my parenting history, I was curious about the “Mom Salary Wizard,” created by Salary.com.

It’s pretty easy to use, you fill out how many hours you estimate you do certain kinds of work, and then it sends you a picture of a fake check with the words “If we could, we would pay MOM…” and whatever salary it decided you should be earning. True to the double standards of parenting, there’s a version for dads too, but because these are based on real data it assumes that even stay-at-home dads are doing a whole lot less of the working of parenting. Like almost everything in the parenting world, both wizards seem to run on the assumption that you are cisgender, heterosexual, and married. Given my circumstances, I chose the mom option and received a fake check for $129,122.

To put that in perspective, I once held a job at a not-for-profit that paid me just over $20,000 a year, but that’s the most I’ve ever made. I’m a working class person without a full college education who has mostly worked service jobs, living in a state where the median household income (presumably often made up of two combined incomes) was $52,492 in 2016. Yet, the calculator seemed to be telling me I should be getting paid like a CEO.

I guess that’s the point, and it’s also just a function of how it’s calculated. The wizard assigns an hourly rate to different types of “jobs”  you do as a stay-at-home parent and then assigns them an hourly rate based on real salary data. It tells you, for example, that the “typical” STAHM spend 3.2 hours a week doing the work of a chief executive officer, and then assigns the pay rate of $55.42 an hour. For that one job alone, a typical SAHM would make $9,199.72.

The problem, of course, is that working class people all over the country are doing work that is both difficult and important, and they are doing it for much much less. The federal minimum wage is still only $7.25, and many people are struggling to make ends meet and even raise a family on those meager paychecks. As a working class person, staring at the number for what I “should” be making for my parenting labor didn’t make me feel good. It didn’t make me think: See! I’m just as valuable as a CEO!

Working class people already know that we are valuable; the world wouldn’t run without us and exploiting our labor is big business.

Instead, it made me feel sad and angry that no matter how valuable our work is, my family will never see that kind of money.

So who are we really talking to when we talk about the idea of the SAHM Salary? I think the problem is almost everything that is written about and for parents (and especially mothers) is geared towards middle and upper-middle-class people. There is an assumption that you are comfortable, that’s why instead of demanding wages for all of this unpaid labor you are just supposed to feel good about a significant imaginary number.

The email with my imaginary salary came with the following text:

“Even though we all know a mother's work is priceless, this check represents what you would make if you were paid a salary for all of the jobs in your busy day. So while we wish we could send every mom a six-figure check in real life, we hope this serves as a reminder of all the hard work you do throughout the year.”

I don’t know a single poor person who needs a reminder of all of the hard work they do.

What we do need is enough money to live on, and that’s something no feel-good campaign can provide.

If you like this article, please share it! Your clicks keep us alive!
Tags
Calculating Salaries
Stay-At-Home Moms
SAHM
moms
motherhood