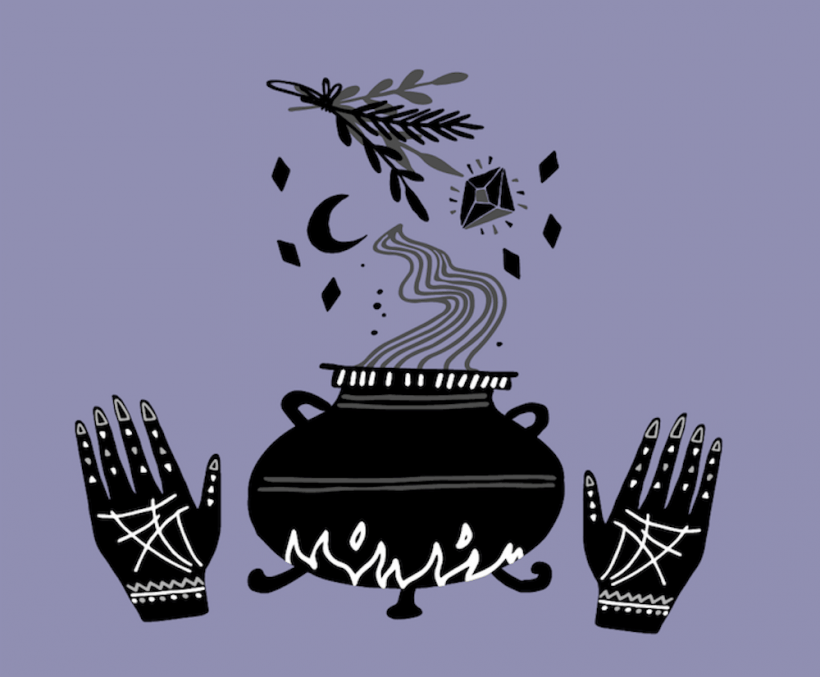 My witchery is hood. I don't have an expensively decorated, Instagram-ready altar; I don't worship some appropriated feminine divinity or semi-European Paganism. When I talk about being a witch, my spirituality, or any combination thereof, I'm not talking dark aesthetics or visual trappings of occultism. My witchcraft is carved out of a history rife with appropriation, misrepresentation, and invisibility. I am the witch I've made myself.

I belong to no single tradition. I am drawn to the Afro diaspora as well as some other deities from Odin to Inanna. My personality wants darkness and a syncretic array of deities to talk to. The divine beings I speak to tend to be associated with Death, darkness, scary things. All things suited to an ill-tempered aging Goth. I often refer to myself as the Creepy Little Weirdo friend. For me, a divinity that is too scrubbed and too focused on aggressive positive culture leaves me cold.

In this the year of terrible everything, I've found the aggressive positivity mixed with spiritual gentrification and appropriation to be particularly grating. I keep seeing images that mix dream catchers as jewelry with Buddhas, the triple goddess and whitewashed images of the Loas as European featuring light-skinned Barbie dolls, and it has brought me to come out of the closet, so to speak, as someone who hates all of those things.

I have self-identified as a witch for more than twenty years. I spent a lot of my time studying many books, learning how to close a circle, how to do candle magic; I used an athame blessed by a local witch.

My practice was serious, and yet, as satisfying as it was to leave behind Christianity, I still felt invisible.

My connections to African Diasporic spirituality growing up were almost non-existent. I had an unnamed yearning, but when I reached out to try and satisfy that need: nothing. This was a long time ago, and I should mention that my internet use was mainly book lover bulletin boards. I had no google machine, and my ability to find books that weren't colonialist crap or racist crap or otherwise inaccurate crap was severely limited.

When I found information on Voodoo, Santeria, or rootwork type magic, it was never as detailed or loving as something about the Morrigan. I didn't hear or see the word Yoruba until I was in my twenties. When I did see any representations of myself, it was always evil. It was the witch doctor with a painted face, cursing some poor White person. In film, there was always menace and danger, wild topless Black women covered in blood, gyrating and ululating in the bayou to the horror of some good White folks.

I clung to the few and far between bits of magical Blackness I could find, but I did not incorporate them into my practice because of those European rules so many of us witches know well — the idea that darkness = badness.

Most Afro-diasporic magical traditions have traditionally been shown as creepy and evil, and not in a fun way.  I wanted to learn, but I had no access to a Baba or folk magic Auntie.

As I got older, I gave up my spirituality for a while. The overwhelming Whiteness of all things witch-related broke my spirit. It took me a long time to return to my pantheism, and in the last few years I've found comfort in it — and yet, there was still something huge missing and something that made me feel out of place. In the witch-related spaces I tried to belong to, I felt othered and unwelcome.

I will not be shamed or peer pressured into the White light of White witchcraft. I will not be held in the sunshine when what I need is moonlight. I will stand in literal and figurative Blackness because it is in my skin, in my blood, and where I feel most at home.

It took searching blog after witch blog and finding nothing to relate to for me to understand fully what I needed. Aesthetic darkness, as much as my wee little goth heart loves it, is empty for me. I realized that even in these supposed darker corners of magical life, I was not there. What about me caused this rift? Why did I feel so incomplete in my practice?

I made peace with the syncretic nature of my spirituality. I embraced my relationship with Odin in his All-Father Mad Ecstatic Poet self, I dream about and talk to Baron Samedi, I carry a blood-red pouch full of crystals and other talismans, I talk to my dead and other folks' dead, and when I'm afraid I think about Valhalla and Anubis. I have found my magical groove.

Last year, I don't recall what prompted it, but I posted somewhere on my social media that I was cursing an individual to poop their pants in public while wearing white pants. Some of my witchy friends were appalled. Some questioned how I could power said curse, and I had to think about it. And then as I was doing some candle work, I realized what I was missing in the witchy community and the general talk about all things woo.

I was missing myself. I am sometimes an aggressive person; sometimes I am tempted towards violence, I say bad words, often I have a bad attitude, I have a dark sense of humor. I am not super posi. I am made of many of the things warned against in the watery European traditions most closely associated with magic and witchcraft.

I don't want all sunshine. I don't want all light and a banishment of the gritty and the grimy — because that is not who I am. Above all else, spirituality for me is about who I am as a whole person, not only the happy parts. I don't want to rely on traditions that exclude me.

My essential witchness must honor all of me or none of me. I will no longer allow the positive Whiteness of witchy culture and magic to impinge upon my ability to do the work the way that feels right to me. That means, sometimes I gotta lay a curse. Sometimes, I have to avoid reading witch-related media. I will never again rely on Whitewashed caricatures of the divine beings I have relationships with.

I will not be shamed or peer pressured into the White light of White witchcraft. I will not be held in the sunshine when what I need is moonlight. I will stand in literal and figurative Blackness because it is in my skin, in my blood, and where I feel most at home. I will reach back and get what I need from the ancestors who remained unbroken and unassimilated.

This is what witchcraft means to me.