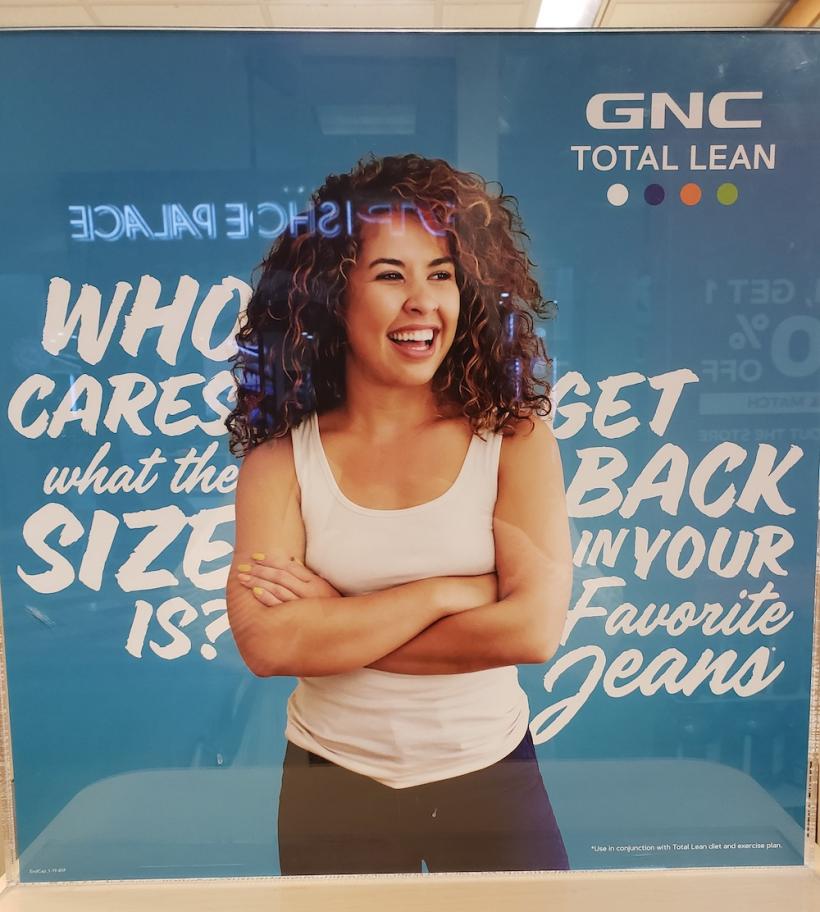 I was bouncily heading into the mall to meet a friend for a lipstick and perfume play date at Sephora, when an ad caught my eye. It was just inside of GNC.

It was a simple image — a smiling woman in jeans against a blue backdrop with text that began: “Who cares what the size is...?” There was more, but my feet were taking me to makeup faster than I could finish reading.

My brain registered that I needed to have a feminist moment with this text. So I did an actual break and reverse into ye olde General Nutrition Center. I hadn’t stepped foot inside a GNC since I was a child procuring vitamins with my grandfather, a former bodybuilder who had a daily weight training regimen well into his sixties. The sales person asked me if I needed help with anything and I chirped a quick “nope” as I pulled out my phone and took a picture.

The full text reads: “Who cares what the size is? Get back in your favorite jeans.” It was advertising GNC’s “Total Lean,” a line of meal replacement shakes and bars that accompany a weight-loss program. In the rhetorical question that the ad presented, I saw the ripple effect of body justice, fat activism and body positivity (BoPo). I heard the rallying cries from my early introduction to fat activism: “Health at every size!” and “Every body is a good body!”

How had a fat feminist idea — like not caring about the size of your jeans — make it to the aisles of GNC?

I had just seen a similar stab at faux weight-neutrality in the news.

Recently Weight Watchers rebranded as a wellness-focused company. The new move toward just “WW” is about becoming “the world’s partner in wellness,” said president and CEO Mindy Grossman. “No matter what your goal is — to lose weight, eat healthier, move more, develop a positive mindset, or all of the above — we will deliver science-based solutions that fit into people’s lives.”The rebrand includes several new features, including a focus on mindfulness, rewards for tracking weight and meals, and a new line of food products that have no artificial sweeteners, flavors, colors or preservatives.

This question lives at the heart of what I’m going to call “BoPo-washing.” BoPo-washing is the new paradigm of companies using weight-neutral or body positive language in order to peddle products.

While digging into bottomless breadsticks at Olive Garden post-Sephora, I postulated on WW’s and GNC’s strategy with my friend.

We are in the midst of an important civil rights moment focused on ending fat discrimination and weight-based bigotry. There’s a growing number of books, films, activists, university courses and professionals focused on changing the conversation around food, body size, fashion and plus size representation. For many, these things have changed hearts and minds, pushing us to reconsider how we think of our bodies and the bodies of others. For the weight-loss industry, however, these things have done little more than signal that it’s become passe to overtly sell products meant to promote weight-loss. The keyword here is “overtly.” Let’s talk more about that.

The rebranding of WW and Total Lean’s shift in brand messaging signals that we’re witnessing an important cultural phenomenon - when a form of bigotry (in this case, fatphobia) goes from overt to covert. This process happens when any justice or civil rights movement hits a tipping point and becomes visible on a grand scale. In the past fifty years we have seen this process take place with a number of marginalized identities, but I’d like to talk about what happened when a resurgence of feminism in the 1960s and 1970s began demanding gender equality for women.

Before Trump and #MeToo, we had entire swaths of the population who denied that sexism was a real problem in our country anymore. Why? Because how we publicly talked about women as a culture had changed a lot, but how we felt about women as a culture hadn’t. Feminists fought for the idea that women were not inferior to men and should be seen and treated as equals. In the same way that fat activists fight for the idea that fat people are not inferior to thin people and should be seen and treated as equals. While many people took to changing how they thought about women, many others only changed how they spoke about women in public. They knew they faced censure from their bosses or disparaging looks from acquaintances. So, they changed how they spoke, but not how they felt or thought.

Further, these forms of oppression and stigma go much deeper than they appear. Sexism isn’t just about gender.

In the same way that fatphobia isn’t just about body size. It’s connected to the cultural commitment to hierarchy of all kinds. We cannot get rid of sexism or fatphobia without seriously taking stock of the matrix that has allowed them to thrive for so long. It’s safe to say that most people feel they have a lot to lose if we start following the breadcrumbs back to the heart of these kinds of problems. The truth is that it’s very hard to fix a big problem, and many people are committed to not fixing things no matter how much others are suffering because they believe they benefit from the way things are (in some cases, they are correct).

Fatphobia has deep roots in core American values — like conformity (the idea that people should act the same and believe the same things and that people who don’t do that are bad) and bootstrapping (the idea that anyone can pull themselves up by their bootstraps, and if someone doesn’t have something — like a thin body — it’s because they didn’t try hard enough and therefore deserve no compassion).

The language shift that WW and GNC are undertaking acts as the canary in the coal mine. This shift is not signaling the end of dieting. It’s signaling a growing chasm between how we talk about fat bodies and how we still feel about fat bodies in this culture.

So when GNC rhetorically asks “who cares what the size is?” they’re parroting a core tenet of fat activism and body justice — the tenet of weight neutrality. The idea behind weight neutrality is that we can more effectively promote justice and wellness when we stop trying to control our weight and stop using weight as an indicator of morality, attractiveness or health. It is therefore misleading to use a weight-neutral sentiment in order to sell a product or service designed to promote weight-loss. True weight neutrality would mean Weight Watchers - and, yes, WW - closing its doors forever. It would mean the end of Total Lean. It would mean the end of a lot of things that we have come to understand as normal parts of everyday life - like fat shaming, food policing, weight challenges, and a system of values that rewards people for being thin. Until that end comes, I think it’s safe to say that weight loss companies will churn out more double-speak advertising and rebrands that their CEO can’t even explain .

And I’ll be here encouraging you not to fall for it.