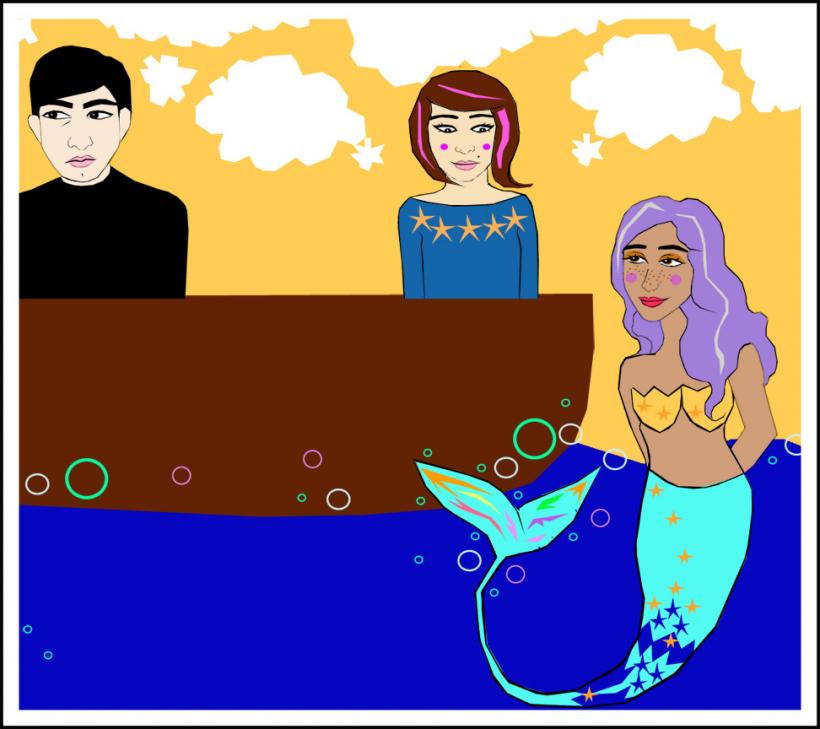 I feel like I need to explore my sexuality because I haven't felt sexually attracted to men for a while. (Artwork: Tess Emily Rodriguez)

I recently got back together with my ex-boyfriend, who has also been my best friend for a very long time. Last time we were dating, I broke up with him because I was questioning my sexuality (which I didn't tell him), and I came out as bisexual to some of my other closest friends (not my boyfriend).

He and I got back together about a month ago, and I was the one who initiated the relationship. I don't know why I did it. I really do like him, but I think it may have just been an excuse for me not to have to face the reality of my sexuality.

One of my friends is also bisexual, and I have been talking to her a lot about coming to terms with this. We were driving home about a week ago, and I realized that I like her. I've liked her since I met her over the summer. I don't think she likes me, though, because she has other relationship stuff going on — but I still like her.

I know that this seems very odd and is an awkward situation, but do you have any advice for my dilemma?

Oh, my dear, this may feel awkward — but your situation is not all that odd. I’ve had many friends who were in similar situations as they were coming to terms with their sexuality.

Don’t feel guilty about your sexuality and the confusion you’ve had around it.

From what I have known, that is a regular part of the process. And yes, you got back together with him (probably subconsciously) because you were afraid of facing the implications of your sexuality.

You need to break up with him, as soon as possible. It’s not fair to him or you to pretend that you’re in this when you’re really not; you’re just biding your time. You mentioned that you were afraid of ruining your entire relationship, but prolonging this is going to do far more damage. He might not be ready to be your friend now (or ever), but that’s not a reason to stay. I would bet that with some time, you can have a friendship with him, but that shouldn’t be the driving factor here.

The kinder thing to do is let him go.

Now, as for your friend, the girl, she may just be the catalyst for your sexual awakening. If you do have feelings for her, you could certainly tell her, but break up with your boyfriend first and get a little time and space from that relationship.

Be prepared that your feelings may not be reciprocated. However, it sounds like she is someone you can confide in and relate to — someone who can be there for you as you face the reality of your sexuality.

Lastly, lean on friends and family you can trust as you go through this process. There are so many resources available online, as well. I’ve listed a couple below. If you need any other resources, don’t hesitate to reach out again. Now, end things with the boyfriend gently and with love, and explore who you are and what you want in a partner. XOXO

Coming Out As You! by The Trevor Project
HRC’s Resource Guide to Coming Out as Bisexual

The information within Ask Erin should in no way be interpreted as medical advice because I'm not a medical professional. But I am here to help — to share with you the wisdom I've gained after years of making mistakes. If you have a question for me about relationships, addiction, dating, friendship, depression, sex, consent, what I’m loving, Emerald Stones, or anything at all, use the contact form below or email me at askerin@ravishly.com. As always, your anonymity is golden. Lastly, I’m so excited to share my Ask Erin Self-Care Guide, free when you sign up for my weekly newsletter. xoxo

If you like this article, please share it! Your clicks keep us alive!
Tags
Ask Erin
advice
coming out
bisexuality
bisexual
sexuality
Relationships
relationship advice