I’m Done Being A "Good Girl" 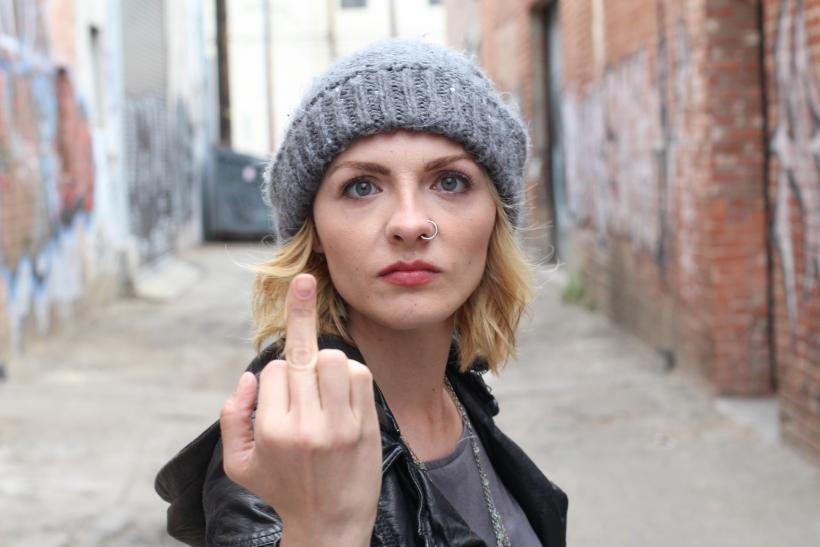 “Good girl!” I see eight-year-old me, who, in turn, sees her mom sitting at the end of a bar. She is saying it over the top of a Jose Cuervo margarita, smoldering Marlboro 100 Light dangling upside down between her fingers, ashtray poised underneath to gather the droppings, her potential suitors lined up in waiting.

Good girl, staying quiet in the corner booth surrounded by the secondhand smoke of a hundred Camels, reading your totally age-inappropriate Stephen King book, drinking your bottomless Shirley Temples with extra cherries. Good girl, telling jokes and being charming when a new boyfriend comes to call. Good girl, getting straight As. Good girl, going to church, memorizing the Lord’s Prayer and John 3:16, “For God so loved the world...” and so on. Good girl, remembering it 35 years later.

Did you ever see that movie with Julia Roberts where she can’t seem to get married? I think it’s called Runaway Bride. That’s not important; the important thing is that, in the movie, there is a scene where she realizes that she doesn’t even know how she likes her eggs cooked. There is a moment where all of her life choices sort of culminate in this “do I like eggs Benedict?” moment.

Why doesn’t she know if she likes scrambled or over easy? She’s spent her whole life eating the eggs of the people around her. She has spent her whole life shape-shifting to be whatever thing is the thing that her partner(s) need/want. She spent it all denying her own uncomfortable, inconvenient needs.

Unlike Julia, I’ve always known that I prefer my eggs wrapped like a newborn, snug inside the chewy goodness of a tortilla. Like Julia, I have never asked for them that way. My husband often cooks breakfast on the weekend. Usually he asks me what I want, and I say some version of “whatever.” He then makes the whatever, and I say “thanks” and eat it. It’s not that I didn’t want Huevos Rancheros, it’s just that I wanted a burrito more.

So why, in our eight years of marriage, haven't I ever asked specifically for a burrito?

You Might Also Like: I've Been Harassed Again And Again. Being A 'Good Girl' Stops Me From Calling It Out.

Because that’s just not a thing good girls do.

Good girls eat what is put in front of them. They stay quiet. They don’t make a scene or a fuss. They do the work. They don’t get in the way. They don’t grab the remote and pick the show. They aren’t too loud or too messy or too much of anything. A good girl wouldn’t dare to be inconvenient. Especially not over something as ridiculous as a burrito.

Other incantations of the “good girl:”

At Starbucks when I really want whole milk or skim milk or whatever is not the standard milk in a latte, but the barista just isn’t hearing me, and I don’t want to make the people behind me, the worst Starbucks orderer ever, wait, so I take whatever milk comes standard in the latte, a pairing to the laundry list of life’s disappointments.

I’m driving on the unbelievably curvy mountain road that goes to my little bungalow in the forest when I see headlights behind me and I know I’m just not going fast enough for the regulars of this road and what if this person behind me is a doctor that needs to do quadruple bypass surgery or a dad who promised his whiny-ass four-year-old he’d be home by 7 but now won’t be because I’m a lousy driver who can’t navigate this goddamn corkscrew of a highway in the dark, so I just pull over into the shoulder gravel, which is not safe or smart or necessary, and I freeze.

I’m getting a manicure, and the lady (who happens to be Vietnamese) asks if I want the nails filed round or square and what I really want is something between round and square but I don’t know how to explain it and I don’t speak Vietnamese, so I just say “whatever you think is best,” like she’s going to be the fool looking down at these awful looking nails for the next two weeks.

I’m ordering a coffee in the Dunkin Drive-Thru, and when they ask if I want sugar, and oh I WANT sugar, I want this coffee to be 65% sugar, but I don’t want them to think I’m a sugar addict or some kind of fat sugar slob, so I just say “I’ll just have it black. Thanks (enthusiastically)!!” and then dig through my purse for whatever sugar remnants might be coating the bottom and hope they are clean enough to dissolve in this, the most foul of beverages.

I’m having sex and rather than tell my partner where to put his hand(s) (including instructions about what to do with said hands that are more specific than “that’s okay”), I wiggle my ass left and then right and then up. And then I shift it 30% north in a Euclidean mathematical plane — like my sex life is just a torturous extension of the eighth-grade geometry class I spent writing notes to the boys who would eventually have no idea what do with their fingers when they finally did manage to find a willing pussy. Like that.

Look in the corners, in the out-of-the-way spaces, in the barely muttered requests, that’s where you find the good girl.

So, last weekend, Matt (my husband) was making breakfast and asked me what I wanted. And I started to say “whatever”  — whatever, eggs, pancakes, thanks-for-making-food-I-don’t-want-to-be-a-bother, how about if I do the cooking, and you sit down, whatever — but instead I stopped the word on the tip of my tongue, shut my mouth for a second, and reopened it to hear the word “burrito” tumble out. He said “okay” and cooked it and put it on a plate for me.

He had no idea that a burrito was such a meaningful food. He wouldn’t have an idea because when he wants a burrito (or Huevos Rancheros or pancakes), he just asks for it. It has never occurred to him that his needs might make me irritated or angry. He has never believed to the very center of his psyche that he is just “too much” of a person. He has never thought that being “too much” of a person can get you abandoned.

It wasn’t until the next week, talking with him about tattoos (which seems totally tangential, but is not, as you will read in a moment), that I realized the incredible power of just saying what I want — and the even greater power of doing it.

I am a person who deserves the milk she wants in her latte and who is paying $65 for a manicure and is literally owed whatever shape of fingernail she wants, even if it’s triangle.

Life happens in the small moments: in the tattoos and the burritos, among the Netflix choices and the Spotify playlists. Do you know your favorite way to eat eggs? What show do you want to watch? What playlist you’ll listen to on the road trip to the place you picked?

I am done living my life not knowing what eggs I like best. I’m done lying in bed pretending something feels fine or good when I know it could feel better. I am done being good for the sake of being good, for fear of being disliked or unpalatable or alone.

Saying what you want or need doesn’t make you “bad;” it makes you capable of recognizing that you don’t exist to bend yourself into the wind of other people.

If you like this article, please share it! Your clicks keep us alive!
Tags
self-care
selfish
woman
women
mother
motherhood