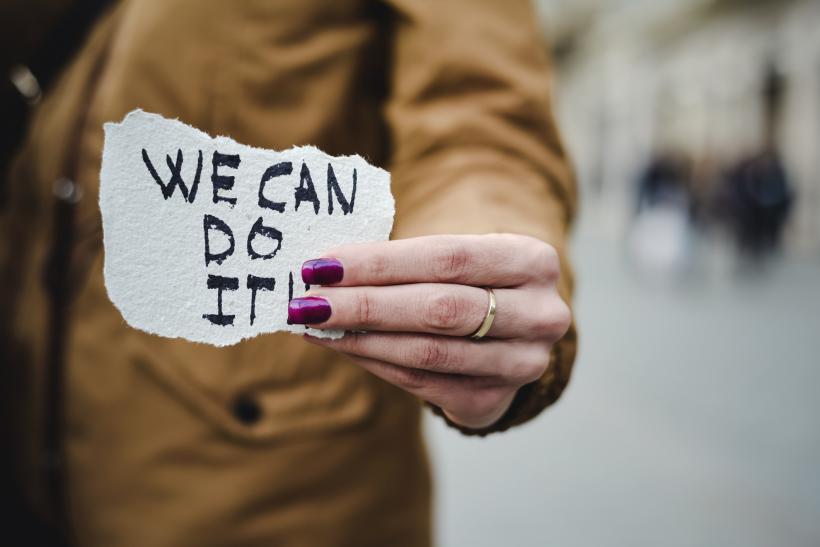 My feminism is somewhere between get a man/keep a man, and I don’t need a man at all.

My mother was not a feminist. She called herself one, and she certainly came of age during the appropriate era to identify as one. She burned her bra. She got an abortion. She made her own money at her own job. She came of age at the time that it would’ve made sense for her to be a feminist. She may have considered herself a feminist, but her actions betrayed her.

Mostly everything my mother did was to get a man, or keep a man, or steal a man. She was never without a man; all of her behaviors pointed to her desire to stay coupled, her need to be validated. I’d wake up to a new man in the house. She’d uproot us to move in with a new man. She’d divorce a man and, before the ink was dry on the paperwork, marry another man.

What I learned from my mother was a unique kind of feminism.

Not in the way you’d traditionally define it. It wasn’t about equality; it was more about utilization. Instead of modeling independence, she taught me a unique set of skills for attracting male attention.

In stark contrast to my mother’s desperation, was my great-grandmother’s self-sufficiency.

It was my great-grandmother that was the real feminist in our family. She said things like, “you don’t need a man” and “anything a man can do you can do better.” She liked to refer to the opposite sex as “forked sticks with pants on.” For every way my mother was dependent, there was an equal and opposite measure of independence from my great-grandmother.

What I learned about how to be a strong, independent female, I learned from her. I learned how to crochet, sew on a button, hem a pant cuff, make a dress, craft a quilt out of what you have on hand, and put together some of the most incredible fried chicken you’ll ever have. I learned how to mow the lawn and kill a chicken, wield a hammer and fix a clogged toilet.

She wouldn’t have referred to herself as a feminist, but the way she lived her life made her one.

She was the Greatest Generation. They had the greatest of everything. The Great Depression. The Greatest War. They conquered nations and built a nation. They were Rosie the Riveter and the Labor Union. My great-grandmother came to California in a horse-drawn wagon.

My feminism is somewhere between get a man/keep a man, and I don’t need a man at all.

I grew up with the sexual harassment that now results in legal action. My generation is the reason the movies you are required to watch during job orientations, were made. We were irritated, angered by it, sometimes even irate, but we handled it, either with a stern “NO” or a swift kick to the babymaker. It wasn’t a great time, but we endured it. We found ways through it. In the absence of a way through it, we found a way around it.

Women my age were born following in the footsteps of our mothers. Trying to fill the shoes of the Our Bodies Our Selves generation, with sexual liberation and self-awareness. We inherited a feminism we weren't exactly sure what to do with. We were told we could be anything we wanted, but we found out, in practice, that wasn’t actually the case. It was more like — you can want to be anything you want, but good luck actualizing that goal.

We tried to leave the hair in our armpits. We tried to embody the female ideal without being too feminine. We wanted to be seen as strong, capable. We also wanted to be loved. Our ethics and morality, our wants and needs, haven’t always joined together nicely at the seams.

We didn’t have the drive our mothers did behind their feminism. So we were left trying to figure out how to wear a bra and makeup and a short skirt, and still be taken seriously in the boardroom, in the bedroom, in any room where we stood with a man as our counterpart. We have tried to master the delicate balance of femininity and ferocity.

When the world refused to adopt equality, we found ways around it. We cried sometimes, but a lot of the time we pulled ourselves up by the bootstraps and paved our way. The “pull yourself up by the bootstraps” mentality is a thing we fight against now. We teach our kids empathy. We tell our sons it’s ok to cry. We tell our daughters they are more than their beauty. But that is not the life we lived.

And so our feminism is creative, cunning, sly.

I read a story recently from Fast Company about two female entrepreneurs, Kate Dwyer and Penelope Gazin, who, frustrated by apparent sexism, created a pretend male co-founder. Pretend dude, Keith Mann, was able to open doors more quickly than Kate and Penelope were. His emails were returned more quickly. He needs were met more efficiently and with higher regard.

But actual, living, breathing feminism is far more nuanced than just equality. This feminism includes how women function in the world and on what terms.

This isn’t the first time an experiment of gender or sex has been done. Many of us have heard of (or read) the viral story about the male and female colleagues who switched emails just to see what would happen. What happened? Exactly what you’d expect. That story didn’t go viral because it was shocking, it went viral because it’s reality.

This kind of behavior might leave us questioning how much feminism has achieved. Are women like Kate and Penelope only widening the gap by creating fake men instead of confronting the very people who more readily respond to an invented male? Instead of finding a workaround, shouldn’t we be calling these folks out publicly? Shouldn’t we be shaming them into compliance?

I’m sure that every viral story about how a woman was treated with less dignity than a man makes a chink in the armor of the patriarchy. I’m sure that every chink in that armor brings us that much closer to the day men will have to admit that, as granny would say, women can do anything a man can do, and better. But I’m not sure it’s necessarily the best way.

It comes down to how we define feminism.

Dictionary feminism is relatively simple — as definitions often are:

the advocacy of women's rights on the basis of the equality of the sexes.

But actual, living, breathing feminism is far more nuanced than just equality. This feminism includes how women function in the world and on what terms.

Sometimes, this kind of feminism is less “bra burning” and more “kick him in the babymaker.” This feminism is wise and knows that where a man cannot be convinced, he can often be outdone.

This is a particularly interesting conversation in online media consumption. There is value in businesses being women run and women-owned. But what if that isn’t an option? What if your reality, in online media, or in the workforce, or in your own home, is that the option to be woman-led doesn’t exist.

Or what if it doesn’t matter to you at all?

My first truly “real” job, the full-time, pay your rent kind of job, was with a real estate broker. I was 19. He was 42. He was wealthy and intelligent. He liked me. You can imagine why. I was young and beautiful — long legs, short skirts. I could not own his business, but I could utilize his resources to further my career. He put me through school, because my education benefitted him, too. At 21, I was a licensed real estate agent selling commercial property.

Not because feminism paved the way for equality but because I discovered that I was not powerless in the absence of equality. I did not have a suit. I had a short skirt. And it worked.

I’ve lived many lives since then; in the current one, I am immersed in the Third Wave. This is the wave of call-out culture, of women-run and women-led, of gender equality and nonconformity — and I work for a man.

Yes, a man funds this organization. Yes, we’ve been criticized for it. Can you call yourself a feminist if your agenda is male-funded? Yes, it is a man’s money that pays these bills and the bills of the 65 or 70 people I have writing for me at any given time.

This isn't Greatest Generation feminism. There is no threat of starvation, no Cold War, no Dust Bowl. The road we have traveled wasn't paved with a wagon. Regardless, I know my great-grandmother would be proud of me and women like me who have paved the way our own way.

That may not be what you’d like to think of as radical feminism, but it is its own kind of feminism, just the same.