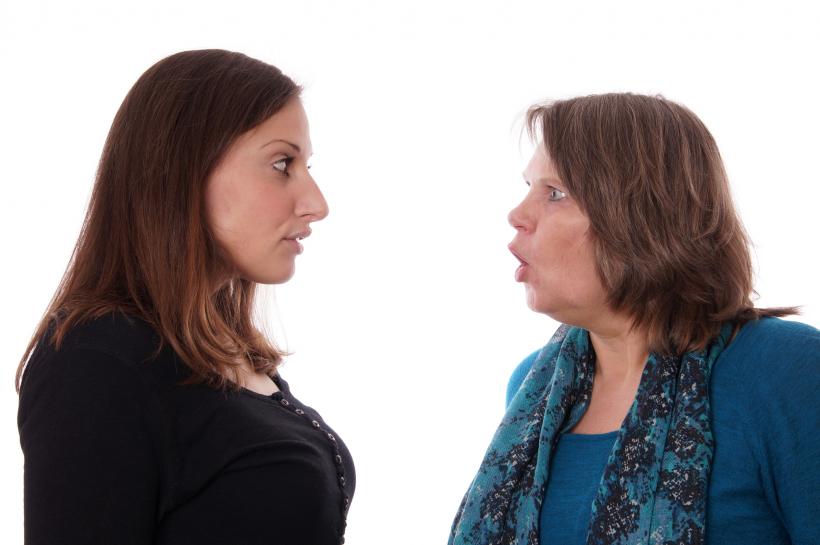 I had officially lost the battle but here's what you can do.

My boyfriend and I dated for about two years before I met his mom. Typically, meeting the parents is no problem for me. I fancy myself a parent pleaser. This time though, I knew I would be fighting an uphill battle. I was working against the fact that, not only am I six years younger, but more significantly, I’m American. Mick was born and raised in Ireland and moved to New York four years ago with a plan to stay just two years. We met three years ago… So you can see how it looks.

“At least she stopped calling you Emma,” Mick told me a week before our trip to Ireland. Emma I was no longer, but I was still the American girl keeping her boy in New York. I tried my best to impress and please. I worked on the farm, helped in the kitchen, and tried emphasizing all the other reasons Mick was in New York (work, friends), but none of it felt like enough. No matter what I did, I was still American, and Mick was still going back to the states. I had gotten back from our 10-day trip feeling defeated. I had officially lost the battle.

As hurtful as this may seem, you’re not to take it personally.

Even if it is a first for me, it’s far from an uncommon problem. “Rarely is a potential mate welcomed unconditionally without massive scrutiny and many questions from a boyfriend’s mother,” says social psychologist and author of Nobody's Baby Now: Reinventing Your Adult Relationship with Your Mother and Father, Susan Newman. “The investigation comes from the fact that most mothers feel as if no one is good enough for their child.” She explains the list of reasons why she might not like you is endless — you’re not tall enough, your job isn’t valuable, you’re the ‘wrong’ religion, she doesn’t approve of your background. Or in my case, I’m based in the Eastern Time Zone.

As hurtful as this may seem, you’re not to take it personally. “If a parent takes an instant dislike to you then it’s a fair guess that it isn’t personal,” says psychologist and author of Difficult Mothers: Understanding and Overcoming Their Power, Terri Apter. “In some cases, a parent will dislike any prospective partner a son or daughter brings home.” I guess that helps, but it still makes the whole relationship and situation difficult.

So both to selfishly help myself for our next trip to Ireland and also to help the many other women in the same situation, I asked Newman and Apter what it is we can do to help the situation.

Talk up her son.

This shouldn’t be hard. After all, you are with him for good reasons (I imagine?). Point out and compliment those things you love most about him to his mom. “Reminding a mother of how funny or smart or courteous or thoughtful her child is will be read as, ‘Boy, I did a great job of raising him…and she noticed,’” explains Newman. If you’re feeling up for it, Apter even recommends directly giving her credit. Focus specifically on behavioral traits that she could have taught him. This will give her a feeling of pride in both her job as a mom and him as an individual.

Offer to help with meal prep and clean up.

It may go unnoticed if you help out, but it will definitely be noticed it you don’t help. This small gesture is something that folks will always remember. Lend a helping hand, but never show off or take control. You’re there to assist. “Don’t ever try to one-up her with a suggestion of a better way to do something,” notes Newman. “Maintaining a neutral stance is usually the best course of action.” So simply ask how you can help during meal prep. Then when everyone finishes and it’s time to clean up, start by clearing your own plate and asking if others around you are finished. This way you don’t give them a chance to do it. If you do take this route though, just be sure everyone is in fact finished. You don’t want to rush people up, especially his mom.

Prove that you want to get to know her.

Naturally, you should always be kind, polite, and respectful. Kick it up a notch by taking a clear and direct interest in her. “Allow her to direct conversations and try to be amenable to what she might want you to do,” explains Newman. The best way to do this is to come prepared with a couple of topics you know she’ll enjoy discussing. So just ask your boyfriend what some of her interests are and use that knowledge to your advantage. “It may wind up she has only one thing that holds her interest,” explains Newman. “If you know nothing about it, get online and learn something so you can sound intelligent or so she at least understands that you made an effort.”

Encourage your partner to spend one-on-one time with his mom.

A lot of times your significant other may be hesitant to leave you on your own when visiting his family. Start by making sure he knows that you’ll be just fine on your own. Then prompt him to ask his mom to do something one-on-one. “This will help avoid any feelings of jealousy or abandonment on her part,” says Newman. “You may have to give him up for a few short hours to win her over and win him permanently.” If you’re looking to win over some major bonus points, “remind him to tell her that you suggested they have dinner or spend the day together without you.”

Talk to your partner about it, but ease into the conversation.

It’s completely up to you whether you want to discuss the whole situation with your partner. You don’t have to, but it could help to have him give you tips and advice. In the end, if you do choose to do bring it up, broach to topic calmly and rationally. “Try an innocent, ‘I don’t think your mother likes me that much,’ approach,” says Newman. Then, listen to his side of things. “Don’t get defensive, just let him tell you what he thinks of the situation.” She says that he might explain that that’s always how she is, which is something you should take at face value.

“He may be completely oblivious that critical appraisal makes you uneasy,” Apter points out. She further explains that he might not want to talk to you about it because in doing so he might feel like he's disloyal to his mom. This is another reason why easing into the conversation will help. If it seems like you’re attacking her, he might close off to the discussion altogether, which isn’t helpful to anyone.

With all that being said, Apter notes, “if it is a serious relationship and if his mother is disrespecting you, then he should be encouraged to join forces with you in showing her that you and he are a couple.”

If you like this article, please share it! Your clicks keep us alive!
Tags
dating
families
parents
mothers and sons

Getting Through My First Year Without A Dad
Emily Rekstis