Love, Alexi: How I Prepared To Use Tinder With Every Self-Help Trick Out There 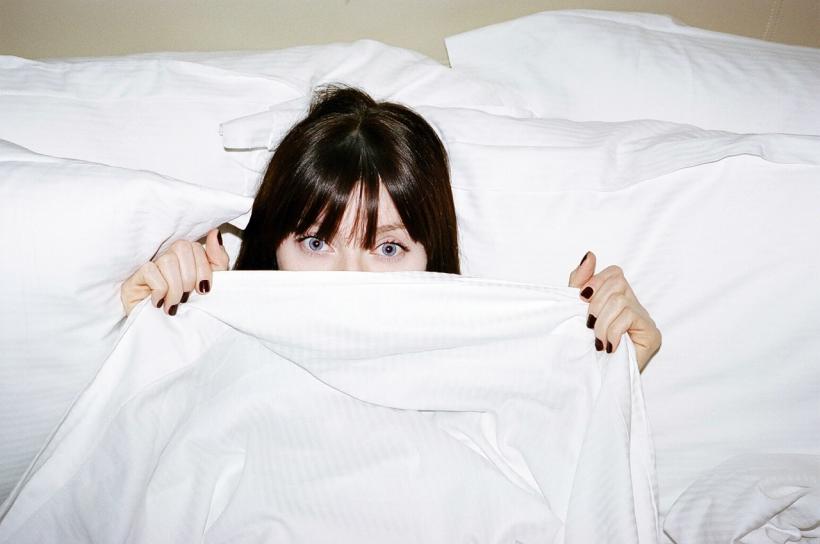 After taking about a four-month sabbatical, I was finally ready to date again. I’d been doing a ton of emotional work. I read way too many self-help books and did a lot of journaling & hypnotherapy (via Lacy Phillips,  founder of Free & Native). I needed to access my subconscious and face all of the hidden, limiting beliefs and false narratives that were quietly running my life. I 'd been unaware of these beliefs that made it so I continuously, unconsciously sought out/attracted/and actively dated men who weren’t right for me and, more importantly, were straight up BAD for me! I needed to stop attracting unhealthy emotional matches.

I needed to heal myself.

Did any of that make sense? I’m paraphrasing. I’m also NOT a neuroscientist. Then again, neither is Lacy, but she knows what she’s talking about. Check it out for yourself (I swear, these workshops are NOT a cult; only my ENTHUSIASM for the work and its results feel cult-like, but relax, it is NOT a cult! Unless you want it to be. But back to what I was saying…).

In addition to the courses, I’d been journaling and reading every self-help book I could get my hands on.

Personally, I prefer to listen to my books and am always incredibly thankful when the person who WROTE the book narrates the audio version as well. It just makes me feel cozier and closer with the author, and the information they’re spewing lands better and is way more meaningful in my brain. But that’s just me. I listened to (and even visually READ, old-timey style, when they weren’t avail on audio) the following: Codependent No More, Getting The Love You Want, You Are A Bad Ass, A Return To Love, The Dark Side Of The Light Chasers, Having It All, Catching The Big Fish, The Untethered Soul, and Sex and The Single Girl.

As well as several of my favorite (non-self-help) Carrie Fisher books, read by Carrie herself: Postcards From The Edge and Surrender The Pink.

I had Whitney Cummings as a guest on my podcast, and she highly recommended I read: Leaving The Enchanted Forest: The Path From Relationship Addiction To Intimacy and Getting To I Do.

I’m well aware that the latter sounds like the most ridiculous, backwards book and conjures up an image of a woman clubbing some guy over the head and dragging him to the altar… but it isn’t, I swear! Turns out, Getting To I Do is about what energy you lead with when entering a romantic relationship — male or female energy. Every person has both masculine and feminine energy and it’s about knowing who you are and what kind of relationship you want for yourself. Further, it explores the kind of energy you exude and the energy you prefer leading with, in a romantic relationship, as well as the energy you prefer in a romantic partner. It talks about how to speak up for yourself and get your needs met. Sure, it’s def sexist here and there, but I took only the good and left the rest. And let me tell you, it’s a secret weapon! Man, I love old-timey relationship books! They’re so fun and surprisingly helpful in a time when every type of relationship is a possibility, and you have to get honest with yourself and be clear on who you are, what you want, and then go after it.

Having read all these books and finishing workshops, I was starting to wake up and notice patterns and choices I had made in my dating history that now seem so obvious.

I wrote list after list. I wrote a list of what all my exes had in common. While at first glance they may have seemed different, they were all brutally similar and shared at least one or all of the same characteristics: emotionally or geographically unavailable, addict, narcissist, outsiders. The MAJORITY were JUST out of a relationship (which = emotionally unavailable 101), and MANY of them shared the same profession and had the same first name initial. This was fascinating stuff. Once you see your patterns, you can’t unsee them. It would be too embarrassing to make the same choices again. I was conscious now. I was awake. I could see myself.  And I wanted something different.

I didn't want to date someone for the wrong reasons anymore as I had in the past — status, good looks alone, the fact that they were kind of neat or interesting and pursued me intensely even though I could see a million red flags and was unsure if I even liked them at all. OR they were an unavailable person who was more a game to play/a prize for me to win over. No. That all sounded unappealing, unhealthy, and exhausting to me now.

What was it I hoped to find now? Intimacy.

Someone I felt myself with. Someone I felt happy and calm with. Someone I was attracted to, but with depth added. A friend I could laugh with, be quiet with, talk to about anything, and have epic makeouts and the best sex with. Honestly, I really just wanted a kind person I could trust with my heart, who would cherish me and vice versa. I wanted something safe and loving and respectful and grounded. I wanted someone I could depend on, who would mean what he says. Someone with morals and integrity, who was honest and didn’t lie. I wanted something good and healthy, but not boring, never boring. I wanted someone kind, thoughtful, loving, available, reliable, consistent, grounded, and real. Oh, is THAT all I wanted? Ha!

Uh oh, did I just make you vomit? Wait, come back!

I also did this list-making exercise:

During one guided hypnosis sesh,  I visualized all my exes sitting around a campfire and then I mentally/ metaphorically/ symbolically pushed all of them into a fire. It felt GREAT! I think I even jumped in the fire too after, just to start over and have a psychic rebirth or whatevs! It was exhilarating.

The final part of one of the workshops encourages you to get out into the dating world, even by way of dating apps like Tinder so that you can start passing ‘tests.’ ‘Tests’ refer to showing the universe you are grounded enough in your self-worth to walk away from something less than what it is you want.

OK, OK, I could do that! I felt happy. I felt whole. I felt grounded and ready to pass tests! But Tinder? Ugh! Even though there’s technically no more negative stigma attached to apps anymore, cuz it’s the future or whatever, it still felt kinda gross and scary! As if putting myself on that app would expose me and make the world see me as some desperate, vulnerable, aged, single LOSER!

But that was my ego talking, right? Everyone’s on Tinder, right?

Like, who cares? I could just reframe the whole thing in my mind and TOTALLY be the casual, chill, blasé person I’d never been before, and sign up for Tinder like it was no big deal. After all, who knows WHERE you might meet your person?! All it takes is one! And that one could be on Tinder RIGHT now, with all the same reservations as you/me… but a willingness to take a chance! RIGHT???

Now full disclosure. I’d checked out Tinder a tiny bit in the past. You know what I mean. You’ve done it too: That fleeting dalliance where you sign up to peek and then delete the app just as quickly as you downloaded it. I’d done that in the wee hours of the night, usually over the holidays when I wanted to people watch and needed a loneliness eliminator.

I’d loved the feature that allows you to recommend a Tinder profile to a friend via text. My girlfriends and I would use one another for courage, serving as cyber wing women for each other. That part was a blast. But, I never took it seriously or committed. I never knew what I wanted when I was playing with the app back then. It was just silly. I was judgmental, and that’s no way to take part in something.

But this time I was gonna be discerning with who I swiped right on. I was ONLY gonna swipe right on men who sounded nice and who I was animalistically attracted to.

Yeah, you heard me: ANIMALISTICALLY!

Full FULL disclosure: Prior to this, the only dating app I had ever been on was something called Raya. What’s that? Well, I like to refer to it as “Illuminati Tinder” or “the Soho House of dating apps.” Raya is a very small pool, members only dating app, and one that thinks you're able to jump on a plane on a whim to meet your fedora wearing DJ billionaire match in New York or Morocco. However, while I’d made friends and met nice people on there and had a handful of two or three-month mini attempts at relationships, it was elitist and curated and all tapped out for romantic possibility as far as I was concerned. There were too many narcissists, famous, professional bachelors on yachts who I didn’t trust and wasn’t interested in… or had already dated! No thank you. I wanted to shake myself up and out of my rut comfort zone, take a REAL chance, and dive into new territory. And (for me) Tinder was a huge, terrifying, unknown, mainstream playing field.

I took out my phone, and with all my newfound self-worth and intentions inside me… I fucking did it! I downloaded the app and started surfing those wild Tinder waves like nobody's business!

If you like this article, please share it! Your clicks keep us alive!
Tags
Love Alexi
Alexi Wasser
self-help
dating
single
Tinder

Love, Alexi: How To Start A New Relationship Without Totally Freaking Out
Alexi Wasser