Intuitive Eating In Austin: Tacos And Donuts And More Donuts, Oh My 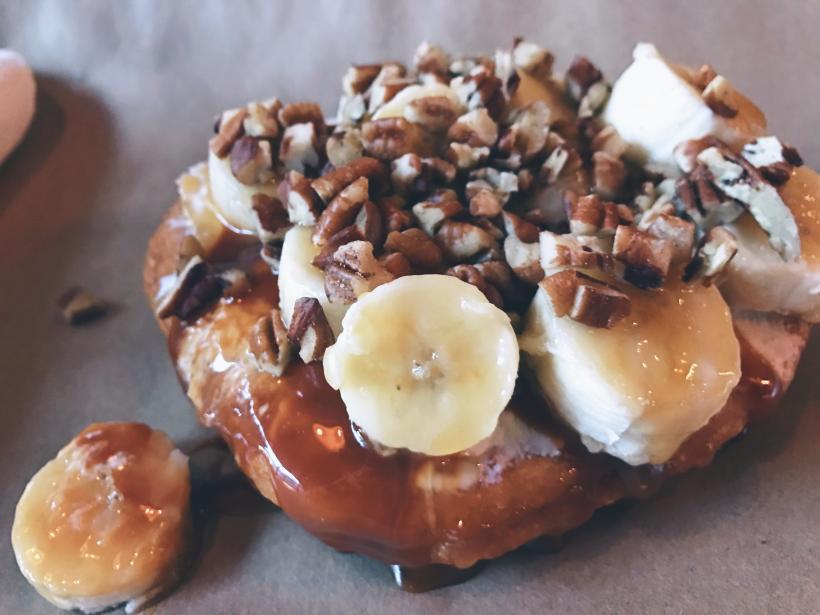 If donuts are a true culinary gift, Gordough’s is culinary Christmas morning.

Two weeks ago, I went to Austin. Folks (or maybe just the citizens of Austin) call Austin the live music capital of the world. I did not see any live music while visiting. I did see a lot of food — primarily donuts and tacos.

I don't think Austin has more donuts that any other major city, not when you consider donuts as a food category overall, but I do think Austin donuts are better than most. What I also think is, if I had been looking for live music I would've found it, but what I was looking for was donuts... so I found those instead.

The complexity of the ask/answer/respond accordingly intuitive eating stratagem is compounded by the presence of kids/partners/other people to whom you provide care/food, further compounded by the time/space/capacity to get up to make food at all, and even further compounded by a lack of money/resources. Even if none of these factors are in effect, it’s still radical as shit when you consider that a lot of people just inhale whatever is in front of them/readily available/easiest/fastest.

Travel is another possible compounding factor. Without access to a grocery store or refrigeration, your meals are at the mercy of your whereabouts.

My trip to Austin was part donut pleasure, part scouting for a possible move next year.

Because I had no children, and no agenda, the real estate, but more importantly the donuts/tacos/queso were mine for the taking — in whatever quantity I desired because I’m the boss of me, thank you very much.

Day one did not start with donuts. Not because I wouldn’t have eaten a donut, but because I had places to be.

I spent an hour navigating Austin’s public transit system (there is no Uber/Lyft), which can only be described as a total nightmare, to get to a massage appointment I’d made the week before. I used Yelp to point me to a not awful breakfast place, but new things are hard for me, and I was late for the appointment because buses are stupid in Austin, so when I got to the counter, I panicked. What even IS intuitive eating? I’m LATE.

The menu only had 15 or so breakfast items (one of which was “oatmeal”), but even 15 was too many, so I looked at the cashier desperately and said “I need something with protein and carbs. And caffeine. I need caffeine.” I don’t know if that was intuition or just fallback because of the panic, but proteins and carbs are a universally safe choice.

I ended up with a better-than-really-good bagel sandwich, with bacon and some ridiculous genius apricot glaze (which was served in a piece of biodegradable paper with actual metal utensils) and a he-uge latte. I ate on the ground in front of the massage place.

Is a parking lot the ideal location to eat breakfast? No. But sometimes life isn't ideal. In fact, a lot of the time life isn't ideal. When you read about intuitive eating, it can seem a pretty daunting task to have to stop to think so carefully about a thing you would typically have done while standing in your kitchen and simultaneously scrolling Instagram. Don't let that need for strict adherence trip you up. IE can work wherever you are. It might need some modification, and you might need to give yourself a wider range of what you'd consider body-honoring practices, but that's okay. There is no wrong way to listen to your body. There is no wrong way to eat.

Better-than-really-good bagel sandwich was enough food to get me through my 90-minute massage, a foot scrub, an hour wait for a bus, and an hour bus ride back to the center of the city.

For dinner, I Yelp’ed a taco place in walking distance on South Congress, and my husband and I each killed two tacos. They were outstanding, as you’d expect, and I certainly could have wedged another one in my gut somewhere, but I didn’t. Because I wasn’t hungry.

How did I know I wasn’t hungry? I asked my body.

There is a version of me that would have shoved another taco down the hatch and spent the rest of the night feeling like my heart was on fire and trying to run away from my stuffed stomach by way of my mouth.

This is not that version of me. I’ve edged her, and her Zantac, out of the picture.

Instead of inhaling three tacos, I mindfully ate two. This is not hard to do, once you reteach your brain that it’s not the thing in charge. That part is hard though. I might have inhaled that third taco. If I had inhaled that taco, the worst thing that would have happened is I would have felt like garbage. One taco will not make or break your life.

Do you have any idea how many meals I’ve inhaled? 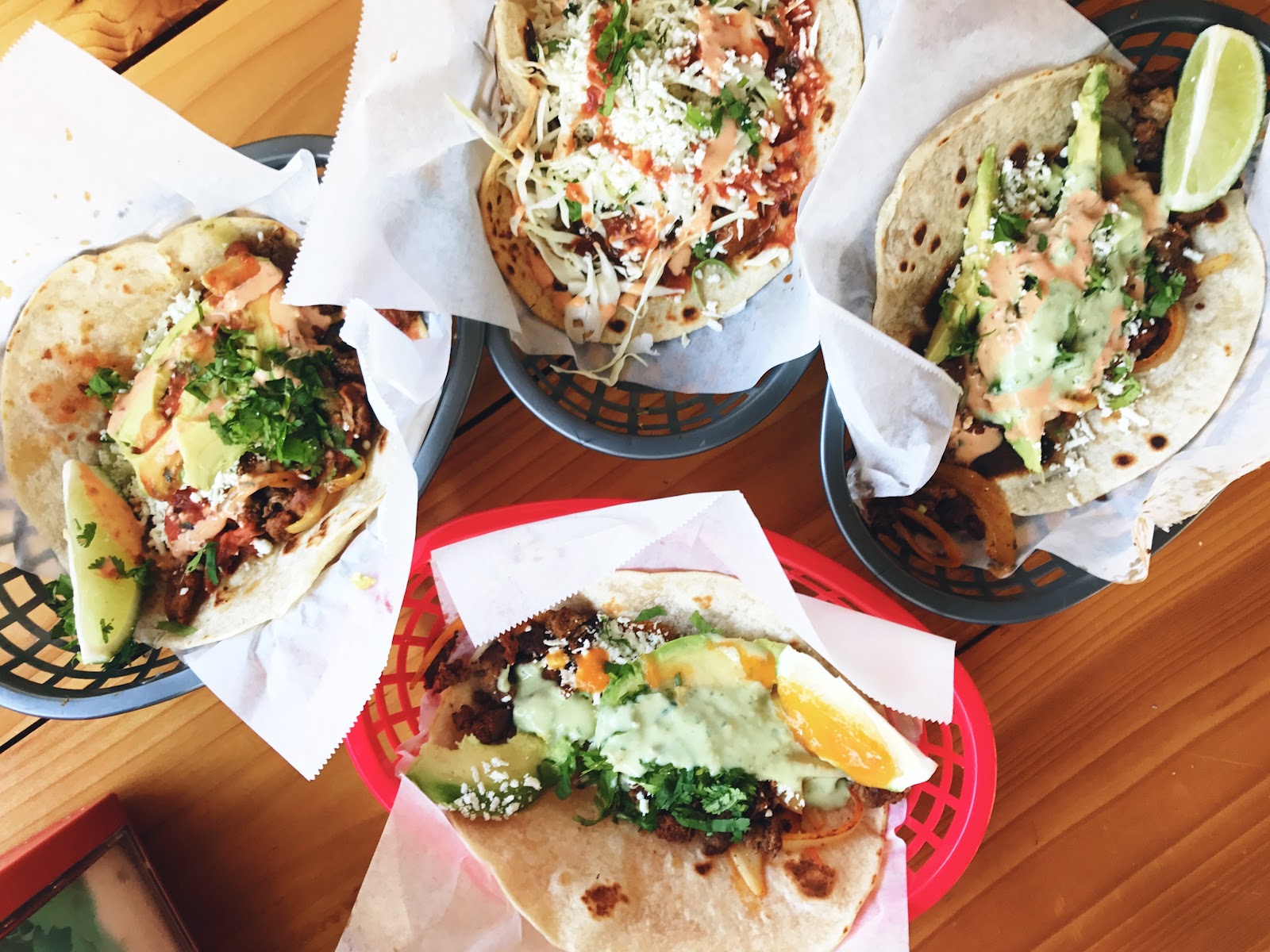 After the tacos and some peaceful conversation (a thing we don’t get much of), we rented some Google bikes and took a ride to peruse the hipster happenings and find the first of the Gordough’s donuts.

If donuts are a true culinary gift, Gordough’s is culinary Christmas morning. I ordered the donut version of strawberry shortcake.

And this is where previous me would have panicked. Not at the tacos, but right here: 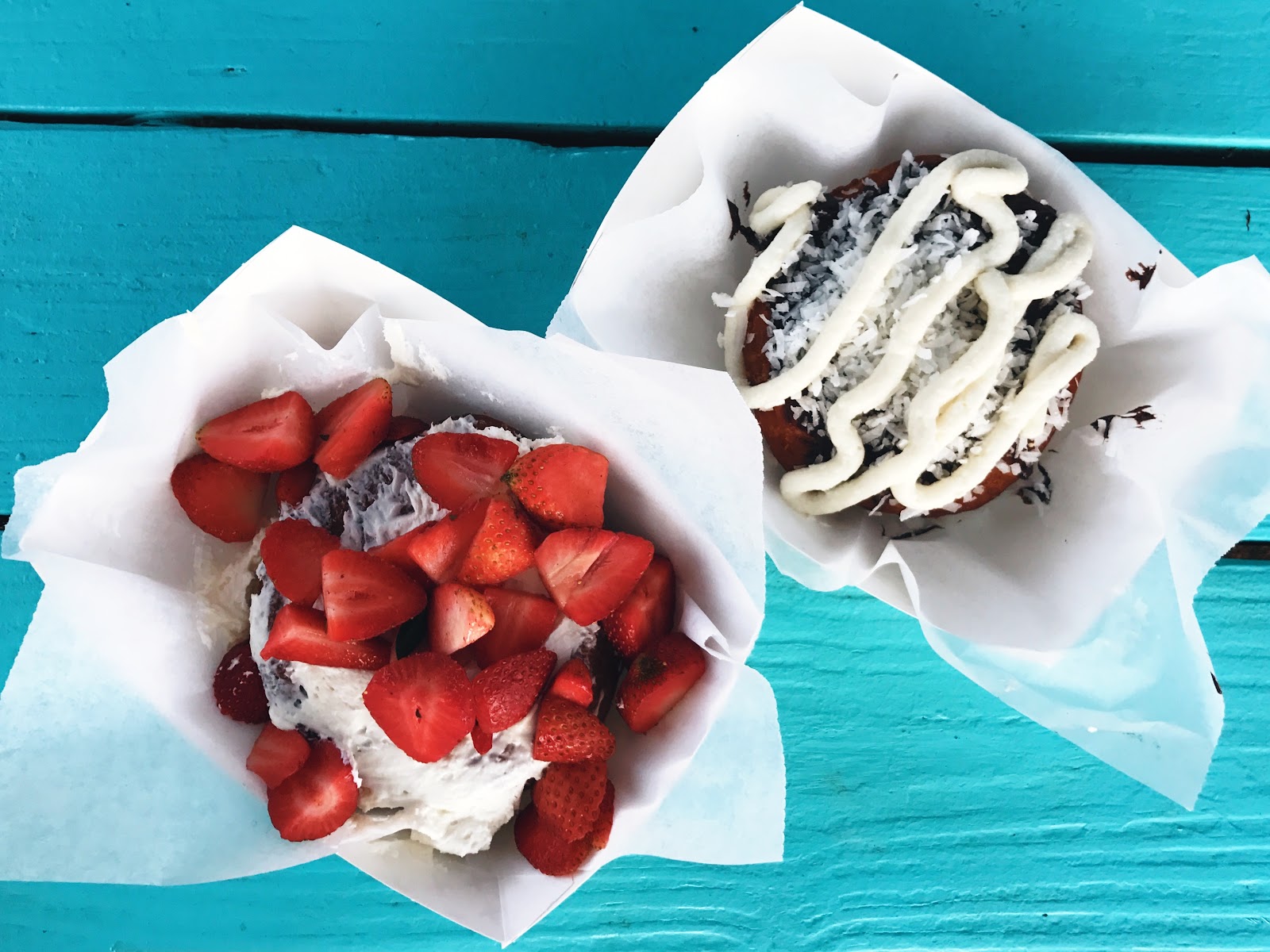 I was prepared for the panic. Since I’d been thinking about the donut for about six months, I was ready.

If you think planning to eat a donut, when you aren’t even in the state the donut is in yet, is ridiculous, it’s only because you don’t love donuts like I do. But this is often the case for those of us who really love food. Food is necessary, but it’s also central to so much — our celebrations, our traditions, our treasured family moments, and definitely our vacations.

In the case of such a temptation, it would seem logical to avoid food entirely.

But staring down a “weakness” food is a sort of immersion therapy for me — the only way out of donut panic is through.

So that’s what I did. I sat with the donut I’d been planning since fall.

And then I ate it. Most of it, but not all. Why didn't I eat it all? Because I was full.

I didn’t do any of this for a few reasons:

1. I trust my body to answer my questions about what it wants, honestly.

2. I trust that even if the answer is DONUTSDONUTSDONUTS, that is okay.

3. I deserve to enjoy myself. Enjoying myself does not involve not eating.

I know what you’re thinking:

1. I don’t know how to tell my brain from my body. Aren’t my body and brain the same thing?

2. I would never stop eating the donuts. I would eat them all.

And here’s what I will say to that:

1. Yes. Sort of. Of course, you’re using your brain. The difference is, you’re not letting whatever screwed up notions about food and weight and health you’ve internalized over the course of your long, and possibly full of diets, life, get in the way of your biological needs.

2. You’ll probably eventually be too full to eat any more donuts. And if you’re not, you will probably feel like shit. If you are listening, this is your body saying, “Um yeah. Hi. Can you NOT DO THAT PLEASE.”

3. So what? Really. SO WHAT. You’re trying to undo a lifetime of shitty behavior around food.

If you like this article, please share it! Your clicks keep us alive!
Tags
BBA
BB&A
Beyond Before & After
intuitive eating
Travel
eating
Food