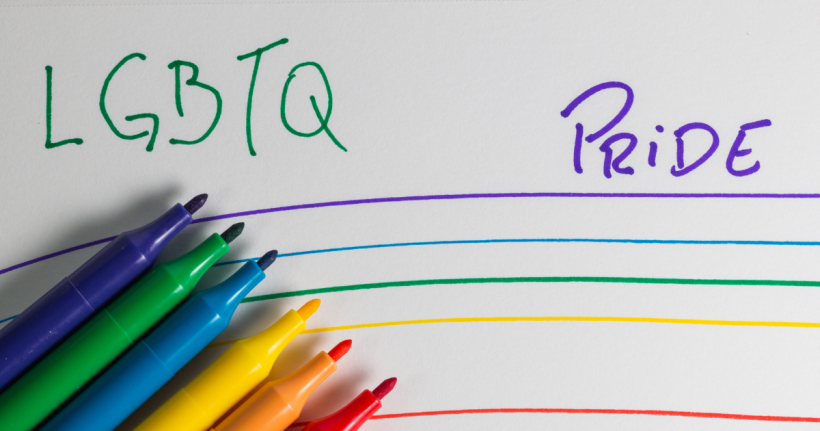 The children, said in unison, “What’s National Coming Out Day?”

I didn’t wake up with a plan to talk to my kids about what it means to “come out.”

I was standing at our kitchen island, taking gulps of ice cold water and washing down my meds one pill at a time, scrolling the news, when I saw that Facebook released a feature allowing folks coming out to announce it similar to the way you announce a new relationship — as a major life event.

My husband was standing with his back to me stirring steel-cut oats and grinding beans for coffee. Between pills, I said enthusiastically, “Look at this new feature Facebook released just for National Coming Out Day.” The children, who were sitting at the bar drinking milk and eating bananas, said in unison, “What’s National Coming Out Day?” That’s when my comment when from casual to teaching opportunity.

I paused, cocking my head the way I do when I’m thinking (or irritated), the last of my meds in one hand, my cup of ice water in the other. How do I answer this question? I am never at a loss for words, but I wanted to choose the right ones. I wanted to make sure that the message I sent was that being gay/lesbian/bi/trans/queer was perfectly normal, while at the same time, driving home the point that not all people see it that way, which makes coming out such an important or even scary event for people.

We always talk about how all families are different. Some have two moms, some have two dads. Some have just one parent! We just recently got this great book What Does A Princess Really Look Like?, by Mark Loewen. The book features a little girl working out what it means to be a princess, and she just happens to have two dads. It’s not the focus of the story, it’s just the fact of her family. That’s the way we talk about LGBTQ folks — just like we talk about cis straight folks.

But to explain what it means to “come out” and why coming out is so hard sometimes? That’s a different beast.

I whipped around to face him, “I’m sorry, WHAT did you say?”

He looked at me puzzled, “I mean they didn’t ask about it, don’t you think they are a little young for this conversation?” [They are six and eight.]

“Um, No,” I replied, furrowing my brow and swallowing the last pill, “Why are they too young?”

He paused, “Well, I mean, you know I believe it doesn’t matter, I mean, I'm with you, but I was just thinking maybe the kids don’t need to know that yet?”

I wrapped up the conversation with the kids, packed my backpack for second grade, and out the door we went. As I drove, it gnawed at me. I’m convicted in my approach, but I wondered why he was convicted in his. How young is too young to talk to your kids about things like this? I’ve always maintained that your kids deserve to know the truth of the world — at their level of understanding, but the truth nonetheless. I’ve always been honest with them. We talk about Trump and politics. We discuss religion and the different ways people worship and believe. We talk about everything really, why not this?

From the back of the van, Ella shouted over the Kids Bop, “HOW DO YOU SPELL NATIONAL?” I spelled it, looking at her in the rearview mirror; her head was down, her pencil moving quickly.

When we got to school she was holding her diary in her hand. “I wrote about National Coming Out Day. But it’s in my diary so it’s my private thoughts just for me. Okay?”

I think my husband’s reaction says a lot about what is culturally ingrained in us. That being gay is primarily a sexual experience and that kids can’t handle that. I’ve already raised three kids. I’ve already done the sex talk and the gay talk and the drug talk — multiple times each. None of those things are difficult for me to approach anymore. I don’t blame him for his reaction; he hasn’t had to confront any of this yet.

But I think Ella’s reaction says a lot about kids — they actually can handle it. Not just that — they need to hear about it.

If you like this article, please share it! Your clicks keep us alive!
Tags
LGBTQ
National coming out day
Parent
Kids
pareting advice