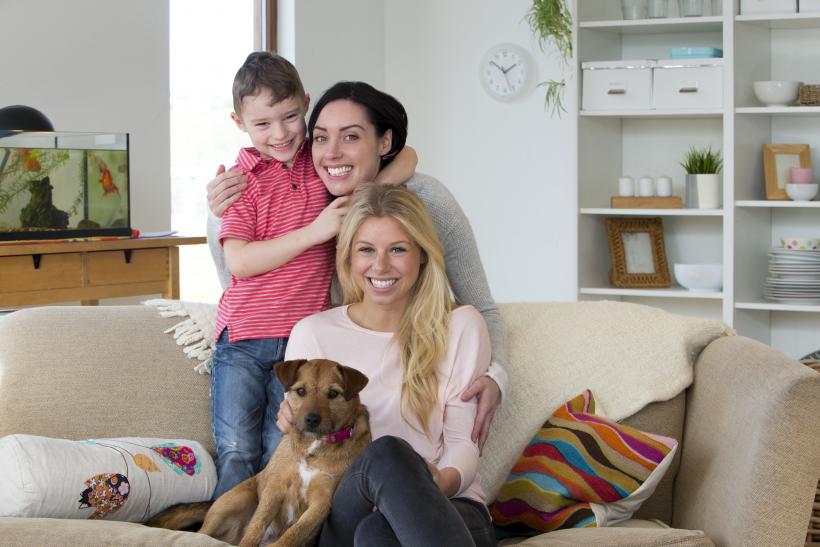 In recent years, there’s been a lot of talk about LGBTQ representation in the media, and for a good reason. There are just more explicitly queer characters and plotlines than there were in the past, and that can be exciting, especially for those of us who grew up in a world in which queerness was a bizarre “other” that we never heard mentioned. While sitcoms such as Modern Family and This Is Us include gay people, kids’ media has also seen more LGBTQ representation than before. Liberals and progressives often celebrate these victories of inclusion, like the first gay cartoon kiss and that time someone on the Disney Channel had two moms, and they’re right to be excited that not everyone is straight on TV anymore. That said, as a queer mother who watches some TV with my kid, I worry that our excitement (over a media world that is better than it once was) ignores the fact that it still isn’t nearly enough.

That may sound harsh, but the reality is that the shift is happening slowly; for queer kids, and kids of queer parents, it might be too slow.

The good news is that, while when I grew up, gay characters were limited to sitcoms and other shows for adults (and then often were the butt of jokes and painted with stereotypes), kids today have the chance to see queers during their regular TV time. In 2016, Nickelodeon’s Loud House featured a married gay couple, Cartoon Network’s Clarence once had a gay (on the cheek only) kiss and later included a character with two moms, and apparently The Powerpuff Girls even had an episode with a transgender horse in it. Far more shows have hinted at queer relationships on screen, and in the case of Legend of Korra and Adventure Time, those relationships have been confirmed by the creators elsewhere, though they weren’t explicitly stated on the show. Then there’s the magical world of Steven Universe, which includes multiple queer and queer-reading relationships. I haven’t seen more than a couple of episodes myself, but apparently, if the reactions from my gay friends are any indication, I really should.

That said, the majority of children’s programming still sends the message that heterosexual is normal and desirable, and anything else is at least a little weird. The vast majority of shows and movies for kids do not feature any explicitly LGBTQ characters or any characters with LGBTQ parents. Those that do are likely to be secondary characters rather than main characters — if they are recurring characters at all (often they’re not). They also tend to be some of the most privileged people in the LGBTQ community. For example, if a character happens to have two mothers, the odds of those moms both being white and cisgender are incredibly high. Speaking of trans kids, while we celebrate victories over gayness showing up in children’s media, kids with transgender parents, or who are transgender themselves, enjoy way less media representation. And while we applaud networks like Nickelodeon for including several gay characters, on more than one show, it’s worth remembering how many shows Nickelodeon actually has.

And of course, the majority of the shows that do include any queer representation at all (no matter how minuscule) are geared at older kids. Shows for preschoolers and other little kids are far less likely to wade into this territory, mainly preferring to stick to the safety of primarily heterosexually paired parents, or whimsical worlds in which parents aren’t really a thing. So the puffins on Puffin Rock have a mama and a papa, whereas on Sarah and Duck all of the kids roam freely with various pets and pet-like objects (there’s a girl who just carries a plate) unencumbered by caretakers. Neither of those shows is bad — they're both quite good, actually, and my kid loves them. But they’re illustrative of a point, which is that when my kid sits down for some coveted screen time, he’s seeing a world in which either everyone has a mom and a dad, or parents are beside the point. Both of those worlds are counter to his own experience of having two mothers. And I worry that all of that will slowly chip away his own confidence in his family.

If it’s helpful for kids to see their cultures and families reflected to them in the media they consume, surely it would be helpful even before the age of seven?

It’s not hard to see why some networks and television creators might shy away from LGBTQ representation for young people. When kids’ shows do incorporate gay and queer characters, there’s often a swift backlash from conservatives and homophobes. When Good Luck Charlie included two lesbian moms, One Million Moms March immediately launched a Disney boycott. It doesn’t appear to have hurt Disney very much, but it’s not unthinkable that networks sometimes try to avoid just such a reaction. And especially when it comes to younger kids and the programming geared at them, we’re all inheriting the old (and deeply homophobic) idea that kids of a certain age are just too young to know that queers exist.

I’m not trying to rain on anyone’s parade, or put a cloud over anyone’s gay TV rainbow. As a queer adult, I’m happy and excited to see more LGBTQ representation in the media in general, and in children’s programing specifically. It’s exciting to think that the next generation of kids won’t think what I thought about queerness, which was that it must be really bad, since almost no one would talk about it (especially with kids). But as a mother, and specifically a mother of a child with two moms, who is already noticing that he doesn’t see families like his very often, I want to push for more.

I’m happy things have improved, but when I look at my kid, I know an even better world is possible, and I want that for him.