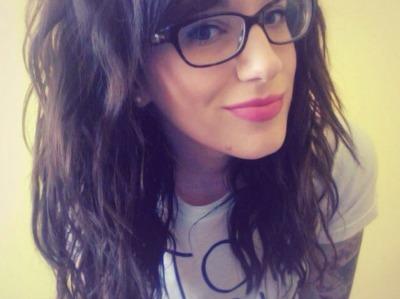 Body positivity is Melissa Fabello’s forte. Whether she’s vlogging about eating disorders and the media or writing about sexual positivity, Fabello's focus on self acceptance is nothing short of amazing. A sex educator with a Master's in Human Sexuality, she has a website, a vlog and is an editor for Everyday Feminism. She has more side projects than we can count and she's working on her PhD, too.

We recently got a hold of Fabello and asked her a bevy of questions about her work, her connection to feminism and vlogging as a method of spreading her message of body positivity.

Your videos are such a breath of fresh air! You're incredibly open about your own life struggles as well as the struggles of your friends, family and readers. How did you first become interested in vlogging and how does vlogging help leverage your cause and contribute to the body image dialogue?

My foray into the world of vlogging was really a complete accident, certainly not something I was expecting to keep up with. After I saw the 2010 documentary Miss Representation, I was inspired by their call-to-action campaign, where they accepted submissions of videos explaining how you wanted your marginalized identities to be better represented in the media. I had fun making the video, so I started making more, mostly just me rambling about some feminist issue that I was thinking a lot about and posting them on Facebook for my family and friends. Then The Representation Project (who was responsible for the aforementioned film) said they liked my stuff and asked to start promoting it. The rest is herstory.

What I like about vlogging is its free form. At the end of the day, different media are going to be more suitable in different arenas, and while writing is certainly my first love (I’m actually trained in fiction writing, sort of a departure from social justice), videos add a layer of personality and inflection that can be hard to get across in non-fiction or more journalistic writing. And in this fast-paced world of technology, I knew that videos would be more easily accessible, in terms of entertainment, to young people, who are usually my target audience.

You have a lot to say (and we love to listen!) But if you had to distill your message into three sentences to share with the world, what would they be?

Haha! I always have a lot to say. If you ask my parents, they’ll tell you I’ve been this way since I was a kid. My mom still says I talk just to hear myself talk—maybe that’s the secret reason why I started making videos. But in three sentences? “You are more than just a body. Your experience is valid. And you’re allowed to speak your truth.”

You cover so many topics on your website and your vlog—everything from feminism and sexism to media and body perception. Where do you get your ideas? How much is academically/statistically focused and how much stems from personal experience?

I try to do a little of both. I’m an academic working on my PhD, so I think it’s incredibly important to back up your statements and to show that you’re well-read in the topic that you’re discussing. It helps audiences trust you, and it also legitimizes you to other academics. That’s definitely something that I feel strongly about—being accessible to both the everyday person, as well as to professionals in the field. But I think the personal angle is important, too, because it humanizes you and gives off the vibe that you’ve been there, that you get it and that we’re all on this journey together.

My ideas for what to cover come from everywhere, mostly, whatever I’m particularly interested in at the moment. If I’m in the middle of writing a paper, for instance, I’ll usually use the same research to make a video—those tend to be the ones with more statistics in them—or if I had an experience that bothered me, I’ll use my frustration to write a script, and those are the videos that end up being a bit more ranting. But it’s basically like, “What am I thinking a lot about lately?” And then boom. A video happens.

You are a large part of Everyday Feminism, too! As an editor and contributor, you have your hands in all sorts of feminist-y media. Has your definition of feminism evolved since becoming involved with EF? What would you say is the biggest takeaway from your personal feminist journey?

My feminism has evolved to unbelievable levels since getting involved with Everyday Feminism, and I am so, so grateful to everyone in that community and to the platform for really changing my values and shaping my feminism. The biggest impact that Everyday Feminism has had on me is its focus on applied feminism – not just talking the talk, but really walking the walk. Sandra Kim founded the site because she noticed how many awesome feminist websites were out there doing critical commentary and using feminist theory, but that there wasn’t anyone saying, “Hey! This is how you can apply feminism to your everyday life!” And I just love that angle so much because it’s so useful. As an educator, I love giving people tools – and that’s exactly what Everyday Feminism does every day. Overall, though, it’s hard to say what the biggest takeaway from my personal feminist journey has been; feminism has honestly completely changed my life. I compare it to a born-again religion in that way: One day, I discovered feminism, and then I just wanted to spread its gospel because it gave me a way to see the world that gave me hope. And I think that was the biggest thing for me – becoming a feminist in the first place. Starting this journey has been the most important part of it. I’m forever grateful for feminism for finding me when I needed it.

Do you have any more projects coming down the pipeline that we should be watching out for?

Oh, absolutely. Right now, I’m in collaboration with the National Eating Disorders Association doing a project called #marginalizED, where we’re working to curate an anthology of eating disorder stories that go against the dominant narrative paradigm—stories from marginalized communities that are often left out of the eating disorder conversation. Submissions are open until August 15th, and you can find out more here.

You have a Master of Education in Human Sexuality, but I just read that you’re currently working on your PhD! What was the catalyst for wanting to further your education? And of course, we have to ask—how do you have time for all the projects you’re involved in while you’re in the program?

The real question is: How do I have time for the PhD? I certainly wouldn’t say that it’s on the back burner by any means, but considering my jobs pay me and allow me to live, I kind of have to put those first. Adding random side projects on top of all of that – like vlogging, writing, and the project with NEDA – is really just a testament to my ability to manage time really well. Education is important to me. Obviously. I’m an educator myself with two degrees in Education already; I always knew that I would eventually get the “ultimate” degree. In fact, I applied for the program without telling anyone; I kept it a secret from even my family. And when I got the acceptance letter and had to tell them, my brother’s response was literally, “Oh. I mean, that’s awesome, but I’m not at all surprised.” I just love learning – and I don’t care if that’s dorky to say.

What can we do, as individuals, to make it easier to withstand negative societal pressures masterminded by mainstream media?

Sigh. Boycott it? No, I’m just kidding. That’s actually not my form of activism at all. The thing is, the media is a force unto itself. We’re probably not going to stop the media. Instead what I think we can do is combat its messages. I’m a big proponent of media literacy education – teaching people how to critically analyze what they’re consuming so that they can unlearn and resist the brainwashing.

Do you have any advice for other women that are interested in pursuing higher (and higher higher) education?

Here’s my honest advice: Do it if you feel the drive to do it. If you don’t, that’s okay, too. Do you have a question that hasn’t been answered yet, and you’re itching to do the research to figure it out? Cool. Go for your PhD. But if you’re just as happy sitting at home with a good book or a documentary or some enlightening conversation, that’s education, too, and I don’t think that we need to create a hierarchy where certain kinds of education are more valued. Education and intelligence are not the same thing.

What do you do for fun when you’re not busy with your projects and your PhD?
Fun? What’s this “fun” you speak of? Actually, I luck out—though I'm chatty and loud and sassy and brazen, I’m actually an introvert. I recharge through alone time or really-intimate-friends time. So, for me, fun is a cup of tea and a good novel or taking a walk to the farmer’s market or getting brunch with a loved one. I’m easy. And I like it that way.