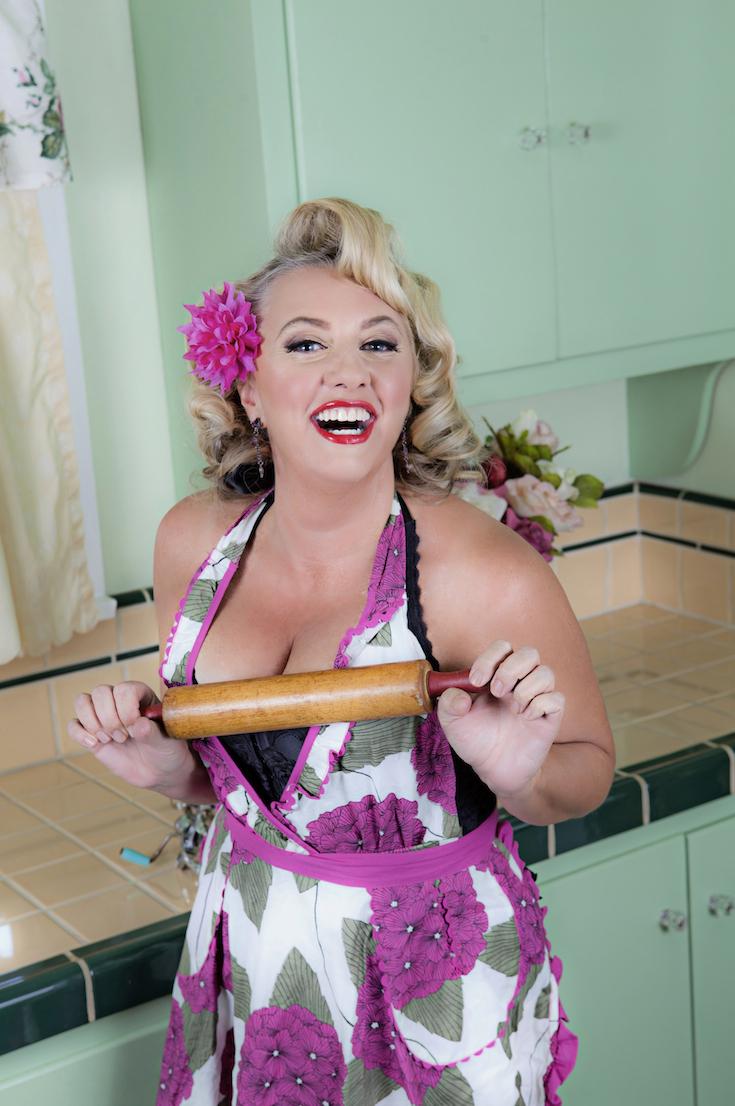 Move over, Betty Crocker, there’s a new gal in town. Tracy Hammond is the “beauty” behind the “beast”— Feed the Beast: Cooking for Your Alpha Male, a witty and wise new cookbook. You may know her as the better half of comedian Joe Bartnick (who’s funny lady Lisa Lampanelli’s opening act), but there's much, much more. Hammond was born and raised on the mean streets of Bangor, Maine and began cooking at an early age. During summer breaks from Syracuse University, she waitressed at the best lobster shacks in New England. Hammond also cooked professionally as a class manager at the now-defunct San Francisco cooking school “Home Chef.” This busy businesswoman and Jill-of-all-trades took a breather to share her kitchen chops — and life lessons — with Ravishly.

When did you realize you were drawn to Alpha Males?

As far back as I remember. I think there’s something in our evolution that attracts us to loud, hairy Alphas. The first chapter of Feed the Beast explains exactly what an Alpha Male is — think DeNiro in Raging Bull or Brando in A Streetcar Named Desire. It also examines the evidence of the Alpha Male’s existence in primate society.

How did you and your Alpha Male soul mate meet?

Joe was the loudest guy at the bar. I couldn’t help but notice him. There was a line of guys in dark business suits watching a hockey game and then there was Joe in a black leather jacket. The minute I saw him it was like, I want that one. He finally came up to me at 3 a.m. and introduced himself with, "Want to come home and watch TV with me?" I said, "Really? Does that line ever work?" I was actually insulted. I went home alone, watched TV by myself and thought, why am I not watching TV with that cute guy? It took about three months for us to get together because I thought Joe was trouble. Every time I saw him, he was with a different girl. Eventually, I gave him a chance.

How did you tame him?

After awhile, Alphas want to settle down. My equation is: Time + Too Much P*ssy = Ready for Marriage. But keeping your Alpha Male well-fed is the best way to keep him — and keep him happy.

How did this lead to Feed the Beast?

It’s a kind of Alpha Male ‘how-to’ book. Like a lot of us, Joe gets low blood sugar and gets crazy when he’s hungry. I would literally throw food at him to get him back to normal. It’s a lot like throwing red meat to a lion in zoo. I found that Joe was easier to handle when he had a full belly. You’d be surprised at how many arguments low blood sugar causes. This tactic has worked for me for more than 18 years. Back in Vermont, I was a newspaper writer and reporter, so I combined my cooking and writing skills to create Feed the Beast. 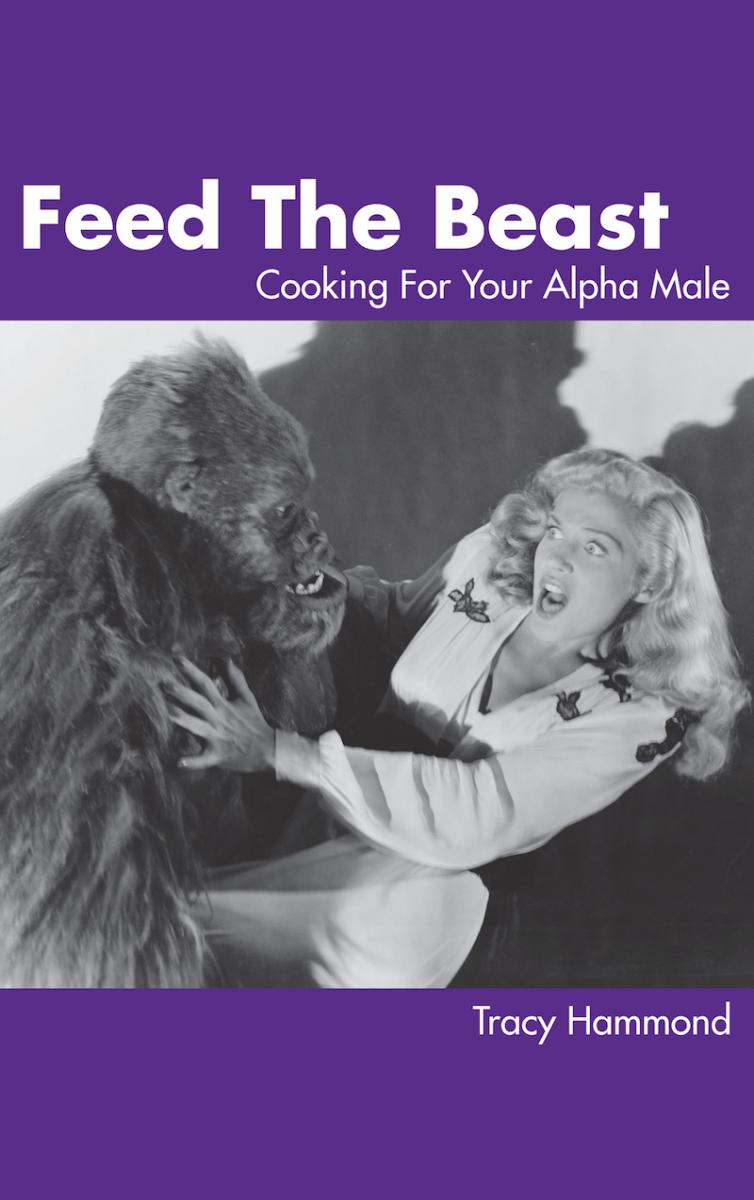 Where do the recipes come from?

They’re inspired by my ‘go-to foods’ over the years. I wanted to develop a source for delicious, hearty meals suitable for a Cro-Magnon man like Joe — or for anybody. My food background is rooted in the simple French techniques made popular by Julia Child, but I package it in an easy-to-understand format. You don’t have to be a culinary school graduate to make anything in the book. They’re tried and true staples. Hanging out with friends, everyone would get late-night munchies. I made sure to have certain ingredients on hand so I could whip up a simple, satisfying snack at a moment’s notice. Why go to Taco Bell at midnight to eat crap when you can make incredible quesadillas in a snap? It’s cheaper and the quality of the food is far superior. People don’t understand how easy it is to make eggs. Packaged meals are great but they’re astronomically expensive. Plus homemade is healthier since you have total control over what goes into it.

Feed the Beast is such a unique cookbook. It has amusing anecdotes followed by foolproof recipes. How did that format come about?

I wanted to give the stories behind the dishes, not dole out step-by-step instructions. It also lists any special equipment you’ll need before you start to cook. There’s nothing worse than getting ready to bake a cake, then realizing that it calls for a springform pan and you don’t own one.

Your book also looks different than other cookbooks with its wonderful retro feel, vintage photographs and illustrations.

I love the pinup era and burlesque. When I was discussing book design with my publisher, we considered all sorts of alternatives. Since Feed the Beast is so unconventional, the traditional cookbook with glossy pictures of each dish didn’t seem to fit. I started thinking about how we could interpret it another way. I began researching old cookbooks and going through vintage stock images. I was amazed at the wealth of possibilities. The end result is very campy and tongue-in-cheek with a combination of photos from the 1930s, '40s and '50s and wacky ads for things like beer and French fries. Even the blonde on the cover with the gorilla looks a little like me.

What are some of your favorite recipes?

It’s hard to pick just one. My Breakfast Burrito is killer and great any time of day. Then there’s my Drunken Bird and Fake-Bake Chicken. Not only does Feed the Beast have hearty meals but kick-ass salads and veggie dishes, too. And, of course, Italian recipes, since Joe’s Italian. In fact, there’s a whole chapter called ‘I Wish I Was Italian.’ I’m a big fan of buying — and cooking — in bulk so there’s always something around to eat. For example, I always have a batch of my EZ Beans in the fridge and homemade tomato sauce in the freezer.

What’s your response to women who might think the book is sexist — that it’s all about taking care of a guy?

That couldn’t be further from the truth! I’m not telling women to get behind the stove for a man; I’m telling them to do it for themselves. It’s better for you and tastes better than take-out. I come from generations of strong, feminist women. Since I was little, I was told I could do anything and succeed in anything. When I was growing up, my mother made more money than my dad — she was a high-powered real estate broker. [She was] the original Super Mom; she did it all, but she hated cooking. Mom was the queen of Stouffer’s frozen TV dinners. That’s why I started cooking at age 10 or 11. As soon as I could read recipes and could be trusted with a stove, I fed my family. I began experimenting with fun cuisines you couldn’t get in Maine — Chinese food, Indian food. My mom was really grateful and always gave me encouragement. To this day, when I go home for a visit, I cook for everyone. But despite how it sounds, I’m not Susie Homemaker. I can’t stand cleaning, so I don’t do it. Joe does most of the childrearing, while I go out to work at a big tech firm every day. Joe’s an artist, so his work is cyclical. Somebody’s got to have health insurance! I guess it’s an unconventional relationship but it works for us. 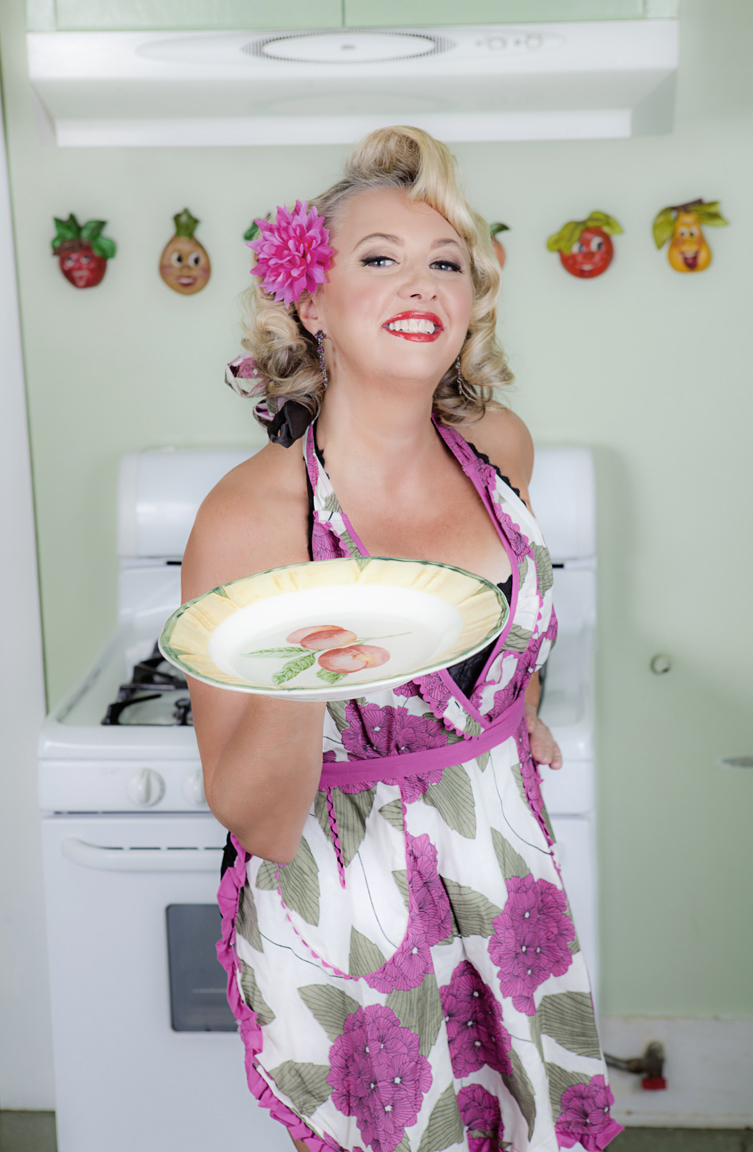 How are you promoting the book?

Social media. I’m also involved in the podcast site ‘All Things Comedy.’ Joe co-hosts a show on it called ‘Insensitivity Training.’ I did a segment in early May on ‘Book Me, Please’ which is on iTunes. Then there’s old-fashioned bookstore events. My publisher is setting up readings all over LA. There’s a big one called “Volossal Night,” coming up at Book Soup in West Hollywood on June 26. It features many Volossal authors, mostly female. I’m also hoping to do a national book tour and talk shows.

To me, the bottom line is: cooking makes sense. We’ve all got to eat. It’s the one thing that’s constant — if we don’t eat, we die. Feed the Beast just makes good eating easier, especially if you’re wrangling an Alpha Male. I truly believe that we’re all just hairless monkeys. We aren’t as evolved as we like to think. In the book, I say, ‘The bottom line: there is food and there is sex. That’s all we really need to get by.’ Both are key for our survival.