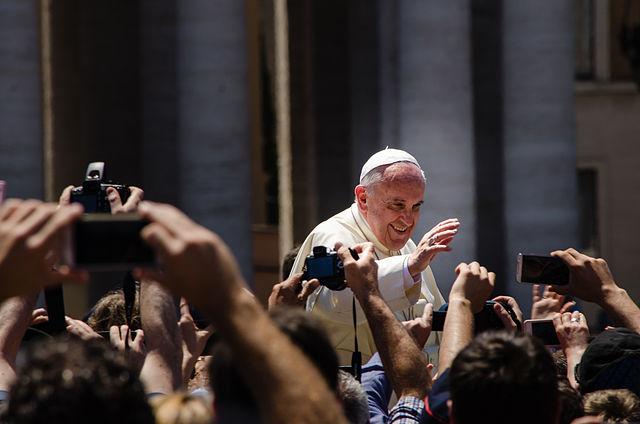 Remember how a couple of weeks ago we talked about how the Catholic Church is looking for exorcists? The best exorcists they have are older priests and there aren’t any younger priests wanting to be trained in exorcisms to replace them? Well, looks like we should amend the exorcist —and general priest — search to say “Boys only!”

For hundreds of years, only men have been allowed to be ordained as priests in the Catholic Church. Yesterday, Pope Francis indicated that there’s no path to changing the status quo. When asked about ordination of women by a Swedish reporter, the Pope definitively said no. Pressed whether he meant forever, he said, “If we read carefully the declaration made by St. John Paul II, it goes in that direction.”

Theologians have long argued that because Jesus only chose men as disciples, he meant the priesthood to be only for men. Saint John Paul II solidified that position back in 1994, writing, “The exclusion of women from the priesthood is in accordance with God’s plan for his Church.”

I’m no theologian (or historian or sociologist, for that matter), but I’m pretty sure Jewish women in the Middle East in the final century BC didn’t have a lot of leeway to run off and become the disciples of messianic preachers. It might just be that Jesus didn’t have any women applying for the position. It might not have been a theological choice at all.

For now, Catholic hierarchy doesn’t seem ready to consider female priests, though they have been talking about ordaining women as deacons. Deacons can perform many of the functions of priests, including officiating at weddings and baptisms and preaching at Mass. Women were once allowed to be deacons but in recent centuries have been prohibited from holding those positions. Pope Francis convened a commission to study the possibility of the reinstitution of women deacons in the future.

It’s probably safe to say that none of us reading this today will have the opportunity to be Catholic priests unless we’re dudes. A loss for the Church, if you ask me. Women bring so much to any organization, after all.

If you like this article, please share it! Your clicks keep us alive!
Tags
Pope Francis
catholicism
religion
Catholic Church
sexism
religious sexism