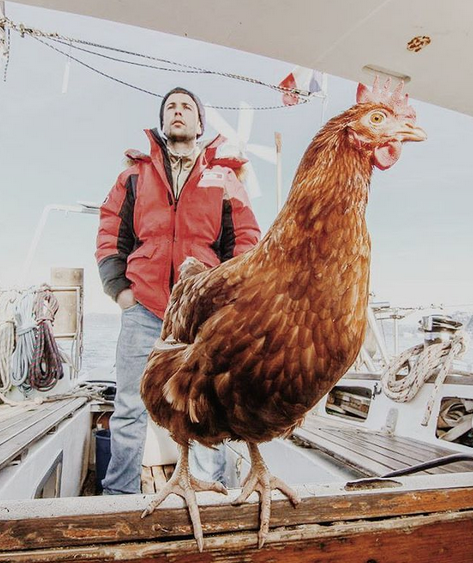 Adventure on the high seas! Those words bring forth images of rugged men, standing on deck as the wind whips their hair. They gaze into the sunset, plotting their course to destiny accompanied by their beloved pet… chicken.

While the pirates of old were famous for having parrots on their shoulders, Instagram sensation Guirec Soudée, a 24-year-old Frenchman, has spent two years sailing around the world with a bird of a different feather — his pet chicken, Monique.

Soudée adopted Monique from the Canary Islands when she was four or five months old and she’s been sailing around the world with him ever since. His Instagram feed shows the two of them at sea, in ice and snow, basking on Caribbean beaches, and gazing at the Aurora Borealis.

While he worried a bit at first how Monique would adjust to seafaring life, he says she’s been fine. "[She] doesn't need that much looking after, and I'm able to get eggs at sea.”

This week the oceangoing duo have been posting gorgeous shots from Greenland. The two of them will be headed for Alaska via the Bering Strait next. After that, they don't know.