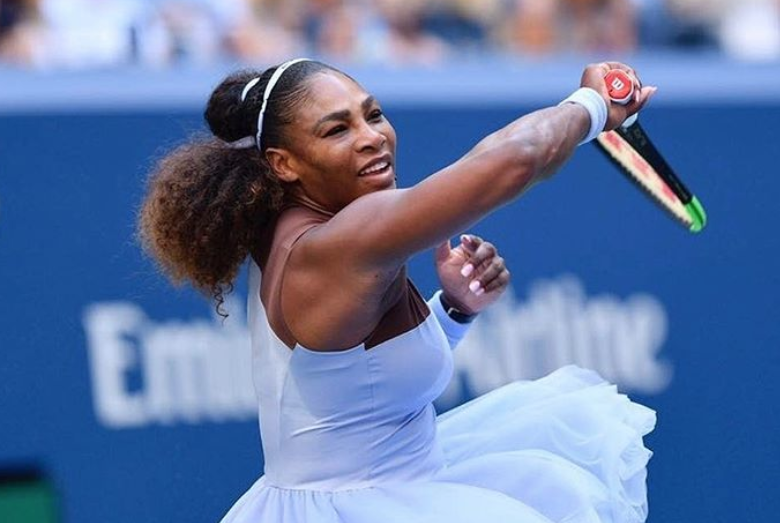 Presenting the sports news of the weekend (and perhaps the year): Serena Williams’ U.S. Open Championship loss to Naomi Osaka.

The world is reacting (rather vociferously) to what started as regular old tennis and ended in sexism, racism, and overall patriarchal BS. Serena was the favorite going into the match, which would have been her 7th US Open title (putting her at the top of US Open Women's winners) and her 24th Grand Slam overall (tying her with notorious homophone Margaret Court). Instead, the night ended with "inexplicable" officiating (in quotes because it is quite easily explained), a furious and justified rant on Serena's part, boos from an equally incensed crowd, and a tainted win for Osaka.

As a quick review, here’s how it went down:

Serena was initially given a code violation warning by the chair umpire (the guy sitting in the high chair) for being "coached" from the stands (a practice that is illegal, though rampant, and rarely penalized.)

Coaching or not? This is the question #Mouratoglou #SerenaWilliams #usopen pic.twitter.com/vHMNwkHSq6

"I don't cheat to win, I'd rather lose," she yelled at umpire Carlos Ramos.

More drama here!! @serenawilliams NOT taking any nonsense from the Umpire!!#USOpen pic.twitter.com/EwDd6rhT4j

Serena ends up losing that game which led to an angry racket smashing and a point penalty (and a total of $17,000 of fines [about the balance of my student loan]). The racket smash is unfortunate and unsportspersonlike. But not unusual, and again, not usually penalized.

Another game loss leads to another angry rant (and what the umpire calls a threat): "For you to attack my character is wrong. You owe me an apology. You will never be on a court with me as long as you live. You are the liar. You owe me an apology. Say it. Say you're sorry. How dare you insinuate that I was cheating? You stole a point from me. You're a thief too.”

This leads to a game penalty (which is not a small thing) and ultimately to a loss of the match and a media explosion about the validity of the call, the necessity of her rage, and the sexism of tennis.

This isn’t the first run-in Carlos Ramos has had with a player, but it is the first game penalty. In 2017 he went at it with Rafa Nadal at the French Open, handing down two warnings for slow play (if you’re not a tennis fan, you should know that Rafa bounces the ball about seven hundred times and then has to pull his shorts out of his crack at least twice before he serves.)

Tantrum-y (and even really terrible) court behavior is not new to tennis. Remember John McEnroe for goodness sake?

Oh and here's an unpenalized racket smash for you:

Roger Federer and his potty mouth in 2009:

Roger Federer in the 2009 US Open Men's Final.
Curses multiple times at the chair umpire and tells him: "Don't f-cking talk to me." pic.twitter.com/hmiuGbrdNe

I’m upset Serena lost, but there is something more important going on here than just a win.

It’s some blatant sexism paired with some internalized racism.

Ramos simply couldn't handle it when Serena (a woman) acted with power and aggression; those are strictly male moves. This strength is a very real, very visceral threat to the masculinity of some men (Ramos clearly among them). Is it a surprise that a man in a power position would put a female player in her place?

(2/2) When a woman is emotional, she’s “hysterical” and she’s penalized for it. When a man does the same, he’s “outspoken” & and there are no repercussions. Thank you, @serenawilliams, for calling out this double standard. More voices are needed to do the same.

But, to Serena's credit, it’s not just sexism and racism, it’s now feminism too. I believe it’s Serena’s potential sacrifice of a title to call it out.

She could have just shut her mouth and played on, but she didn’t. She’s arguably the best female tennis player ever, do you think she really can’t control herself on the court? No. She chose not to.

Rather than add another notch in her championship belt, she literally took one for the (female) team and called the umpire out for what he was — sexist. She could have paid her $17,000 and stayed quiet and perhaps taken home the trophy, but she didn't. She stood up for herself, for her daughter, and for the future of women in sports. This wasn’t an accident, it was a calculated move to elevate the game of tennis and to bring worldwide attention to something that happens both on the court and off — and I'm here for it.

Sure, Osaka took home the trophy, but Serena is taking home the heart of feminists everywhere.