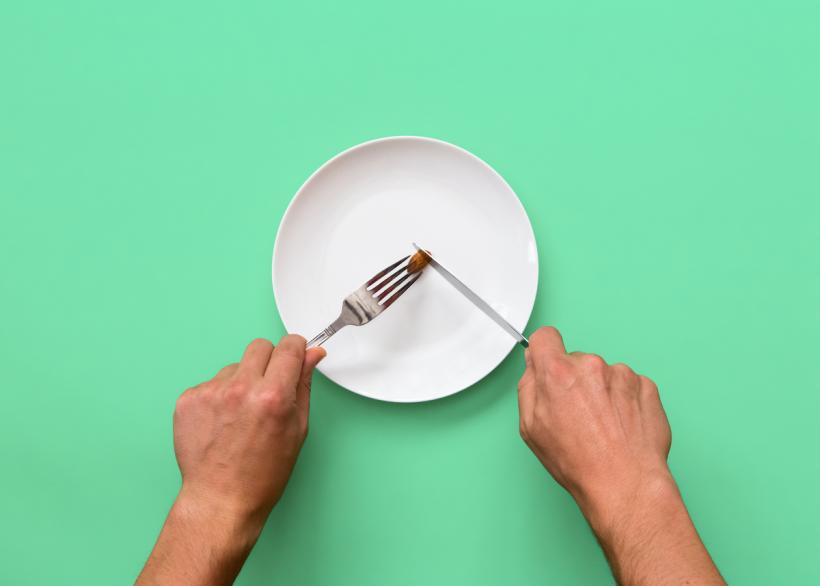 Eating disorder recovery isn’t magic — at least, not at first.

The very first time I entered anything I could call recovery from anorexia, I made it about three or four weeks of eating the amount of calories an ambulatory adult woman should before I panicked and backed out. I knew I couldn’t go back to eating nothing — and, frankly, my willpower vanished as soon as I started to regain a significant amount of weight — but I was too afraid to keep eating the amount of food my body needed to repair itself and for my metabolism to kick back in. I was too afraid that it wouldn’t work.

I spent what seemed like endless miserable months rapidly adopting and dropping different diet regimens and habits, in a sort of hail-mary to see if my body would magically melt off weight again the way it had when I was seventeen years old and all but stopped eating entirely.

Magic, it turns out, is just science at a higher price.

In terms of losing weight, some things worked and some things didn’t. In terms of healing my mentality and rejoining the world of the happily-and-not-obsessively-living, every single one of these things actively did damage and held me back from recovery. They were all replacements for my eating disorder, and they were all equally, if not more, miserable.

If you find yourself engaging in any of these, don’t add more guilt to your plate: it’s so, so normal for your brain to try and justify adopting another rule-ridden lifestyle to replace your eating disorder. But the sooner you recognize it, the sooner you can call yourself out and boot it.

1. My Body Is A Temple, Even Though I Trashed It For Years: Clean Eating

There’s so much to be said about the insidiousness of clean eating, and a lot of people have said it way better than I could. So I’ll sum up the major offense that the “lifestyle” commits: clean eating is just an extremely clever and socially acceptable disguise for fatphobia.

Let’s walk through how it does that:

Which is effed up. Don’t engage. And call it out when you see it.

2. I’m Terrified Of Sugar, So I’m Going To Detox By Drinking Only Juice For Several Days: Juice Cleanses

When I was still heavily restricting my food intake and I found out about juice cleanses, I couldn’t have been more psyched. Eating exclusively fruits and vegetables in liquid form was an acceptable diet to adopt? Great! I was on board.

Except, I realized, even the freshest juice made with wholesome plant matter is going to be 100% sugar. And sugar was one thing that I actively avoided when I was restricting. And a lot of the micro-cultures that adopt juicing — fit-fanatic demographics of New York and LA, for starters — are also sugar-fearing, which is presumably why they do things like turn to keto and paleo diets… and juice cleanses.

I don’t think that juice is bad, or that sugar is evil. I do think, however, that claiming your motive for adopting a juice cleanse is because you want to “cleanse” your system makes absolutely no sense. Your nutrient profile on juice is one-dimensional, and juicing fruits and vegetables without including their skins or peels often strips them of many of the vitamins and other benefits that juicing touts.

What you’re left with: the cleansing aspect that commits the same offenses as clean eating, and the promise of weight loss — which actually just ends up being a lot of lost water weight and muscle mass.

3. Good News, I Have Abruptly Become An Ultramarathon Runner!: Overexercise

This is a particularly insidious trap, because exercise is great! Exercise is good for you. And it’s so hard for so many people to get into a regular workout rhythm, so why would you dissuade yourself anytime you feel like throwing on your running shoes to hit the pavement or the gym?

Just as it can be easy to let exercise habits slide and wind up spending every evening on the couch for weeks straight (as I have been lately), for some of us, it’s equally easy to steadily ramp up exercise and fail to recognize when we’re going too hard. For those of us who restrict, it’s also too easy to “forget” to increase our calorie intake as we increase our exercise.

This is also the trap I fell into — over and over — that I was most dishonest with myself about. I’d get to a point in my recovery from anorexia where I was finally willing to increase calories — and I’d simultaneously start going on runs that were regularly upwards of 10 miles, several times a week, where before I’d only run 4-5 milers. When I recognized that I was running so much in reaction to my food intake, I successfully curbed my personal half-marathons — and subsequently found myself fitting three hours’ worth of walking into each day, telling people it was a great way to save money on metro fare.

I wondered for months why I felt so excruciatingly exhausted all day, every day. Mornings in particular were challenging: where I used to spring right out of bed at my first alarm, I became incapable of waking up prior to the thirteenth, with no recollection of having turned the previous ones off.

These days, I’m keeping myself to a schedule of exercise three or four times a week, max, alternating between short runs and bike rides — and I feel worlds better. It’s amazing how much you can get done when just waking up doesn’t use up the bulk of the energy you have for the day.

4. I Woke Up Today And Realized The Animals Are Suffering And I Am Just Horrified: Going Vegetarian/Vegan In Recovery

First things first: I am by no means saying you can’t be a healthy, recovering/recovered vegetarian or vegan.

What I am saying: a lot of us who have made an art of cutting out fear foods under the guise of adopting some kind of socially acceptable lifestyle or cause (going paleo, claiming gluten sensitivity, worrying about lactose intolerance, sudden eco-consciousness, abrupt desire to eat exclusively local ingredients in a place with a dearth of the same) should be very, very honest with ourselves about why we’re doing what we’re doing.

Think of it this way: you may care about animals, but if you spend more time thinking about avoiding weight gain than you do thinking about suffering animals, you might not be in a healthy position to make this lifestyle change.

5. Crazy How Lots Of Water And Forty Calories Fill Me Right Up!: The Master Cleanse

When I had just started to recover, then started to get scared, I hung out with a friend who told me she’d recently done the Master Cleanse.

“It was great,” she said. “I felt lighter, more awake, and more energetic by the end. I actually felt so good I did it for like a week instead of three days.”

When she said this, my rational brain went: That sounds super unhealthy for anyone — ESPECIALLY for you. You should not do this.

But the part of my brain determined to find a new, innovative way to drop weight again and avoid eating in a less-obviously-anorexic way went: Bet you could do two weeks.

I did it strictly for two weeks. Then I began eating food again, but only infinitesimally small amounts, for about two months. Then I passed out twice in succession in a restaurant in San Diego, hit my head each time, and walked around the next few days with a black eye, a light concussion, and, for the first time, genuine fear for my life.

I hate that I even did this, and I shouldn’t have done it. The only good thing that came from the ordeal was that, for the first time, I realized that starving myself posed a very real risk of damage not just to my body, but to my brain. And I wasn’t okay with that.

I’ve been recovering in fits and starts, with each attempt better than the last. I’m guilty of throwing myself into each of these methods, and have been incredibly and deliberately delusional about my recovery.

Recovery isn’t magic — at least, not at first. But guess what has helped me feel everything that all of the above quick-fixes promise and don’t deliver: more light and energetic, better about myself, and freed from obsessing with food?

Eating. Just eating. Not limiting myself in terms of calories or types of food. Not chastising myself for anything I eat.

I’m managing to do this by reminding myself, every hour of every day, that my body needs food not just to survive, but to do all the things I’m excited to do: see my friends, start projects, build my freelance client base, write stories, play music, do experiments in cooking that I actually get to eat. And, when I feel like it, to run and bike around.

It’s definitely not easy. And for a very long time, I was unconvinced that it would be worth it. But if you’ve gone to such great lengths and taken such huge risks to try and adopt any of these pretty miserable lifestyles, you really might as well give the age-old method Eating The Food You Feel Like Eating a try.

Bad Bosses: A Guide To Excusing Yourself From Abuse
Molly Guinn Bradley